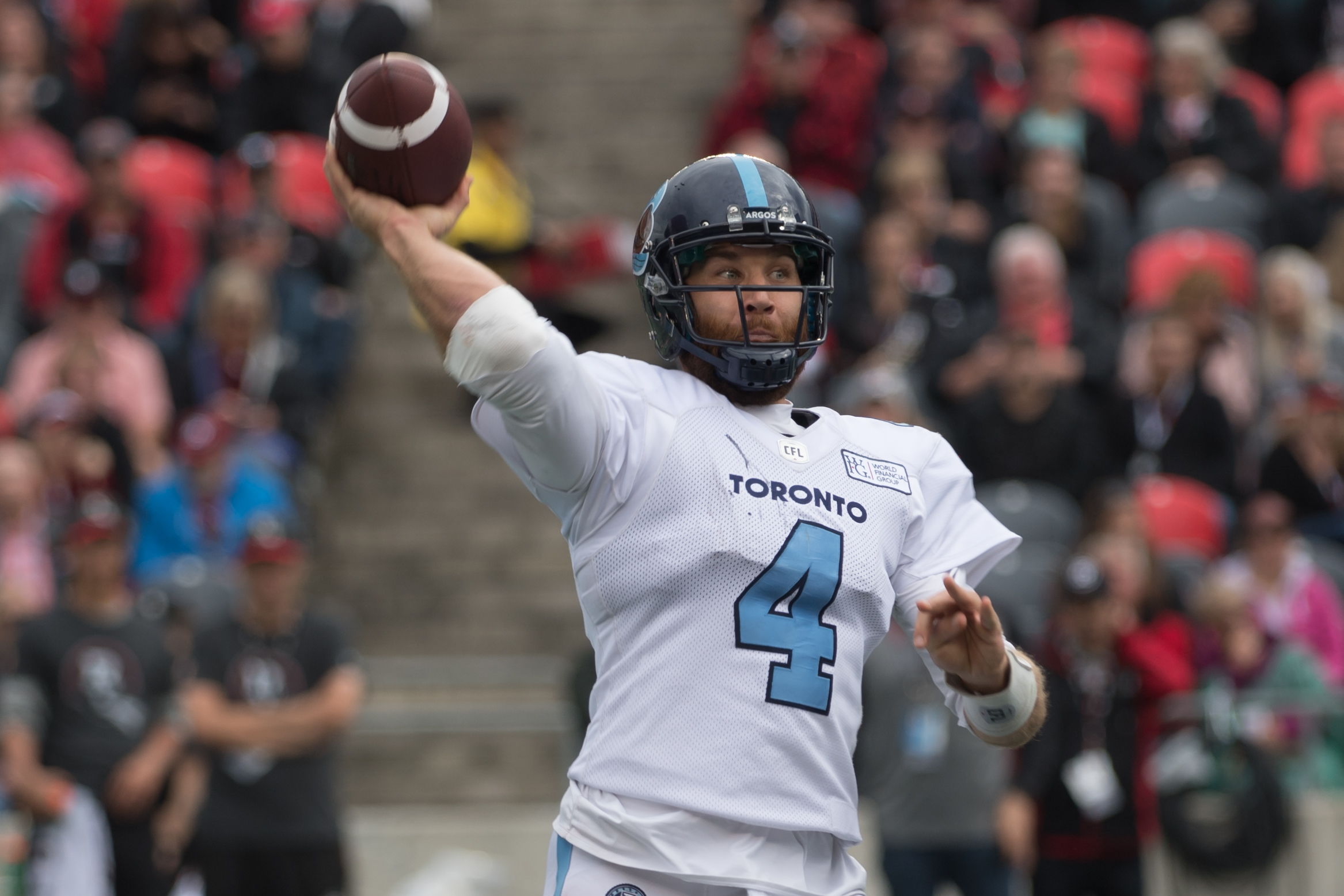 IG Field is the venue where and the Winnipeg Blue Bombers (1-0) will play the Toronto Argonauts (1-0) on Friday. Winnipeg opens this matchup as 10-point favorites. The O/U has been set at 45.5. The QB's who are expected to start are McLeod Bethel-Thompson and Zach Collaros.

The last time they took the field the Argonauts played the Stampeders and notched a win by a score of 23-20. McLeod Bethel-Thompson went 26/37 with 354 yards through the air and added 2 TD's. He finished the game without throwing an interception. John White led the team on the ground for the game. He broke a long run for 6 yards but he never crossed the endzone by way of the rush. He racked up a total of 28 yards via 9 carries which meant he averaged 3.1 yards per run. Ricky Collins was the receiving yardage leader by racking up 126 yards on 6 catches. He earned an average of 21.0 yards per catch for the game.

In terms of putting points on the board, the Toronto Argonauts averaged 20.7 PPG. As a unit they averaged 73.6 yards in the run game, which was 8th in the league. The Argonauts attained 1,324 yards in total last season. Toronto earned 33 touchdowns through the air and 5 rushing touchdowns.

When it comes to passing yards, the Argonauts allowed 5,329 yards which had them ranked 7th in the CFL. They allowed an average of 5.4 yards per rush and 118.6 rushing yards per game for the previous season. They gave up 36 touchdowns via the pass and 22 touchdowns via the ground game. Overall, they gave up 2,135 yards via the ground game in 18 games. They allowed 414.7 yards per contest ranking them 8th in the league. The Argonauts ranked 8th in the CFL concerning team defense, conceding 31.2 PPG.

The last time they took the field the Blue Bombers faced the Tiger-Cats and notched a win by a score of 19-6. Brady Oliveira paced the team on the ground for that game. His longest run of the day went for 15 yards but he wasn't able to run one in for a touchdown. He ran for a total of 126 yards on 22 carries which had him averaging 5.7 yards per tote. Nic Demski was the receiving yardage leader by racking up 70 yards on 5 receptions. He earned an average of 14.0 yards per reception for that game. Zach Collaros went 18/28 with 217 yards through the air and completed 2 TD's. He finished the game without throwing an interception.

When it comes to their ability to score points, the Blue Bombers earned a ranking of 2nd in the CFL with 28.2 PPG. Throughout last year, the Blue Bombers had a total of 3,619 passing yards as well as an average of 201.1 passing yards per game, which ranked 9th in the league. They held an average of 147.9 yards via the ground game and rushed for 2,663 yards for last season. The Winnipeg Blue Bombers averaged 349.0 yards per contest which was good for 6th in the CFL.

The Blue Bombers conceded 22.7 PPG, which had them sitting 5th in the CFL. Over the course of the season, they gave up 409 total points. Winnipeg allowed the opposition a total of 1,156 rushing yards (64.2 yards per outing) as well as 9 touchdowns on the ground throughout last season. They allowed the opposition 27 touchdowns through the air and 282.1 yards/game, which had them ranked 6th in the CFL.