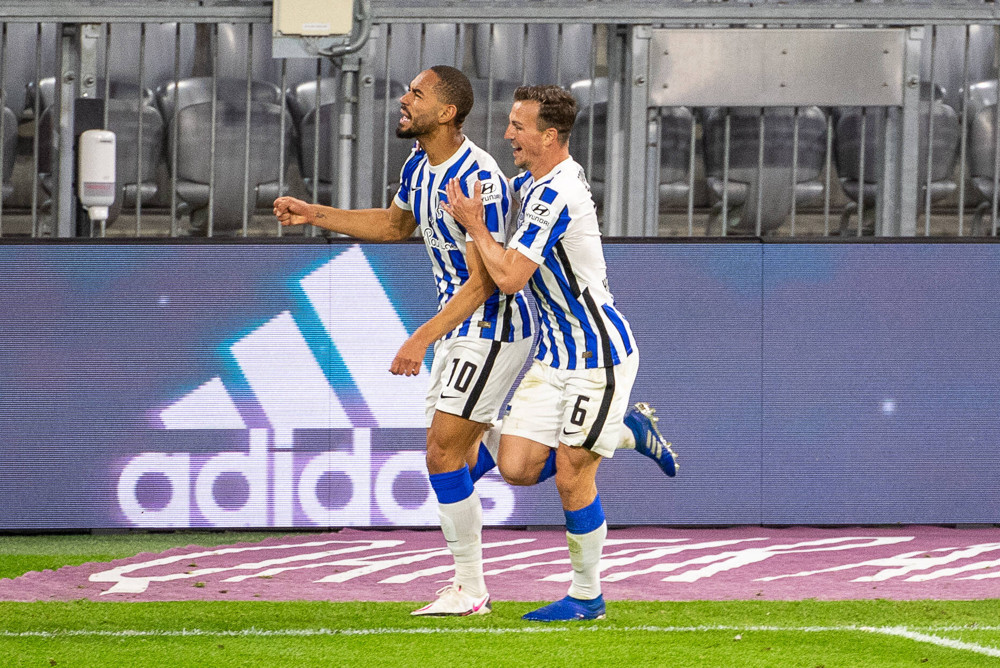 Dodi Lukebakio and Hertha BSC (8-11-15, 14th in Bundesliga) head to RheinEnergieSTADION on Sunday where they'll take on 1. FC Koln (8-9-17, 16th in Bundesliga). The goalkeepers protecting the net will be Timo Horn for 1. FC Koln and Alexander Schwolow for Hertha BSC. Hertha BSC are at at +228 while the Billy Goats are at +133. The O/U opens at 2.5.

1. FC Koln faced off with FC Schalke 04 in their most recent match and earned the victory with a final of 1-0. 1. FC Koln attempted 17 dribbles in this match and converted 9 of the attempts for a rate of 52.9%. In sharing the ball, they earned a 79.8% rate by completing 427 out of their 535 passing targets in their last outing.

In relation to shooting accuracy, 1. FC Koln wrapped this game up at a 52.4% rate by landing 11 shots on target out of 21 total shots. 1. FC Koln averages 0.97 goals per 90 minutes (33 goals in total) and have accumulated 23 assists in all contests this year.

Ondrej Duda is a guy who should be able to impact this match for 1. FC Koln. Duda has started 134 contests during his soccer career while scoring 0.23 goals per 90 minutes. The midfielder representing Slovakia has totaled 29 goals in 11,458 minutes played. He has accounted for 24 assists while accumulating 36 yellow card cautions so far in his pro soccer career.

Another player who could decide the outcome is Ellyes Skhiri, the midfielder representing France. Skhiri has played 15,782 mins during 180 starts and has been given a total of 26 yellow card cautions. He has assisted on a goal 9 times so far in his career while he has scored 16 goals. He scores 0.09 G/90 for his pro soccer career.

The last time they took the field, Hertha BSC went home defeated by a final of 2-1 against 1899 Hoffenheim. They wrapped up this match by connecting on 372 of the 451 passes they attempted earning a rate of 82.5%. Hertha BSC earned a 55.0% successful dribble rate by completing 11 of the 20 dribbles they tried. Hertha BSC landed 5 shots on target out of 9 shots attempted earning them a 55.6% clip in their last game. With 40 goals and 29 assists in all their contests, Hertha BSC sports an average of 1.18 goals and 0.85 assists per 90 minutes.

Dodi Lukebakio will need to provide a lift for Hertha BSC. He has an average of 0.30 goals per 90 mins and has been a starter in 85 games in his career. The forward from Belgium has 7,736 professional minutes and he has scored 26 goals. He has accumulated 17 yellow card warnings in his pro soccer career and has helped on a goal 19 times. Make sure to watch out for Matheus Cunha, the forward who is from Brazil. He has totaled 15 goals in his career while helping a teammate on a goal 5 different times. Cunha has been given a total of 13 yellow cards in 4,025 minutes played (45 starts). His goals per 90 minute average during his soccer career is 0.34.

Alexander Schwolow will look after the goal for Hertha BSC. Schwolow has totaled 58 shutouts while defending 993 shots attempted against him in 19,757 minutes in his career. He holds a save % of 69.8 and his clean sheet rate sits at 26.2%. He has allowed 1.48 goals per 90 while holding a record of 86-59-75. In his career, Schwolow has conceded 324 goals while totaling 690 stops in 221 starting assignments.