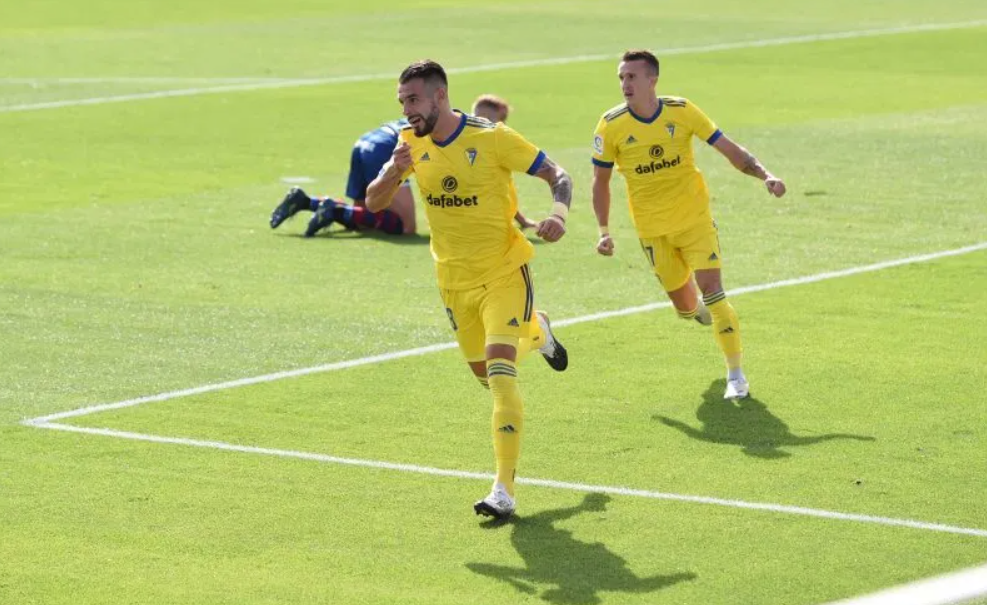 Roger Marti and Levante (9-14-15, 14th in La Liga) are headed to Estadio Ramón de Carranza on Saturday where they'll meet Cadiz (11-11-16, 12th in La Liga). The goalies who are expected to start are Jeremias Conan Ledesma for Cadiz and Aitor Fernandez for Levante. The moneyline on this contest has Cadiz priced at +182 and the Frogs are at +161. The O/U is set at 2.5.

Cadiz played Levante in their last matchup and earned a one point draw by a score of 2-2. Cadiz tried 15 dribbles in this matchup and successfully completed 10 of the attempts for a rate of 66.7%. In the passing game, they finished this match with a 70.7% passes received percentage by completing 183 of the 259 pass targets in their last outing.

In regard to shooting accuracy, Cadiz wrapped this game up at a 33.3% rate by hitting 2 shots on target of 6 total shots. Cadiz averages 0.87 goals per 90 minutes (33 total goals) and have earned 16 assists in all matches for the year.

Alvaro Negredo is a player who should be able to impact this match for Cadiz. Negredo has started 368 matches in his career while scoring 0.48 goals per 90 minutes. The forward hailing from Spain has accumulated 168 goals in 31,546 minutes. He has totaled 50 assists while earning 50 yellow cards in his career.

Another player who could decide the outcome is Choco Lozano, the forward representing Honduras. He has assisted a teammate on a goal 10 times in his pro soccer career while he has scored 39 total goals. Lozano has been on the pitch for 11,602 mins in 131 career starting assignments and has been handed a total of 38 yellow cards. He averages 0.30 goals per 90 for his pro soccer career.

The man who will defend the goal for Cadiz will be Jeremias Conan Ledesma. Ledesma has defended the goal for a total of 8,910 minutes and is sitting with 288 stops thus far in his career. His goals against per 90 mins is 1.3 (124 goals given up) and his save % is 71.8%. The keeper hailing from Argentina has had 404 shots sent in his direction in 99 starts. Ledesma (33-32-34 record in his career) has recorded 29 shutouts, which has him sitting with a 29.3% clean sheet percentage.

In their last outing, Levante went home with a draw by a final score of 2-2 against Cadiz. Levante finished with a 40.6% successful dribble percentage by converting 13 out of the 32 dribbles they pursued. They wrapped up this match by completing 534 of the 595 attempted passes earning a percentage of 89.7%. Levante had 4 shots attempted out of the team's 17 shots attempted which had them at a 23.5% rate when they last took the field. Having earned a total of 45 goals and 35 assists in all their matches, Levante is averaging 1.18 goals and 0.92 assists per 90 minutes.

Roger Marti should be able to be counted on for Levante. The forward from Spain has accumulated 16,846 minutes while he has scored 88 goals. He has accumulated 48 yellow card warnings so far in his career and has helped a teammate on a goal 15 times. He currently averages 0.47 goals per 90 and has been given a starting assignment in 192 contests in his pro soccer career. You should also watch out for Jose Luis Morales, the forward hailing from Spain. Morales has been handed a total of 33 yellow card cautions in 22,386 professional minutes played (263 starts). His G/90 average in his pro soccer career is 0.22. He has earned 55 goals in his career while assisting on a goal 35 times.

Aitor Fernandez will reside in front of the net for Levante. So far in his pro soccer career, Fernandez has conceded 187 goals and has racked up 449 saves in 150 starting assignments. He has conceded 1.24 goals per 90 minutes and he has earned a mark of 50-47-53. He has earned a save % of 73.1 and his clean sheet rate sits at 25.3%. Fernandez has accumulated 38 clean sheets while defending 624 shots tried against him in 13,525 minutes throughout his career.