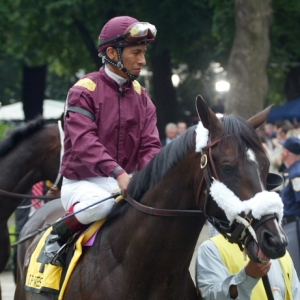 The last 10-horse field in the Belmont Stakes was 20 years ago when Easy Goer lived up to his name, thwarting Sunday Silence's bid to become the 12th Triple Crown champ by eight lengths.

There's no such title for a horse at stake, but there is a more historic prize on the table for a person. If Mine That Bird repeated his victory in the Kentucky Derby, Calvin Borel becomes the first jockey to win the Triple Crown on different horses having rode Rachel Alexandra in the Preakness.

Of the other nine three-year-olds entered in the 141st Belmont, six appear to be Pretenders:

Brave Victory: The son of Lion Heart` is 1-2-1 of four at Belmont, but both wins were in maiden and allowance sprints.

Chocolate Candy: The son of Candy Ride won four of nine on California synthetic surfaces, but finished fifth in the Kentucky Derby, more 13 lengths behind at the wire. Garret Gomez rides again - he guided him to victory in last fall's Real Quiet Stakes at Hollywood. Real Quiet was deprived of the Triple Crown by Victory Gallop's nose in '98.

Flying Private: He ran a fabulous fourth in the Preakness, but has only a maiden victory at six furlongs back in August in a dozen outings.

Luv Gov: One maiden score in 11 outings does not a contender make.

Mr. Hot Stuff: His 1-for-7 showing on synthetic surfaces accurately indicated the 15th place finish in the Derby. Two-time Belmont winning jockey Edgar Prado can only do so much.

Summer Bird: The son of 2004 Belmont winner Birdstone has a lone maiden triumph in four races. He did run sixth in the Derby, but was beaten more than 13 lengths.

Miner's Escape: One of two Nick Zito trainees, 15-1 in the morning line, has steadily improved during the year. The son of Mineshaft posted two straight victories on dirt, breaking his maiden at Gulfstream Park and capturing the Federico Tesio by 4 ½ lengths, both at 1 1/8 miles.

He runs close to the pace and his granddad A. P. Indy scored in '92 after missing the first two legs of the Triple Crown. Zito has saddled two longshot winners during the past five races: Da' Tara last year and Birdstone in '04. The price merits a win wager.

Dunkirk: The buzz horse for the Kentucky Derby had the worst trip of the 19 runners right from the break -- stumbling, being bumped and steadied before the first turn. His granddad also is A.P. Indy while '90 Derby victor Unbridled is the dam sire.

Todd Pletcher won in '07 with Rags to Riches, guided by his new rider John Velazquez. The early 4-1 second choice has two wins in four outings stalking the pace. The rested colt has the highest speed figure of the field, recorded when he ran second in the Florida Derby.

Mine That Bird: Eleven Derby winners that lost the Preakness since '23 captured the Belmont. Borel loves his chances so much he has guaranteed victory.

However, this son of Birdstone was more than six lengths from the lead after a mile in the first two legs of the Triple Crown, losing the Preakness by a length. If the early 2-1 favorite is closer to the pace turning for home, he should win. Can he post his third straight triple-digit speed figure? We shall see.

Charitable Man: The son of '99 Belmont winner Lemon Drop Kid has several things going for him besides breaking from the same post as his dad - No. 6. He had the lead in the stretch for three of four wins on dirt, including two scores at Belmont. His connections have been successful recently: Alan Garcia rode Rag to Riches two years ago and Kiaran McLaughlin trained '06 champ Jazil.

The 4-1 second choice has good tactical speed while his running style fits the winning scenario -- stalking before kicking in down the lane. His 3 ¾-length score in the Peter Pan was excellent. And that race has produced at least one Belmont champ each decade since '44 when Bounding scored.

In case you believe in names, horses beginning with "C" have visited the winner's circle the most - 20 times. Make that 21.