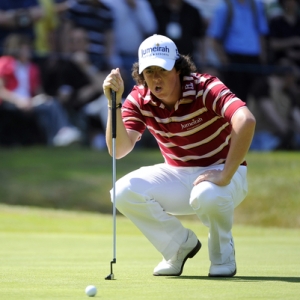 If a prop bet could ever be tailor made for a specific event it would the Big Four vs. The Field bet available at a number of sportsbooks, including Bodog, for this weekend's British Open. Bettors who take the Big Four are betting on Tiger Woods, Sergio Garcia, Rory McIlroy or Lee Westwood to bring home the Claret Jug. The odds for the Big Four have been set at +175 while the field is at -250.

As the longest running major the British Open has had its share of upsets since its introduction in 1860. But this year the Open heads to Turnberry, Scotland. In the Open's three previous stops at the challenging Ailsa course, the best players on the PGA Tour have come to play.

The four golfers in the Big Four prop bet are clearly the best the Tour has to offer. Tiger Woods is a three-time British Open champion and hands down the best golfer in the world. Sergio Garcia is one of the best ball strikers in the world and he is always a threat, especially on European soil. After Woods at 2/1 and Garcia at 20/1, McIlroy is the next favorite at 22/1 and then Lee Westwood has been instilled at 28/1.

The last three Opens at Turnberry have produced winners that surprised nobody. In 1977 Tom Watson and Jack Nicklaus dueled under the sun with Watson winning by one stroke. In 1986 it was Greg Norman's legendary second-round 63 that propelled him to the Claret Jug and 15 years ago Nick Price began a string of major victories with the 1994 British Open Championship.

In addiction to the course's reputation for domination by the favorites, the weather is also expected to be a challenge for golfers when the tournament tees off Thursday. Tiger, Sergio, Rory and Lee have proven to be capable golfers even in the worst of weather conditions.

Of course, there could be a fly in the ointment for backers of the Big Four. That fly would be Padraig Harrington, the two-time defending champion from Ireland. He ended Woods' back-to-back streak in 2007 at Carnoustie and then defended his title in a Tiger Woods-less field last year at Royal Birkdale. Every tournament is different when Tiger Woods' name is not on the opening day tee times but the last two years are a prime example. When Woods won his Claret Jugs in 2000, 2005 and 2006 he finished with a score of -19, -14 and -18, respectively. When Harrington won his back-to-back titles the last two years his winning scores were -7 and +3.

The line of +175 is not the largest value around, especially when considering the field contains golfers that have earned their way to Turnberry. However, the history of the Open at Turnberry points to the Big Four as the smart play.