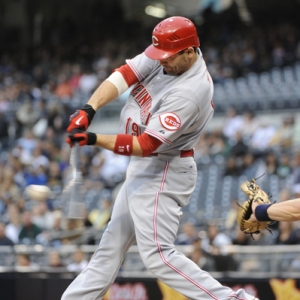 Whether it's a sleeper team off to a hot start or an alleged contender playing lackluster ball through this 2009 Major League season you can hear those words vibrating through clubhouses and corridors across the MLB landscape. And for the Cincinnati Reds the youth of this season is both a blessing and a curse.

Heading into Wednesday's action the Reds are a solid 26-20 and just 1.5 games back of St. Louis and Milwaukee for first place in the wide-open National League Central. The Reds have been one of the most profitable teams in baseball this year and have won five of their last seven series of three games or more.

The Reds have an off day today and then will be sent through a critical 10 games in 10 days gauntlet that could be a turning point for Cincinnati's season. The Reds head out for a seven-game road trop that takes them to Milwaukee for three over this weekend and then to St. Louis for four games to start next week. They then wrap up with a three-game weekend home stand with the Chicago Cubs.

The Reds should be strong underdogs throughout that 10-game stretch against their more "high profile" opponents. However, they have been solid against the top dogs in the Central over the past three seasons. Cincinnati is 25-27 against the Cubs over the last three years, 26-24 versus the Brewers, and 20-25 against the Cardinals. That's just five games under .500 against those three foes.

Further, the Reds are already 7-4 against those three teams this year and have won all three of their three-game series against these division rivals this year. But for that reason the Reds shouldn't sneak up on anyone over the next two weeks.

Cincinnati has been a very good road team so far this season and their 13-8 winning percentage away from the Queen City is second best in the league to Philadelphia's 16-6 mark.

One major problem that Cincinnati is facing heading into this key stretch is the health of some of their key pieces. Ace righty Edinson Volquez is on the disabled list at least until June 1 with back spasms. Joey Votto has been exceptional when he's in the lineup, but the young star has been dealing with what has been described as "dizziness" over the last few weeks and as been in and out. Finally, team leader Brandon Phillips has a fractured thumb. Phillips has sat out the last few games but is going to try to play through the pain and swelling.

But none of this has stopped Cincinnati so far. They have won four straight games heading into their day off today. They are getting exceptional contributions from all of their role players and veteran guys have been coming out of the woodwork to give them quality at-bats and innings. Journeymen like Ramon Hernandez, Jerry Hairston, Willy Taveras and Alex Gonzalez have all been getting the job done and helping lead this young team in the right direction.

Also, Dusty Baker needs to be commended for his work. Baker has been shuffling his lineup daily and helping to prop up this inexperienced team. And after pretty much putting it on auto pilot since coming over from San Francisco I feel like Baker is starting to earn his paycheck and reputation.

We're going to find out quite a bit about the Reds over this next two weeks. If they can be competitive and mange anywhere around a 5-5 mark or better through this stretch then I think that they will have proven that they are going to be in the thick of the Central race all summer. But if they fall on their faces and get worked over by the top tier of the division then I think that it could have a long-lasting impact and leave fans and backers of this team pining for the month of May.