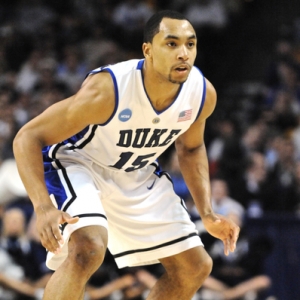 Last night's draft will be hashed and rehashed for the next few months before the NBA season. But in my eyes there are already some pretty clear winners and losers from the entire Draft Season.

No single offseason event impacts the college basketball season like the NBA Draft. With the annual Is-He-or-Isn't-He and Should-He-or-Shouldn't-He debates and decisions raging on campuses everywhere, the NBA early entry list is like a roll call for college programs headed for heaven or for hell.

This year's early entry and draft process left what I felt was a significant number of winners. It appears that the rule changes to prevent prep-to-pro jumps have made a lot of people much more realistic about their draft prospects and the results are more educated decisions from the players. And while forcing superstar high schoolers into college clearly benefits the powerhouse programs, those schools must also deal with the uncertainty and the constant high rate of turnover that occurs each summer.

Looking over the names that Are and Aren't I've found several mid-level clubs that could be poised for strong seasons not only because of what they didn't lose but what other competitors in their conferences did.

I would have to say that there weren't a ton of losers in the early entry process because there really weren't many surprises. It was common knowledge that guys like Chase Budinger and Jordan Hill were leaving. And while players like Gerald Henderson, DeJuan Blair, Jodie Meeks, Jonny Flynn and Patty Mills might have raised some eyebrows (and broken some hearts) with their decisions it's not as if any of them were stunners.

Instead, the losers section focuses more on teams that were wiped out by early entries. And many of those clubs have been embroiled in controversies ranging from forcing players out early to significant recruiting violations. These teams in turmoil will have to combat the negative momentum as they head into the season.

Here are my NBA Draft winners and losers in terms of the college teams that are most impacted by Thursday's action:

South Carolina - The Gamecocks were a talented but streaky team in Darrin Horn's first year at the helm. And staring at the prospect of losing electric point guard Devan Downey and their top big man in Dominique Archie the Cocks were on the verge of being thrown back into the rebuilding heap. Instead, both players return for their senior years and USC has to be considered one of the favorites in the SEC this year.

Wofford - There were a lot of better individual players than Wofford's Junior Salters that decided to return (Luke Harangody and Greivis Vasquez are two names that jump to mind). But Junior Salters' return, coupled with Steph Curry's decision to leave early, may have vaulted the Terriers from middle-of-the-pack SoCon team to the conference favorites.

Georgia Tech - This program has been somewhat on the ropes and Paul Hewitt - one of the best in the business - was starting to hear the grumblings get louder. Had Gani Lawal bailed for the pros then the Jackets likely would be headed for another mediocre season. But his return, and defections throughout the rest of the ACC, is a major coup for Hewitt and gives him a great young nucleus to coach next season.

Louisiana Tech - "Who the hell is Louisiana Tech?" I'm sure that's what you're thinking. But Tech is a team that I followed very closely last year and is a squad that went 19-7 ATS. They were trying to mesh a slew of transfers with some established guys and the chemistry wasn't there. They nearly lost a pair of All-WAC performers in Kyle Gibson and Magnum Rolle. Instead, the pair of seniors will come into this year with a lot of confidence and a lot of talent and make this team competitive in league play again.

Mississippi State - Again, James Varnado may not be the most talented individual to come back to the SEC (Tyler Smith and Tasmin Mitchell are better). But the 6-10 center is absolutely critical to what the Bulldogs do. Couple that with other SEC defections and State should be a national player on the scene in 2009-10.

USC - This team has been absolutely gutted by the loss of three starters from last year's team. Tim Floyd had quietly positioned USC back at a level of prominence - but then watched the program blow up while he resigned this summer. The Trojans are right back to square one. And unlike their older, better brother, UCLA, this program doesn't have the stability to weather the storm.

Syracuse - If Jonny Flynn, Eric Devendorf, and Paul Harris were to have returned to The Dome next year the Orange would absolutely have to be a Top 3 team and, considering they beat consensus No. 1 Kansas last year in Kansas City I could make a strong case for the Orange heading into the season as the top dog. But to no avail. Flynn left, and Devendorf and Harris unceremoniously leave two of the most roller coaster careers in 'Cuse history behind them. Oh, and I get to miss out on the best Syracuse team in nearly 25 years. Awesome.

Wake Forest - Just when it seems like Wake Forest has the talent to topple the North Carolinas and the Dukes in the ACC the NBA Draft lurks in during the night and slams an anvil over the Deacons' dreamy heads. Jeff Teague - a player they desperately needed back next season - and James Johnson both bolted for the dollars, leaving Wake to wonder what went wrong.

Memphis - Just like USC, the Tigers lost their head coach and their two best players all before the lottery has even begun. Tyreke Evans and Shawn Taggert would have likely been enough for Memphis to roll through sorry ass Conference USA. Instead it looks like Memphis will be getting a taste of its own medicine this winter and will be on the wrong side of some serious beatings.

Florida - There were other more talented individuals that bailed on their teams for a shot at the draft. But few were under as odd of circumstances as Nick Calathes. The SEC's best player over the last two years snubbed UF and signed with a Greek club team. Really? The honeymoon is clearly over in Gainesville and cracks in the program are showing once again.