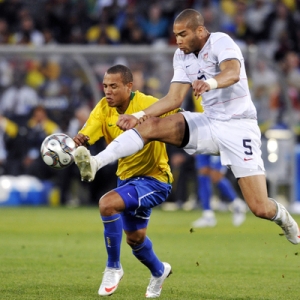 The Confederations Cup - a dress rehearsal for next year's World Cup - has been ongoing in South Africa for the last couple of weeks. Eight teams started - the winners of the last regional tournament in each of the world's six regions, the defending World Cup champ Italians, and the host South Africans. Now just four remain. Spain will play the Americans on Wednesday after the U.S. made it to the second round with some impossibly good luck. Thursday will see Brazil play South Africa in the other semifinal. Both matches feature heavy favorites and very likely outcomes. The winners - almost certainly Spain and Brazil - will meet in the finals on Sunday, and the losers will play for third place on the same day. Here's a look at how the rest of the tournament should play out (odds are from Bodog):

Spain (-450) vs. U.S. (+1000) - The American team, to its credit, seems to think that it can beat Spain. Unfortunately, the odds would suggest that no one agrees. Spain is the co-favorite along with Brazil to win the World Cup at odds of 5/1. The struggling Americans garner far less optimism at 50/1. Spain unquestionably had the easiest draw in the Confederations Cup - South Africa, New Zealand, and Iraq - but it certainly made the most of that opportunity. It won its first three matches by a combined score of 8-0, and never spent even a second looking in less than total control. The team is reasonably healthy and wildly talented, and are justified in its position as heavy favorites.

The Americans are very lucky to be alive. After faltering badly against Italy and Brazil they needed a miracle to make the second round - they needed to beat Egypt by at least three goals and needed Italy to lose by three or more to Brazil. Both happened against very long odds. The team is healthy, but they haven't played well against top competition for a long time - years, even. They also face a serious matchup issue here - the Spaniards have a brilliant midfield and an incredible striker in Fernando Torres, and the Americans don't particularly have a great answer for either of them. If the Americans are going to win they'll have to absolutely play perfectly, and they'll have to hope that Spain has a very bad day. I'm not betting on either.

Brazil (-450) vs. South Africa (+1000) - The South Africans will get a huge boost from playing in front of a rabid home crowd. Unfortunately, they have to play the best team in the world. Brazil opened up with a bit of a scare. It got way more of a challenge from Egypt than it expected, winning just 4-3. The Brazilians rebounded well and found their focus, beating the U.S. and Italy by identical 3-0 scores. Not surprisingly, the Brazilian attack has been led by Kaka, the 2007 World Player of the Year. He has scored twice, and has seemed to be right in the middle of things in every Brazilian charge. He keys a ridiculously deep team that doesn't really have a weakness on paper. They don't always play their best against weak opponents, but that shouldn't be an issue here because of the boost that winning this tournament would be to their World Cup preparations.

South Africa will have to milk every advantage out of playing in front of their home crowd because they have some real problems in this matchup. The first is the most important - scoring. Brazil has netted 10 goals in the tournament. South Africa scored just two, and they both came against the very weak New Zealand squad. They just don't have the firepower to even remotely contend here, barring a miracle. They play fairly sound defense, but they were no match for Spain, and Brazil is at least as explosive. You can never predict for sure what can happen in front of a partisan crowd with a hungry team, but winning here is a massive task for a team that is probably an underlay at 80/1 to win the World Cup.

The finals - I'm not going out on much of a limb to suggest that Brazil and Spain will meet in the finals. What happens once they get there is a bigger question, and one I won't weigh in on. What I do know, though, is that this is a very important game. It gives bettors a chance to see how the two favorites stack up at this stage in their preparations, and it will give the teams the best sense they have had yet in their preparation cycle of how ready they are and what they have to work on before next year. There's also a decent chance that the outcome of this game will have an impact on the future odds for the World Cup, so that will definitely be worth watching.