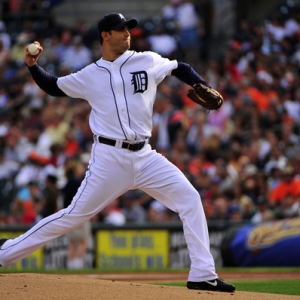 As recently as mid-June, it appeared the Detroit Tigers were the class of the American League Central. However, recently, the Tigers' struggles have let the Minnesota Twins and Chicago White Sox back in the race.

There are good signs and bad signs when it comes to Detroit's futures chances. Since I'm a glass half-full kind of guy, let's start with the good: pitcher Armando Galarraga.

After 10 consecutive starts with either a no decision or a loss, in which Galarraga's ERA was 7.48 and he had more walks that strikeouts, the right-hander has started to put it together with a 2.79 ERA and a strikeout-to-walk ratio of 17:8 in his past three starts (two wins). Galarraga, who won 13 games last year, is the only Tigers starting pitcher with a victory (entering Tuesday) since June 21.

Galarraga's resurgence is huge for a team that has lost its past three series since sweeping the Cubs at Comerica Park. Other than Justin Verlander and Edwin Jackson, there is not much experience in the rotation, and that leads me to one of the bad signs: the struggles of Rick Porcello.

The early leading candidate for AL Rookie of the Year, Porcello (8-6, 4.14 ERA) isn't going to pitch again until after the All-Star break. Now the Tigers say it's just to keep Porcello fresh, and he will have had about 10 days off between starts and will head into the second half with 87 innings pitched.

"We always said all along we were going to pick our spots to protect (him). It was pretty much the plan for a while to take that opportunity. You just have to be careful with it," manager Jim Leyland said to reporters.

But his recent struggles have to be a bit worrisome, since it's not every day a 20-year-old pitcher can succeed as long as he did unless his name is Dwight Gooden. Porcello, who did become the first pitcher 20 or younger since Gooden in 1985 to win five straight starts earlier this season, has allowed nine earned runs in his last two outings after allowing eight earned runs in his previous four starts.

Plus, the rookie lost his composure a bit in Sunday's loss to the Twins - a Justin Morneau homer was part of a run of eight straight Minnesota runners reaching base on Porcello. He allowed six runs and seven hits in four innings, and his body language in that rough inning showed his age.

The Tigers' magic number is definitely four runs: They are 35-10 entering Tuesday when they score four or more and just 9-28 when they score three or less (no playoff team should have 37 games at this point in the season with three runs or less). That doesn't leave much wiggle room for the pitching staff.

Both Curtis Granderson and Placido Polanco are slumping in a big way in that Detroit lineup right now. But there might be some hitting help on the horizon as Carlos Guillen took batting practice prior to Monday's loss to the Royals. It was his first time taking BP since he was put on the disabled list in May with a shoulder problem, and he felt no pain on Monday. Guillen is targeting an end of July return, which just so happens to coincide with the trade deadline.

As currently constructed, the Tigers seem rather like a house of cards that is standing precariously. They need another hitter and another starting pitcher, but can they afford to add the necessary salary?