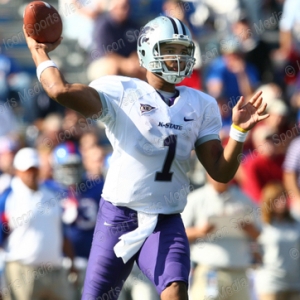 What is the main type of player that is going to come out of the first round of this year's NFL draft? Unless this year is totally and utterly different than most years then the answer is simple - a bust. Picking top talent is a very imprecise business, and it's no easy matter to go from a college career where you are the king of the world, to the pros where you are just another incredibly talented guy. Unfortunately, it's not always easy to spot the duds - remember, a lot of people thought that Ryan Leaf was a better choice than Peyton Manning. Despite the challenge of picking out the wasted picks, I'm fearlessly willing to give it a try. Here are four players that I am not particularly optimistic about and that I think could wind up as first-round busts later this month.

Matthew Stafford, QB, Georgia - This one is mostly just a case of history. It seems at least as likely that a first-round quarterback isn't going to end up turning into anything as it is that he turns into a serviceable pro, never mind a star. Thirty-one quarterbacks have been chosen in the first round since 1997. Using a fairly conservative definition, 12 of those players have been busts, and seven more are just bouncing around looking for a good fit for their next chance. Only five players have done a good job of turning around the team they were drafted for and have still managed to stay with that original team. In short, the odds are stacked against Stafford. On top of that, I just don't get a positive vibe about Stafford. He had a stacked Georgia team this year that came into the season at the top of the polls, but he led them to comparative mediocrity. His numbers were fine, but they weren't outstanding, and you get the real impression that he's only the top QB in this class because it's not much of a class. When I close my eyes and picture Stafford, I see more Cade McNown than Peyton Manning, more Akili Smith than Matt Ryan.

Percy Harvin, WR, Florida - Outside perhaps of Michael Crabtree, Harvin is the most electric, explosive, game-changing player in the draft. That being said, I wouldn't touch him with a 10-foot pole. There are a couple of reasons for that. First, I think that it's pretty clear that Harvin's biggest fan is himself. It's okay for players, and especially receivers, to be cocky, but there is more to it than that with Harvin. He seems to be under the impression that a good deal of Florida's success was due to him, and that he is destined to be a star. That's not a good attitude to enter the league with. There is also the mater of his size. He's not built big and strong, and he isn't exactly the most durable player in the world. In the pros teams will know that and they will hunt him. He could have a good year or two, but sooner rather than later things will catch up to him and he will break down. I just don't see the upside given the cost of landing him for your team and paying him once he is there.

Josh Freeman, QB, Kansas State - A lot of my issues with Freeman are the same as they were with Stafford. It goes deeper, though. Freeman is one of those quarterbacks that has done his best work off the field. His career numbers aren't great, and he played for consistently lousy teams, but his size and workout numbers have sent him rocketing up the charts. I'm not convinced that players that have had a significant chance to play in college and haven't shined can significantly improve in the pros. It's not like he was toiling against ruthless SEC defenses, either. The Big 12 doesn't even play defense most weekends, yet Freeman rarely stood out as anything more than an ordinary player during the season. I would understand a team taking a risk on him, but only if it happened early on Sunday, not early on Saturday. The chances of him becoming a bona fide star seem quite low, and that's not what you are looking for in a first rounder.

Andre Smith, OT, Alabama - I can't pretend to understand how NFL personnel departments work, and this is another situation that just mystifies me. Smith's struggles are well known - he got suspended for his team's bowl game, he left the Combine in the middle of the night without letting anyone know, and he had a lousy pro day. Those are all good reasons for the alarm bells to ring. Smith was in freefall after the Combine, but now it appears as if he is back into the Top 10. On some boards I have even seen him as the second tackle taken. Smith's physical skills and his college play are undoubtedly impressive, and if he delivered at that level then he would be a star. It just seems unlikely given his actions, though, that he will give the effort, discipline and dedication required to play at the highest level. Maybe he'll work out, but if he were to crash and burn could anyone really and truly be even a little bit surprised?