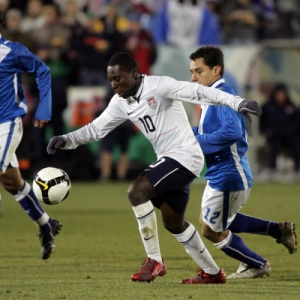 It seems like we just got through one major international soccer tournament, and already we are on to the next one. Granted, the Gold Cup is virtually meaningless in comparison to the Confederations Cup that just ended in South Africa. Still, this much exposure to major international soccer is all very good preparation for the sensory overload that we will face less than a year from now when the World Cup starts in South Africa.

The Gold Cup started in 1991 and is held about every two years. It is the championship of CONCACAF, the federation of teams in North and Central America and the Caribbean - think of it as our much less impressive version of the Euro championship. There are 40 countries that are eligible to compete in the tournament, though only 12 qualify for each event. In the nine editions of the Gold Cup, only three teams have won the title - the U.S. and Mexico have four titles each, and Canada shocked the world to win their first ever international title in 2000.

When the Gold Cup falls the year before the World Cup it can be an important indicator of the prospects of the teams trying to qualify. That might not be the case this year, though. The qualification process is down to six teams (Costa Rica and the U.S. are secure, Honduras, Mexico and El Salvador are fighting for the third guaranteed berth and the spot in the final qualifying tournament for the fourth place team, and Trinidad and Tobago is in trouble), and several of those teams seem to be determined to save themselves and put a second rate team on the field for the Gold Cup. That makes the tournament less interesting, but it also can provide value for lesser teams - they have a much better chance against B-teams than they would against top squads.

The tournament started on July 3, and the round robin section for the three groups of four teams goes until July 12. The top two teams in each group and the top two third place teams will progress to the knockout round which starts on July 18 and winds up on July 26 at Giants Stadium. In the search for value as the tournament progresses, here's a look at the biggest storylines and factors to consider:

The Americans - Under normal circumstances the Americans would be heavy favorites to win here. They are coming off a huge showing at the Confederations Cup and are obviously in top form. The problem, though, is that this is almost entirely a new squad - just four players from the South African tournament are on this squad. They are still probably the best team in the region and are likely to win, but they won't be nearly as dominant as they could be, and they could be overbet by casual bettors who aren't paying enough attention. They got some unfortunate good luck in their group as well - Honduras is the only real threat in the group, and they could be distracted by the political instability at home. One of the players with the most on the line here is Freddy Adu. He was in South Africa but didn't play. A huge performance here could go a long way to securing him a World Cup roster spot. He's off to a good start - he scored the team's first goal.

Mexico - The Mexicans should be the second best team in the region, but they have been struggling recently. In response to those struggles they are trying to get younger and faster - a logical response for a country that won the U-17 World Cup in 2005. That should pay off in the long run, but for now the road is bumpy. Almost half of the current roster has less than a year of international experience, and those that have more don't seem to be ready for prime time quite yet - they are in real danger of missing out on the World Cup. That being said, the team has an easy group, and should, if the tournament runs to form, wind up in the finals against the Americans.

Group of Death (sort of) - Group A doesn't have either of the big contenders, but it certainly has started out as the toughest group. Costa Rica has been brilliant in World Cup qualifying and are the class of the group. Jamaica is a talented squad that was a popular pick to finish in the top two in this group. There is just one problem - both of those two teams lost their first games. El Salvador, a team fighting for their World Cup life, beat Costa Rica on a late goal, and the Canadians beat Jamaica. Canada is an interesting Gold Cup story - they are a disastrous team, yet somehow they always seem to get up for this tournament. Any of these four teams could move on to the next round, and whichever ones do could be real thorns in the side of the top contenders.