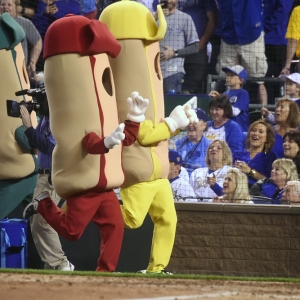 It wouldn't be the Fourth of July without a Nathan's Hot Dog Eating Contest and it wouldn't truly be competitive eating if there was not a way to bet on it. Bodog, among other sportsbooks, has you covered on the latter.

No surprise here, but defending champion Joey Chestnut is the favorite at 20/31 with Takeru Kobayashi, the hot dog eating legend Chestnut first stunned in 2007, listed at 21/20 odds. The only other competitive eater listed is Tim "Eater X" Janus at 23/2 with the field at 13/1.

Chestnut and Kobayashi are highly competitive and all eyes will be on them as the clock winds down. There is not a ton of value with Chesnut because of his odds but Kobayashi getting 21/20 odds would have seemed unfathomable two years ago. He still has the ability to beat Chesnut so these odds hold plenty of value as does those for Janus, who appears well ahead of pace of where he was last year.

Janus, who always wears a mask during eating competitions, finished in third with 42 hot dogs last year. In a qualifier for the Coney Island main event this year Janus surpassed his 42 hot dog performance last year with 50 hot dogs eaten at a qualifier in Connecticut.

The winning competitive eater is just one of a dozen different bets available. The winning number of hot dogs total has been set at 61 1/2. The only time the winning total has surpassed 60 was in 2007 with the old 12-minute time limit. However in the 10-minute format last year Chestnut and Kobayashi both ate 59 hot dogs in regulation and the winning total has risen continuously ever since Kobayashi burst onto the scene in 2001, obliterating the previous record of 25 ½ hot dogs with his 50 hot dog performance.

Even though 61 ½ has not ever been reached in the 10-minute regulation, contestants have continued to improve year in year out and the over looks like a safe bet.

Another bet where the over has good value is in the Total Hot Dogs Consumed by the Top 3 Eaters bet where the total has been set at 167 ½. Last year Chestnut, Kobayashi and Janus combined to eat 160 hot dogs. Expect to see improvement here too with Janus already besting his performance from last year in the qualifier and Chestnut and Kobayashi poised to stay ahead of pace.