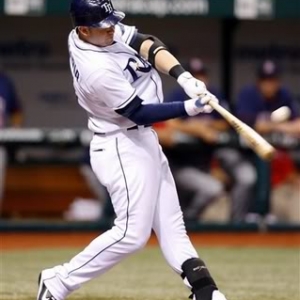 Oddsmakers at Bodog list the Tampa Bay Rays at 7/1 to win the American League East, which seems awfully generous considering how inconsistent the reigning division and AL champs have been.

For example, the Rays had gotten back over .500 last week thanks to a four-game winning streak capped by a victory over red-hot CC Sabathia in Yankee Stadium. However, the Rays then dropped the final two games to New York and the home series opener with the Los Angeles Angels on Tuesday night.

Entering Wednesday’s play, Tampa Bay is six games behind the Yankees and Red Sox in the division but closer to last-place Baltimore than third-place Toronto.

While pitching was the strength and hitting the question mark last year, it’s the exact opposite in 2009. The Rays are eighth in the AL in ERA but first in runs scored. And, boy, is the magic number four runs for this team; when Tampa Bay doesn’t score four runs it is 1-22.

Starter Scott Kazmir is on the disabled list and the closer spot has been a mess with Troy Percival hurt and possibly headed back for retirement. Right now the Rays are making do with Randy Choate and J.P. Howell at closer with Manager Joe Maddon not trusting Jason Isringhausen for some reason, despite a 2.84 ERA, to finish off games. In fact, Tampa Bay is so desperate it recently signed Jorge Julio off the scrap heap to a minor-league deal.

The next few weeks could really determine if it’s time to get off the Rays’ bandwagon as interleague play returns. The team is expecting shortstop Jason Bartlett of the disabled list possibly as soon as Friday, and he is hitting a club-leading .373 – which would lead the AL if he had enough plate appearances.

The schedule might set up nicely against the National League. Last year, the Rays went 12-6 in interleague play. They begin this weekend with three home games against the team with the worst record in baseball, the Washington Nationals. Then the Rays go to Colorado, which is playing much better of late but still well below .500. That is followed by three games at the Mets, who should still be missing the likes of Jose Reyes and Carlos Delgado.

Then Tampa Bay returns home for three against the Phillies (that will be tough) and three against Florida. The Rays have won six of seven against their in-state neighbors since last season.

There is reason to be optimistic the Rays can thrive through that stretch. Rookie starters Jeff Niemann (2.03 ERA in his past five starts entering Wednesday) and David Price (2.45 ERA) have been excellent; B.J. Upton continues to rebuild his batting average from a horrid start - he’s hitting .296 with a homer and six RBIs in June after entering the month at .204 with two homers and nine RBIs - and Evan Longoria might be the most feared hitter in the American League right now.

It all comes down to whether starter Andy Sonnanstine can return to his 2008 pitching form or whether Kazmir can return and take his place. And the bullpen needs to be sorted out. Unfortunately, the team has no budget to make any big trades.

But by the end of interleague play, we should know whether the Rays are a threat in 2009.