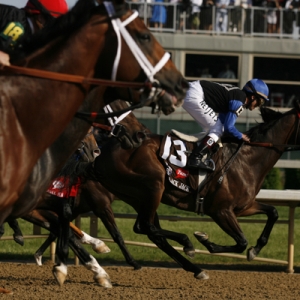 Handicapping the Kentucky Derby is almost an impossible task. The field is massive, the horses have to run farther than they ever have before in front of the biggest crowd they will ever see, the horses come from all over the country and the world and each is a star by some definition, and they are ridden by the best jockeys in the world. Ultimately, picking a winner requires a bit of skill and a whole lot of luck. That doesn't mean that bettors are totally helpless, though. The best way to start dealing with the field is to eliminate the runners that seem less likely to win. Horses like Giacomo and Charismatic have shown us that even the most unlikely horses can win, but it still makes sense to put a line through the names of horses that seem less likely to win. The bottom end of the field hasn't been filled out yet, so there will be other likely also-rans that will still emerge. Based on who is likely in the field now, though, here's a look at five runners I am willing to overlook.

Mafaaz - The Kentucky Derby, in apparent attempt to broaden its appeal in Europe, made the odd decision this year to grant an automatic Derby bid to the winner of a race at Kempton Park near London. This is the recipient of that spot. Unfortunately, he looks nothing like a Derby winner. After winning his spot he came over here to test the competition in the Blue Grass Stakes. It was disastrous - he wasn't even remotely competitive. He's only run twice this year, he's never run on dirt, and it's hard to believe he stands a chance. I'll be surprised if he is entered in the Derby despite having a spot, but even if he does I sure won't bet on him.

Desert Party - The rich sheiks that rule Dubai are determined to win the Derby, and they spend so much money that they are eventually going to pull it off. I'm really not convinced that this is the time, though. This horse was upset in the UAE Derby by Regal Ransom, and he faces a major step up in class here. He hasn't faced North American competition, and though he is physically very impressive I doubt his ability to manage that jump in class. The worst sign to me is the decision of jockey Frankie Dettori. One of the top jocks in the world, he rode Desert Party in the UAE Derby, but he has declined the Derby mount despite having never won the race.

Win Willy - This horse burst onto the Derby scene with a big upset in the Rebel Stakes over Old Fashioned, the horse that topped many Kentucky Derby contenders lists at the time. Win Willy exploded from deep in the pack to pull off the win. Win Willy took another shot at Old Fashioned in the Arkansas Derby, and it didn't go particularly well. He wound up fourth, and he was outkicked at the end - a bad sign for a closer. It wasn't easy to see his first success coming so he could pull off another improbable win in the Derby, but I just don't think that he's good enough in the end. Old Fashioned didn't win the Arkansas Derby, either, so the Rebel win is perhaps less impressive than it first looked.

West Side Bernie - This horse hasn't pulled off the big score, but he's headed to the Derby on the strength of a second place finish behind potential Derby favorite I Want Revenge in the Wood Memorial. That race was solid, but he was clearly second best there, and that was his best showing. He's facing a big style problem in the Derby - he's a closer, but so are many other horses in this field, including several with much better final kicks. This horse could be good enough to grab a piece at the end, but I really don't see him wearing the roses.

Chocolate Candy - This is the second big California based contender behind Pioneerof The Nile. He's been good, but I'm not convinced that he's good enough. He won two stakes to start the year, but they came against less than the top-flight three-year-old competition. In the Santa Anita Derby he was second, and though he had a very good race he wasn't good enough to win. He'll also be running on dirt for the first time in the Derby. My biggest issue with this runner, though, is his jockey situation. He'll have his third different jockey of the year in the Derby. This time it is Mike Smith, so he's in good hands, but it's a sign that a trainer isn't particularly confident in a horse when he changes so much.