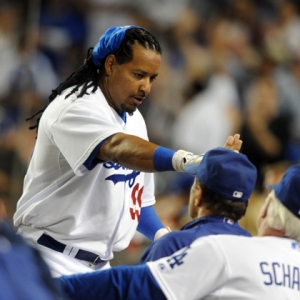 It seems like no player in baseball is clean anymore. In news that has to be described as shocking, Manny Ramirez has reportedly tested positive for performance enhancing drugs and is going to be suspended for 50 games starting immediately. Ramirez has been off to a truly blistering start this year - he's hitting .348 with six home runs and 20 RBI - and he has helped the Dodgers to the best record in baseball. Needless to say, this news changes everything for the Dodgers.

It's not known yet at this point what Ramirez tested positive for, and the player is reportedly going to claim that the positive test was the result of medication given to him for a personal medical problem. That is potentially true, but given the number of high-profile drug cases in the sport recently it's extremely hard to believe. It also appears that Ramirez didn't take steroids, but that the drug he did test positive for was clearly a banned substance by the league. Regardless of whether the drug was specifically taken for a competitive advantage or not, it's completely inexcusable for a player of this stature to be taking something questionable or saying that he didn't know what he was taking.

At this point it's impossible to overstate the impact that this development will have on the Dodgers. There are dozens of ways that this will affect the team. Let's look at five:

1. Loss of Ramirez - This one doesn't take a rocket scientist to assess - you take the best hitter in the world out of a lineup and the team is going to suffer. Ramirez hits so well that he can't be replaced. That impact goes beyond just the numbers he puts up. His reputation is larger than life, and he strikes terror into the hearts and heads of opposing pitchers. The team will likely replace Ramirez full time with Juan Pierre. He's a solid hitter - .300 on his career - but he doesn't have the presence or aura that Ramirez has, and that will immediately become obvious. Think of the boost that the team enjoyed once Ramirez joined them last year and settled in. It was massive. Now take the opposite of that and you could have what happens now.

2. Impact on rest of batting lineup - Ramirez is one of the rare players that impacts more than him in the lineup. Opposing teams can't help but try to pitch around him or strategically minimize his impact. That has a positive affect on the rest of the lineup. Andre Ethier and Orlando Hudson are both off to incredible starts, and the influence of Ramirez definitely factors in as a cause for that. We won't know right away what impact the loss of Ramirez will have, but it will be big.

3. Loss of confidence - Ramirez brings a swagger to the game, and he is so good that it's justified. Losing that will unquestionably affect the confidence of this squad. The way in which they lose their star will have a big impact, too. Players are lost all the time to injury, and teams can cope. The fact that Ramirez was caught cheating, though, makes the absence so much worse. Players could question what impact the drugs had on his performance, and how much of what they have accomplished this year is actually real. The potential psychological impact of this news is massive. On top of that, 50 games is a long time. That's two months - a third of the season. Knowing that long absence is looming, and that Ramirez normally takes a while to return to form after an absence, means that the players will be left to dwell on the fact that they are on their own for a long time.

4. Distraction - No one associated with the Dodgers will be able to go two minutes for the next two months without being asked about this situation. The media will be on high alert. This is a huge story - just think of how much coverage Ramirez got when he was clean. You can expect at least as much noise surrounding this as there has been from the A-Rod debacle. That level of distraction hasn't seemed to help the Yankees, and it certainly can't be viewed as a good thing for the Dodgers.

5. Fan response - Dodgers fans will feel betrayed. Opposing fans will have a field day both now and when Ramirez returns. Ramirez is a magnet of attention. The hometown crowd has been a big reason why the Dodgers have got out to a major league record start at home, so it can also have a big and far less positive impact going forward.

The biggest immediate lesson for bettors to take on this one is patience. The long-term loss of Ramirez is probably the single most disruptive roster move a major league team could currently face. There is no justifiable reason to bet on or against the Dodgers until we get a sense of how things will change and what this means. The team could immediately go into the tank, or they could rally in the face of adversity and stay strong before a likely decline. Until we get a sense we would just be guessing about the impact, and guesses are rarely profitable in the long term.

One interesting indicator that we can follow is the future odds. Last year when Ramirez joined the Dodgers they immediately dropped from 20/1 to win the World Series down to 15/1. This year they opened at 10/1 and fell to 7/1 in the face of their strong start. How those odds react immediately and in the coming weeks will give us a sense both of how the books are reading the situation and how the public is responding.