MLB Handicapping: How to Handle Manny's Return to Dodgers
by Trevor Whenham - 07/01/2009 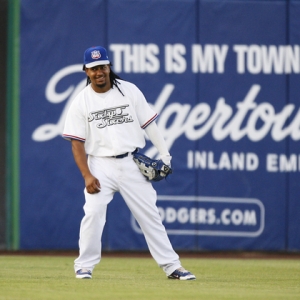 The circus comes to L.A. on Friday. That's when the disgraced and seemingly clueless Manny Ramirez makes his return to action for the Dodgers after serving a 50-game suspension for a failed drug test. The return will obviously set off a media firestorm, so we will be subjected to even more ridiculous 'insights' than we have had to hear from experts over the course of the last two months. That will be incredibly annoying.

The situation will be a very difficult one for bettors to get a quick handle on as well. It's very rare to see the best team in baseball make a major roster change, never mind one with so much uncertainty, emotion, and potential for disaster. As we get ready for Manny's return there are all sorts of questions that we have to, at the very least, consider. Here's a good look at several of them:

His form - Ramirez has been reasonably healthy throughout his career, so this is by far the longest absence he has had to come back from. That means we can't be sure how he is going to come back. The best we can do is look back to 2002 when he missed 30 games for the Red Sox with an injury. He was just 5-for-26 (.192) in his first week back from that injury. The setback wasn't lasting, though - he wound up the season hitting .349 with 107 RBI. This could be different because Ramirez isn't hurt, but we still don't know how he will play. His brief stints with two minor league teams tell us absolutely nothing - he wasn't facing major league pitching, and he certainly didn't seem committed to the situations.

The 'S' word - Ramirez tested positive for a substance used to mask steroids, so it seems like we could assume he was on some form of performance enhancing drugs at some point. That opens up all sorts of questions - What was he on? When was he on them? Is he still on anything? How much of an impact did they make on his game? What effect does coming off them have? We're in a very cynical era in baseball, and it's situations like this that unfortunately make it very easy to be cynical. Because we can no longer be sure exactly who Ramirez is we can't be sure who he will be when he returns.

His attitude - When Manny is at his best he is a funny, relaxed, pleasingly bizarre dude. When he's at his worst, like in his final days in Boston, he can make life miserable for himself and everyone around him. A lot of what happens in the immediate future will depend upon how Ramirez is feeling and how he reacts to what probably won't be a particularly pleasant situation. If he handles it with grace and dignity then the whole thing could blow over faster than we could ever dream. If he gets feisty, or if he pouts, though, then things could really get ugly. It's a volatile time in L.A.

Fan reaction - We can't be sure how fans in Dodgers Stadium are going to react to his return - probably in a very mixed way. We can be much more sure how he will be treated on the road - not well. Strong negative reactions can not only affect the player who is the subject of them, but also the rest of his team as well.

His reaction to fan reaction - As with his attitude, the reaction Manny has to the fan reaction will dictate much of how the situation plays out. He has yet to really face the music so far, but if he does decide to take some responsibility for what he did ad to react with humility then he'll be just fine. If he acts like nothing ever happened, though, or even worse he gets defensive or angry towards fans, then this could spin out of control.

Juan Pierre - There is no one in a more unfortunate spot in all this than Pierre. He was forced to step in to take over for Ramirez in left field, and he has been brilliant. His batting average is at a career high, and he already has more RBI than he has had since 2005. Now that Ramirez is back Pierre is back to being the fourth outfielder. He'll get some starts in left and center, but not nearly as much playing time as he has had recently. The team likely won't see a fall in production with the return of Manny, but they will miss the spark that Pierre has brought to things this year. He gets on base a fair bit, and he is always dangerous on the base paths. He also plays much, much better defense than Ramirez. He's not a better all-around package than Ramirez by any means, but it remains to be seen just how much the team will miss what he has to offer.

Team chemistry - When Manny came to L.A. last year he brought a light attitude to the clubhouse, and that showed on the field. When he was in Boston last year he had a negative attitude that bred resentment and tore the team apart. Whatever the Dodgers have going on in the clubhouse right now is obviously working, and there is no way that anyone who is not in that clubhouse can possibly have any idea how his return will be received by his teammates, and what it will do to the team. The team seems to be overachieving compared to what they have on paper, so the bubble could definitely burst if Ramirez poisons the clubhouse to even a small extent.