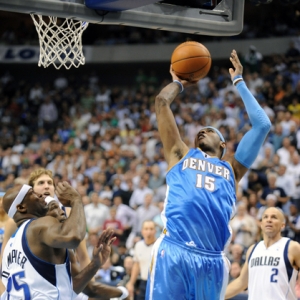 It's the old rest vs. rust argument in Game 1 of the Denver-L.A. Lakers series, as Houston surprisingly extended Los Angeles to seven games before losing at Staples Center on Sunday.

Denver, which is an amazing 10-0 ATS in these playoffs, has been off since May 13 when the Nuggets finished off the Mavericks in five games.

The Lakers are 6.5-point favorites on Bodog, and that seems like a lot of points to give up to a Denver team that is rolling right now - winning 18 of their past 27 games by double digits. Especially with L.A. being "bipolar," says Kobe Bryant.

But we're here to look at a few prop options for Game 1.

The first I like is the points total for Carmelo Anthony in this series. Melo gets an over/under of 25.5 points for the series, and the under seems like a very solid wager. I realize that Anthony is having a breakout postseason, averaging 27.0 points, including 30-plus in the final three games of the Dallas series, on 48 percent shooting.

But against the Lakers in the regular season, in which Denver lost three of four, he averaged just 14.5 points on 32.8 percent shooting from the field and 20 percent from the three-point line. It seems the height of the Laker frontcourt gives Anthony problems.

"They are going to shift the whole defense on me," he said to reporters. "I just continue doing what I've been doing throughout this whole playoffs."

There also are props comparing Anthony's scoring average this series to Bryant's, with Anthony getting 3 ½ points. Melo, who suffered a bruised thigh in Game 5 against the Mavericks but says he is "fine," is getting 5 ½ points for Game 1 against Bryant's total.

Take Kobe. He averaged 31.0 points per game this season against Denver, which is in the top five of his average against all opponents this year. The Nuggets will rely mostly on Dahntay Jones to slow Kobe, and he's solid but not in Shane Battier's or Ron Artest's class. Those two Rockets "managed" to hold Kobe to 27.4 ppg in the last series, although Kobe did have two games with 15 points or less.

If there's a chance for Denver to slow Bryant, it will try to replicate the effort on Feb. 27 when the Nuggets beat the Lakers 90-79 and Bryant shot only 10-of-31 from the field.

"We were physical," Jones said. "We brought him to traps. He didn't get many one-on-ones."

The best prop bet option might be Denver point guard Chauncey Billups' totals in this series. He is averaging 22.2 points a game in the playoffs and shooting 54.1 percent from three-point range. Billups should have his way with Lakers starting point guard Derek Fisher, who is looking worn down and was torched by Aaron Brooks repeatedly last series.

Billups' average points and assists for the West Finals is 26 ½ on Bodog. He surpassed that average in both rounds so far, and that was against Chris Paul and Jason Kidd.