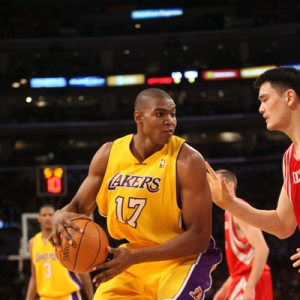 Denver's Anthony, who aims to be mentioned in the same class as 2003 draft-mates LeBron James and Dwyane Wade, not to mention Kobe Bryant, looked the part in Game 1 against the Lakers. He was torching so many Laker defenders (although mainly Trevor Ariza) that Kobe, without consulting Phil Jackson, decided to start guarding Anthony in the latter stages of Tuesday's game.

Melo still managed to score 39 points, almost triple his season average against L.A., on 14-for-20 shooting, but Kobe stole the show at the end, like he usually does. Bryant exploded in the fourth quarter for 18 points, making four of five shots and all nine free-throw attempts as L.A. won a game it shouldn't have, 105-103. Kobe finished with 40 points, nine above his average for the season against Denver.

The only negative facet was that Anthony did not score in the remaining 3:25 with Denver leading, 96-92. By all accounts, the Nuggets should have won the game.

Unfortunately, I recommended taking Bryant's total points -5½ for Game 1 of the series, and he obviously didn't cover that. But Anthony has me convinced now that he's nearly on par with Kobe, Wade and LeBron. He has topped 30 points in the past four playoff games and shot better than 50 percent in three of them.

Oddsmakers also are convinced, as Bryant is now giving just 3½ points to Anthony tonight. And I would say take Carmelo, but not simply for what he did in Game 1.

While I'm convinced that Anthony can approach his postseason average of 28.1 points each night now, it's hard to imagine Bryant hitting anywhere near 40 again tonight. The reason Kobe had to keep scoring on Tuesday was because no one else on the Lakers was. Derek Fisher and Pau Gasol each had 13 points for L.A. and were the only other Lakers in double figures.

"We had so many guys that looked indecisive out there, which is a credit to their defense," Jackson said to reporters. "[Bryant] was a scoring threat for us. We had very little else going for us."

Kobe played 43 minutes, hoisted 28 shots and had to exert full effort on the defensive end in dealing with J.R. Smith, Chauncey Billups and then Anthony. So you'd think he's bound for a letdown. Remember, too, that Bryant's finger on his right hand popped out during the game, forcing him to wear a splint after the game, and it was sore at practice Wednesday.

I'd also note that Bryant during the regular season averaged just 19.5 field-goal attempts in Lakers wins and 26.1 in L.A. losses. So that Game 1 victory was pretty unlikely all around for Los Angeles.

As for another safe prop bet option tonight, it would seem to be the under for Lakers center Andrew Bynum's total of 18 ½ points plus rebounds. Bynum continued his very inconsistent play on Tuesday night, again getting into foul trouble and scoring six points with six rebounds. Bynum has exceeded that 18 ½ total just twice in these playoffs, and Jackson tends to lose patience with him quickly.

Meanwhile, Denver is getting a fairly amazing six points again tonight on BetED. All three of the Nuggets losses this postseason have been by just two points, and they are still unbeaten against the spread in the playoffs. Don't look for the Nugs to shoot just 65.7 percent from the foul line again as they did in Game 1 - and that's what cost them the victory.