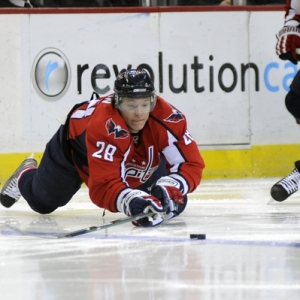 Thanks to a stunning last-second rally by the Carolina Hurricanes, the NHL will get the marquee matchup it was looking for when the No. 4 seed Pittsburgh Penguins and No. 2 seed Washington Capitals meet in the second round.

The series will be a faceoff of the league's three young bright stars, Sidney Crosby and Evgeni Malkin of the Pittsburgh Penguins and Alexander Ovechkin of the Washington Capitals.

They are not the only stars of the series, though. The two teams account for three of the top four goal scorers in the playoffs so far. Alexander Semin of the Capitals leads with five goals and Malkin and Crosby have both scored four goals. The matchup that could decide the series may not be the young forwards against each other, but instead the young goaltenders. Marc-Andre Fleury had one of the greatest games for a goalie in playoff history in Game 4 in the first round against Philadelphia but he was also inconsistent during that series. Fleury has a goals-against average of 2.39, which is eighth best among playoff goalies.

The big story in this series has been the play of Simeon Varlamov, the 21-year-old rookie goaltender that was thrust into the starters' role late after Game 1 of the first round. Through six playoff games, Varlamov has maintained the best goals-against average in the league, allowing only 1.17 goals per game.

Despite his impressive breakout first-round performance, it's unlikely Varlamov can continue this run of solid goaltending. He will face a much more potent offense in the Penguins compared to the Rangers, who only managed to get 15 shots on net in the deciding Game 7. In the third period of the last game he only faced one shot. Expect Crosby, Malkin and company to pepper him with a lot more than that.

Experience is another big issue in this series. While both teams are full of young stars, the Penguins young stars made a trip to the Stanley Cup Finals last season and general manager Ray Shero brought onboard veterans Bill Guerin and Chris Kunitz before the trade deadline. Along with Guerin and Kunitz, other Penguins that have already had their name etched on Lord Stanley are Craig Adams, Ruslan Fedotenko and Petr Sykora. The only Capital to ever win a cup was Sergei Federov, and he won three.

The showdown between Ovechkin and Crosby and Malkin will get a lot of play during the series but the experience of the Penguins role players and the goaltending of Fleury over the inexperienced Varlamov will be the difference in this series.