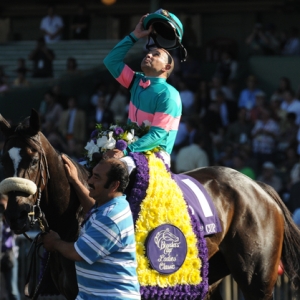 There will be 13 thoroughbreds contesting the 134th Preakness. The field includes a trio that shouldn't even be at Pimlico on Saturday. The following will give some Preakness tips for who to bet on Saturday.

Two horses trained by D. Wayne Lukas, who saddled five winners in 32 tries, each won only once and both would be considered throw outs. Both are 50-1. Flying Private is coming off a last place defeat by more than 43 lengths in the Derby, his 11th outing. Luv Gov just broke his maiden the 10th time out on Derby Day.

Tone It Down, also at 50-1, won twice and ran second twice at Laurel Park, but the victories were in optional claiming and maiden special weight races. The 50-1 shot drew post 12 and could finish there.

Big Drama: Credentials say sprints, but he only ran once this year, disqualified to second from a seven-furlong race at Gulfstream Park. Post 1 forces him to head for the front. Only three winners in the past three decades went wire-to-wire. His 10-1 odds won't stand up.

Take the Points: His odds equal four TDs, four extra points and a safety. He disappointed in two Derby preps, then skipped the Run for the Roses. His wins came in allowance and maiden-breaking scores.

Terrain: He hasn't tasted victory since last year. If you believe in hunches, he might be worth considering at 30-1 since he drew post six, which has produced the most triumphs -- 15.

Friesan Fire: The big question is whether the Derby favorite fully recovered from the many cuts he suffered during a disastrous trip in Louisville. He's 6-1 and breaks from post five. I'm unsure.

Mine That Bird: Derby champ also is 6-1 and drew post No. 2. If Pimlico comes up sloppy, his chances increase, but I'm not sure he can equal his May 2 performance. Losing Calvin Borel to Rachel Alexander hurts.

Musket Man: Here's the dark horse at 8-1. He's another victim of a troubled Derby trip. Might be worth using in exotics. I'm undecided.

Pioneerof the Nile: The early 5-1 third choice answered one question in his dirt debut by finishing second in the Derby. He overcame a troubled trip, but caused most of the trouble. Post 5 is a better draw than 16. Odds should drop. Don't leave him out of the exotics.

Rachel Alexandra: Which came first the odds or the post-position draw? The morning line: 8-5. Won't be that low when the race begins. The post: unlucky 13. No horse ever triumphed from there. Don't leave her out of the exotics.

Papa Clem: The son of Smart Strike, who sired '07 winner Curlin, endured the worst of the Derby trips from the break: brushed and bumped, then bumped in the stretch when Pioneerof the Nile forced him out. He finished only a nose and a head out of second. Five winners that drew Post 7 since '89 scored. He's worth a win wager at 12-1, and even if the odds drop a bit. He'll in all my exotics.