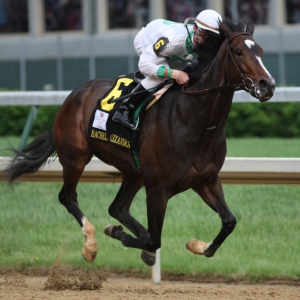 Rachel Alexandra is the biggest story heading into the Preakness Stakes. She's also a filly. For those of you who aren't big on horse terminology that means that she is a young female horse running against young male horses. The three year olds that can run in the Preakness are, in human terms, approximately late teenagers. Just like with teenage athletes the typical boy is much bigger, stronger, and faster than the typical girl. That means that in order for a filly to win a Triple Crown race she needs to not only be an extraordinary horse compared to other fillies, like Rachel Alexandra clearly is, but she needs to be an extraordinary horse overall. That's a much more rare thing.

It's hard to handicap fillies in the Preakness because there are so few historical instances to draw from. Just 52 fillies have run in the 132 previous editions of this race. Further, just three of those 52 fillies have run since the beginning of the Second World War, so the relevant sample size is so small as to be meaningless. The first horse in the modern era to run in the race was Genuine Risk. She was the 1980 Kentucky Derby winner, and she became the first and only filly to ever finish in the money in all three Triple Crown races when she was second in both the Preakness and the Belmont. Winning Colors was the next filly in the Preakness when she finished third in 1988. Like Genuine Risk she was also a Kentucky Derby winner. The third and final modern filly is Excellent Meeting in 1999. After finishing fifth in the Derby, she pulled up in the Preakness with an injury. Only four fillies have won the Preakness, but none since Nellie Morse in 1924.

This will be the first time that Rachel Alexandra has run against the boys. As such, it's hard to assess just how well she measures up. She has thoroughly dominated every field of fillies she has faced, but she has hardly faced top fillies at any time. Her most impressive win, in the Kentucky Oaks, came against a field that was decimated by the late scratch of Justwhistledixie and the earlier defection of Stardom Bound. The story wasn't that Rachel Alexandra won the race - she went off at 3/10. The story would have been if she had somehow lost. Because of the weakness of the fillies we have faced we can't tell if she truly is as special as she looks, or if she just looks good in comparison.

One way you can compare horses that have never run against each other is by looking at Beyer speed figures. On that front, Rachel Alexandra measures up well. Sixteen of the last 17 Preakness winners have had two or more career races in which they earned a Beyer rating of 100 or more. Rachel Alexandra is the only horse in the Preakness field to have that distinction to her credit. As such, she could easily be good enough to win. On the other hand, the Beyer numbers were next to irrelevant in the Derby this year - Mine That Bird's career high Beyer was a pitiful 81, and he hadn't shown the significant improvement from his second year to his third that is typical of Derby winners.

One of the reasons that fillies can struggle against colts is simple intimidation. When a filly and a colt go head-to-head the colt will often emerge in the end because he is able to assert his dominance over the filly. We don't know if that will be an issue with this filly, but we may not find out either. Rachel Alexandra tends to like to get to the front early and stay there. If she is able to get to the front easily out of the gate then she won't have to pass any colts at any point, and she might not even realize that it's boys that she is beating.

This particular filly sits at the crossroad of two conflicting trends. She is likely to be the Preakness favorite, potentially a heavy one, and this is a race that likes its favorites - 19 of the last 23 favorites have finished in the money, and 10 of them have won. As such she deserves more respect than the typical favorite. On the other hand, Rachel Alexandra did not run in the Kentucky Derby. In the last 25 editions of the Preakness, 23 winners have previously run in the Derby. Nine of those 23 winners also won the Derby.

This story is unique on so many levels. It's almost impossible to determine how good Rachel Alexandra is until the bell rings and the gates spring open. Effectively handicapping this race will essentially take a big leap of faith, then - you need to decide whether you believe in her or not and bet accordingly. I think I tend to believe that she'll be far from a good betting value, and that the best shot at a good return comes from hoping she gets beat, but I haven't fully committed to that yet. I can't get the image of that 21-length win in the Oaks out of my mind. That's incredible even if she was running against a pack of mules.