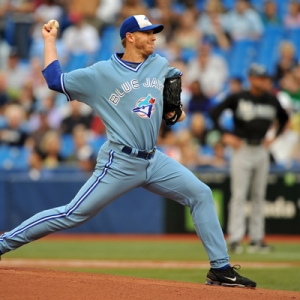 I have enjoyed few in things in baseball more over the last few years than watching Roy Halladay dominate for Toronto. It's time, though, for the Blue Jays to come to terms with a sad truth - it is time for them to trade their ace. He's the best pitcher in baseball right now, and with a year and a half left on his contract at a reasonable price his value will never be higher. It will be a painful move for the team and its fans, bu they only need to look around for examples of how much their future can be helped by making a move like this now.

The Rangers are very competitive this year, and that's in part because they sent Mark Teixera away in his prime, and got two key current pieces - catcher Jarrod Saltalamacchia and shortstop Elvis Andrus - in return. Baltimore isn't competitive yet, but they will be soon thanks to their young talent which includes outfielder Adam Jones, who was acquired from the Mariners for ace Erik Bedard.

The Jays need to make a deal and they need to make it now. Right now Halladay is by far the best option available. The longer they wait, the more other choices a team that needs pitching could have - Jake Peavy could get healthy again, the Indians could decide to say goodbye to Cliff Lee, and so on. A team that picked up Halladay now would also have him for the entire stretch drive. He's probably still good for nine or 10 more wins this year.

So, where should Toronto send him? And which teams should be looking to pick him up? Here's my Top 5, in order of preference:

Philadelphia - I have nothing but respect for Jamie Moyer, but a team that has Jamie Moyer second on the depth chart is going to struggle to win their division. Picking up Halladay would give the Phils the scariest one-two punch in the majors, and would put them in the driver's seat in the NL East for the next two years. Toronto needs and deserves to get at least two potential stars back in the form of prospects, so Philadelphia needs to make a sacrifice here. That means perhaps saying goodbye to guys they deem untouchable like pitcher Kyle Drabek or outfielder Dominic Brown. They seem hesitant to do that, but it would certainly be worth the risk. Halladay would allow this team to compete when their impressive collection of all-star hitters are in their prime.

St. Louis - If you heard the big ovation St. Louis fans gave Halladay at the All-Star Game then you know he would be joyfully welcomed in St. Louis. He'd be a great fit as well. The Cards already probably have the edge in the three horse race for the NL Central, but Halladay would put hem right over the top. The addition of an ace of this caliber would give them one of the deepest and toughest rotations in baseball. They have some nice talent they can afford to give to Toronto, including something the Jays could definitely use - catcher Bryan Anderson. Tony La Russa is perhaps the most dangerous manager in baseball when he has weapons at his disposal, and there is little doubt that the National League is wide open right now. The investment in this trade could put the Cards over the top.

L.A. Dodgers - Now this one could be fun. The Dodgers are the best team in baseball. They have some young talent in the pipeline, but they aren't the youngest team out there, so their window is smaller than some teams. Adding Halladay to this team would make them heavy favorites to win the NL. They wouldn't have to raid their minor league system if they didn't want to. The Dodgers have an excess of outfielders, so they could send someone like Andre Ethier away. The Jays would probably be thrilled to have a pitcher like Clayton Kershaw to build around, too. Kershaw and Ricky Romero could be a dynamic duo in a few years.

Boston - This move would make a lot of sense for both teams if they didn't play in the same division. The Jays have to deal Halladay because they aren't competitive in the AL East now and they need to find a way to be so in the future. Forcing yourself to face the best pitcher in baseball a few times a year isn't a good way to do that. Neither is pumping up the rotation of one of your biggest competitors. Besides that, though, the deal would be great. The Jays could probably pry away Clay Buchholz, a guy who already has a no-hitter. They could also add a few prospects for the future. Boston would make themselves almost prohibitive favorites in the AL if they had a rotation that included Beckett, Lester, and Halladay - not to mention Tim Wakefield - and would be almost unbeatable. And just think what would happen if Dice-K returned to form.

New York Yankees - The same divisional issues exist as with Boston, of course. Beyond that, this deal could work. Despite their best efforts and massive expenditures the Yankees still don't have a rotation god enough to win it all. Halladay could change that. Halladay could singularly change that. The Yankees have expendable pieces in exchange for a guy of Halladay's caliber, too - pitchers like Phil Hughes and Joba Chamberlain, and outfield prospects like Austin Jackson. If you really want to make things interesting then consider this - the Yankees could use another outfielder, and the Jays have talked about shipping out Vernon Wells. This could have the makings of a mega-deal.