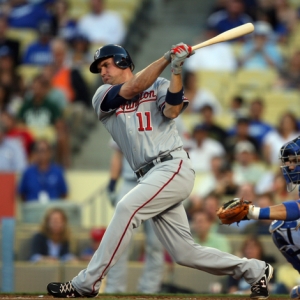 The Washington Nationals are lousy this year, but that takes nothing away from what third baseman Ryan Zimmerman is doing.

On Tuesday night, Zimmerman singled off San Francisco's Matt Cain in the first inning of another Nats' loss. That extended Zimmerman's hitting streak to a major-league best 30 games this season and was the 14th time during the streak that he managed to get a hit in the first inning.

"I'm not taking it any different than any other at-bat," said Zimmerman to reporters of his third consecutive first-inning single during the streak.

Zimmerman, in his fourth full season with the Nationals and easily the face of a faceless franchise, tied Royals legend George Brett's 30-game streak in 1980 for the longest by a third baseman since Pete Rose's 44-game streak in 1978 (Rose technically played two games in left field during his streak).

It's the longest streak in the majors since Moises Alou's 30 in 2007 and the 26th of at least 30 since Joe DiMaggio's unbelievable 56-game streak in 1941. Yet Zimmerman's streak is not even a franchise record - Vladimir Guerrero managed a 31-game run with the Expos in 1999.

And since you certainly don't want to bet on the Nationals as a team, as they have lost nine in a row to the Giants heading into today's game and have the worst record in baseball, the folks at WagerWeb, at our request, have come up with odds on where Zimmerman's hit streak ends:

So which number to jump on? Well, this decade there have been six streaks that hit 30 games, but only three that went past that number. And Zimmerman might feel a little pressure to extend it tonight because the Nats then return home from the West Coast (day off Thursday), and no doubt the team would get a significant attendance boost during the streak.

Washington currently ranks 29th in the league in attendance, so the franchise needs all the help it can get. Even Nats manager Manny Acta said it would mean a lot to the fans and the organization if Zimmerman could keep the streak alive until the team returns home. No added pressure there!

Today's Giants starting pitcher in the series finale is left-hander Barry Zito, and Zimmerman is 2-for-8 off him during his career. The Nationals' star is 2-for-4 off San Francisco closer Brian Wilson if that scenario comes into play.

The Nats then head home for 12 games, beginning Friday against the Phillies. Joe Blanton is scheduled to start for Philly in Game 1, and Zimmerman is hitting .455 of him in 11 career at-bats, including two homers.

Saturday could be a major challenge for Zimmerman, however, as Washington and Philadelphia play a day-night doubleheader. The Phillies' Brett Myers currently is scheduled to start the opener, and Zimmerman owns him, too, hitting .375 in 32 career at-bats. The problem might come Saturday night, as no doubt Zimmerman will be a bit tired and the Phillies haven't yet announced an official starter. There's nothing worse for a player than facing some minor-league call-up whom they haven't seen before and don't have much of a scouting report on.

For that reason, I would argue the streak might end Saturday night at 33 games.

The National League record is 45 games, if not limiting to a single season, set by Wee Willie Keeler in 1896-97. As for DiMaggio's big-league record, if there are no rainouts or Zimmerman doesn't get a day off, and there's no chance of that, he would have a chance to break the unbreakable record on June 11 at home against the Reds.

Happy betting, and thanks to WagerWeb.