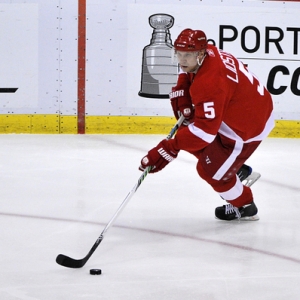 The Pittsburgh Penguins made very short work of the Carolina Hurricanes. In fact, they hardly looked like they had to break a sweat through much of their brief four-game series. A sweep can be a big advantage for a team in the grueling NHL playoffs. That advantage was quickly minimized by the Detroit Red Wings just one night later when they eliminated the Chicago Blackhawks in five relatively easy games. That means we don't have to worry about how to handicap one team coming off a layoff while another has to play much longer. It does give us a chance to look what happens when both teams get a break, though, and whether that gives one team a bigger advantage than another.

Pittsburgh ended their series on Tuesday night, and Detroit was finished by Wednesday. The Stanley Cup Finals open on Saturday night in Detroit, and follow up with the second game the next night. They then shift to Pittsburgh on Tuesday and Thursday. If necessary, (and I suspect it will be) the remaining games will alternate cities starting in Pittsburgh on Saturday, then Tuesday, and finally Friday. Here's a look at a few of the factors that could impact the teams as they prepare for their rematch in the finals.

Injuries - The extra couple of days off before the series starts won't be long enough to let injured players heal, but it will let some bumps and bruises get better, and it could let players who are on the verge of returning make it back into the ice. No matter how you look for it, this is an advantage for the Red Wings. Pittsburgh is a younger team, and they have gone through the playoffs relatively unscathed. Detroit, on the other hand, has been hit hard by injuries. Nicklas Lidstrom is the best defenseman in the league, but he battled injuries through much of the playoffs and was out for Game 5 of the conference final. MVP finalist Pavel Datsyuk missed the last three games of the Chicago series. Add in a couple more injuries, and other guys who are skating wounded, and you have a team that could use a bit of a rest. The shorter the rest that Detroit had, the bigger the advantage for Pittsburgh. The Penguins can at least be relieved that the rest is relatively short.

Momentum - Opinions are varied over whether momentum actually exists, and what impact it has on a series. If you believe in momentum then there is no question that Pittsburgh has a lot of it. Starting with the second half of the Washington series they have played almost flawless hockey, and their two best players have played like what they are - two of the three or four best players in the world. On one hand you could argue that the break - three rest days for Pittsburgh and two for Detroit - could be enough to interrupt any momentum that exists. On the other hand, the break is short enough that a team doesn't have to get too far out of its regular routine. It's not like the Cavaliers, who had what seemed like three months off before the conference final, and who have seemed to struggle as a result.

Removes any preparation advantage - If there was no real break between the series, or if one team had a significantly longer break than the other then its possible that a team could be underprepared for the big series, or that one team would be significantly more prepared than the other. Because the teams have an extra day or two off between the games, though, they will be ready for what they are about to face. Beyond that, though teams don't want to look beyond the series they are playing, the outcome of both conference finals were clear soon enough that the assistant coaches could have at least started their preparations well in advance. Comparative preparation won't be an issue.

Shrinks home ice advantage - Having the home ice advantage in the finals is a very big deal. The way that this series is set up minimizes that advantage for the Red Wings, though. First, Pittsburgh will have spent at least a couple of days at home before travelling to Detroit, so they won't be burdened by the impact of an extended road trip. Because the first two games are on back-to-back nights, Pittsburgh will barely have to be away from home at all. The quick turnaround between games could also be a problem for the Wings and their fans if they lose the first game - there will be less time to rebuild confidence. Detroit is still in a better position that Pittsburgh, but it's certainly not all that it could be.