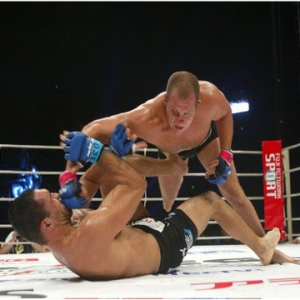 It has been several months since we last looked at our MMA pound-for-pound rankings, and much has changed. We'll get right into them, but before we do there's one clarification - the top three could go in any order. Fedor Emelianenko, Georges St. Pierre, and Anderson Silva are all so much better than the rest of their weight class, and than everyone else in the sport right now, that they are very tough to distinguish and rank. I went with one order, but I couldn't argue with any other. (Previous ranking.)

1. Fedor Emelianenko (2) - There is no way to knock this guy. He faces the top competition he can face outside of the UFC, and he annihilates them. Andre Arlovski was his last opponent. He's a legitimate fighter - a former UFC champ - but he was no match for Fedor. I'm not sure that there is a worthy opponent out there right now, but I sure can't hold that against Emelianenko. He's frighteningly dominant, and he seems to only be getting better with age.

2. Georges St. Pierre (3) - The Canadian has faced the toughest lineup of opponents in the sport over the last few years, and he has done extremely well against them. The strange loss to Matt Serra two years ago is the only blip, but he makes it easier to forget about that each time out. His fight against B.J. Penn this year was fantastic, and his showdown with Thiago Alves at UFC 100 could be even better. For  my money St. Pierre is the most impressive fighter in the UFC right now, and perhaps the most entertaining as well.

3. Anderson Silva (1) - It's probably not fair that I dropped Silva all the way from number one to number three despite the fact that he's coming off a win, but I do it for one good reason - he's boring. This hasn't always been the case, but recently he seems more interested in getting the win than with doing anything even remotely risky or entertaining. Silva has a chance to score some points and climb back up the rankings when he faces Forrest Griffin at UFC 101, but for now I've dropped him as low as I can.

4. Lyoto Machida (10) - Machida is the big climber on this list. The undefeated light heavyweight has two big wins since the last rankings - Thiago Silva in January, and Rashad Evans last month. Machida is not quite a household name yet, but he sure has the game to be. He's yet to lose, and he's in a weight class that has the depth and talent to really earn him respect. Rampage Jackson is the next opponent most people would like to see, but that's not likely to happen quite yet. Whoever it is, this guy is a joy to watch.

5. B.J. Penn (4) - Penn lands here almost by default. He was handled relatively easily by St. Pierre, but I'm reasonably convinced that Penn still reigns as the top lightweight in the UFC. He'll get a chance to prove that next time out against at UFC 101 against the exciting Kenny Florian. Penn needs this win badly. He's riding on his reputation to stay this high, but another loss would really challenge that.

6. Miguel Torres (5) - If I had to choose just one fighter to watch it would be Torres. the tiny little bantamweight is an absolutely ferocious beast. He hasn't lost in 17 matches over the last six years, and he shows no signs of slowing down. His fight last time out with Takeya Mizugaki was an instant classic. The only thing stopping Torres from being much further up this list is the relative obscurity of his weight class. I really wish the UFC would put bantamweights on their cards, because more people need to see this guy.

7. Quinton Jackson (7) - Jackson has bounced back nicely from his loss to Forrest Griffin last year, winning two in a row and climbing back to the top levels of his weight class. As I said earlier, I'd love to see him fight Lyoto Machida. That won't happen right away, though - Jackson is on tap to coach The Ultimate Fighter again, so his next match will be against opposing coach Rashad Evans. That's probably the second best pairing if we can't have the big one.

8. Mike Brown (8) - Brown may have gotten lucky in his last fight, but one fact is undisputed - he's beaten the impressive Urijah Faber twice in a row. Faber broke his hand last time out, but even if that happened Brown could have come out ahead. That win makes him the undisputed king of the featherweights. He's now won 10 in a row, and the last four have come against top ten opponents.

9. Rashad Evans (6) - Evans was a hard one to place in these rankings. He belongs here based on the bigger picture, but you can't put him too high because you just can't forget the massacre he suffered last time out at the hands of Lyoto Machida. That's the only blemish on his record, but what a blemish it is. He needs to pick himself up and prove himself, and that makes his next fight against Jackson even more intriguing.

10. Thiago Alves (9) - Alves drops slightly because he hasn't fought this year, but he had a great year last year, and he has an amazing fight on tap against Georges St. Pierre in July. I don't see him winning that one, but if he does he certainly will be higher on our next list.