NBA Betting: How Yao's Injury Changes Everything for Rockets
by Matt Severance - 07/01/2009 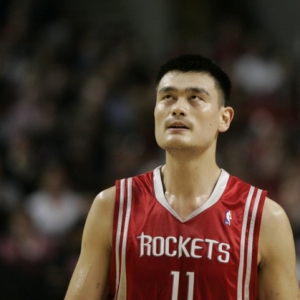 Currently Houston is +1500 to win next season's title on BetUS, but the Rockets have a much better chance of being a lottery team than a playoff team next year with the news that Yao Ming could miss all of the 2009-10 season with that foot injury that hasn't healed and actually has gotten worse. In fact, it might even be career-threatening.

Yao suffered a hairline fracture of a bone in his left foot in the Rockets' second-round playoff loss to the Lakers on May 8, coming in Game 3. Of course, undermanned Houston still managed to put up an inspired effort in being the only team to stretch the champion Lakers to seven games in the playoffs.

The Rockets initially said Yao would miss eight to 12 weeks, but a bone scan has revealed the fracture is not healing properly. The team isn't yet saying his season is in jeopardy, but the team physician said that - which infuriated team officials, by the way. Hello, medical privacy? Yao, however, is planning to meet with several specialists to consider all possible alternatives, including surgery or letting it continue to heal on its own.

Yao played in 77 regular-season games in 2008-09, his most injury-free season since 2004-05. And last season was his best. But that foot has been troublesome. In 2005-06, he broke a bone in that foot late in the regular season. He suffered a stress fracture in his left foot in 2007-08 and missed 26 games. Obviously his 7-foot-6 frame is putting too much pressure on his feet and legs (another trouble spot).

So if Yao is out, do the Rockets try and reload for another playoff run or just basically give up on 2009-10 and build toward the following season? The team has to make a decision on Ron Artest, who is a free agent. But remember that Tracy McGrady is expected to miss the first half of next year after undergoing microfracture knee surgery. T-Mac's $23 million contract is up after next season, so he could be trade bait even though he is hurt. With Yao and T-Mac both potentially out at least a majority of next season, it seems Houston wouldn't want to tie itself long-term to Artest, who tends to wear out his welcome quickly - although he was a good soldier last year. But Artest historically hasn't fared well as the "star" of a team.

Houston reportedly is looking at Magic free agent center Marcin Gortat as an option with Yao's uncertainty. But while showing some flashes, Gortat averaged just 3.8 points and 4.5 rebounds in 12.6 minutes per game as Dwight Howard's backup last season.

So what would a starting five of Gortat, Luis Scola, Shane Battier, Artest and Aaron Brooks accomplish? I'd argue not much. Sure the Rockets surprised the Lakers a few times with basically that starting five, with Chuck Hayes starting at center instead of Gortat. But when you are in a playoff series, that's much different than facing a different team every other night. Houston's energy and three-point shooting were incredible in winning Games 4 and 6 against Los Angeles. But Brooks also combined for 60 points in those two games, and that's not going to happen much. You need at least one superstar to compete in the NBA.

I expect Houston to throw in the towel on next season once official word on Yao's injury comes. GM Daryl Morey reportedly already has offered Battier and Brooks for Ricky Rubio, so that sort of tells you that Morey is thinking more toward the future than 2009-10.

As for Yao, he is under contract through next season with a player option for 2010-11 that would pay him more than $17 million. It's almost assured he exercises that option now - sorry, Cavs fans who were hoping he would team with LeBron thanks to new minority ownership from China in the Cavaliers.

Yao and McGrady, meanwhile, have played together in just 220 games in the past five seasons due to injuries to both. And the team couldn't even advance in the playoffs until it was McGrady-less. It's time to move on from a pairing that clearly never worked to begin with.

Look for Houston to be a .500 club next year, not re-sign Artest and try to make a splash in the big 2010 free-agent market or by trading McGrady.