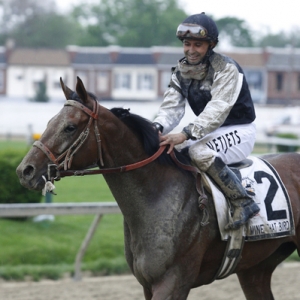 Each one of the Triple Crown races is very different, and each one requires a unique handicapping approach for success. The Belmont is particularly difficult because it asks horses to run further than they have ever run before, and than they will likely ever run again. Some horses can handle that, while others just melt in the face of the challenge.

You can't know for sure how a horse is going to do until the race is over, but there are some general trends that can give you an idea of a horse's chances. Here are six Belmont Stakes betting tips to help you pick out the potential winners from a group of pretenders:

Don't be afraid of the longshots - I love Mine That Bird as much as anyone, and I plan to bet him on Belmont day. I just won't make the mistake of thinking that he can't lose, or that another of the favorites is unbeatable. This is the race where longshots have reigned in recent years. Da' Tara won last year at 38/1. Birdstone, the sire of both Mine That Bird and Summer Bird, was at 36/1 when he won in 2002. Sarava came from absolutely nowhere to shock the world at 70/1 in 2002. Commendable was 19/1 in 2000, and Lemon Drop Kid was 30/1 the year before. Over the last decade the average winning price has been almost 20/1. Favorites typically win about a third of races, but the favorite has won just twice in the last 13 editions of the race. So why is the race so generous at the betting window? The distance is new for every horse in the field, and beyond the comfortable capacity of almost all of them. Until they actually try to cover the distance we don't know how well they will handle it. Add in the long spring season that comes before this race, the strains of the Triple Crown, and all the other factors, and this race is truly a crapshoot. You can feel comfortable picking the horse you like regardless of the price.

Be wary of inside posts - The race is so long, the stretch goes on forever, and the track is very wide, so you'd think that post positions would be virtually irrelevant for this race. Perhaps, but that hasn't shown in the results of late. The last four winners have started in gate seven or higher. Just one of the last eight winners have started inside the seven post, and that was Birdstone who started in post four. The average post position of the last 14 winners has been 7.3. It doesn't intuitively make a lot of sense, but you may want to pay special attention to the post position draw.

Think twice about horses that have run all three legs of the Triple Crown - This year that means just Mine That Bird and Flying Private. Horses can win this race after going through the whole grueling gauntlet, but they haven't been doing it a lot recently. Just one of the last seven winners of the Belmont have previously raced in both the Preakness and the Derby. That was Afleet Alex in 2005. The Triple Crown is a brutal test, so it takes a special horse to be at his best after going through it. That doesn't mean that you should ignore the two iron horses this year. It just means that you need to convince yourself that they are truly ready before you bet on them.

Triple Crown experience is a good thing. Maybe. - Of the last 15 winners of the Belmont, 12 of them have run in at least one Triple Crown race prior to their win. That would suggest that the grueling experience of one of the first two jewels gives the horses the maturity and seasoning that they need to win. There's one small caveat here, though - two of those three invaders have been Da' Tara and Rags To Riches in the last two years. You need to decide whether you want to pay attention to the recent trend or the more established on that runs contrary.

Jockey experience seems to be overrated lately - The Triple Crown is typically the domain of the top jockeys. They have the most talent and they get the best mounts, so it only makes sense that they would have the best results. Those big names haven't done as well in the last few years of the Belmont, though. Three of the last four winning jockeys in this race have won it in their first try. That ended a long streak of wins by far more experienced jockeys, but it is an undeniable indicator that you don't need to rule a rider out just because he hasn't put his time in in the race in past years.

Breeding matters - Four of the last eight Belmont winners have been sired by classic winners. Two more sires won the Breeders' Cup Classic. Of the remaining two, Seeking the Gold won multiple graded stakes and has turned into a top sire, and Northern Afleet won multiple stakes and was a son of a Canadian Horse of the Year and grandson of the great Mr. Prospector. In other words, this race is the domain of racing royalty. This isn't a new trend, either - the horses that win this race have success flowing through their veins. Horses that aren't well bred can accomplish big things in racing, but they don't tend to excel in the face of this incredibly difficult challenge.