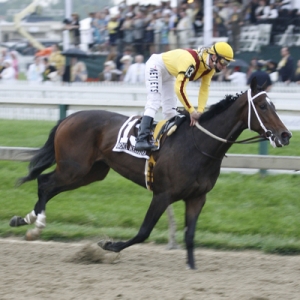 The jockeys are crucial in each of the Triple Crown races, but perhaps more so in the Belmont than the others. The length of the race is a real challenge for the horses involved, and is far beyond what any have run before, so managing the resources available and conserving energy are crucial. The abnormally long stretch at Belmont also requires a jockey to be experienced enough to know when to make a move. Otherwise, they can find themselves out of gas with a bunch of dirt still left to cover. To help you in your Belmont preparations, here's a look at the jockeys in the race. I'll put them in alphabetical order to avoid playing favorites:

Calvin Borel - Mine That Bird - By now I can only assume that you know Borel's story this year. He rode this horse to one of the more improbable Derby wins in history, jumped off of him to ride Rachel Alexandra in the Preakness and win, and somehow landed back on Mine That Bird in the Belmont. He hasn't won a Belmont before, but he has three Triple Crown wins so he is no stranger to the pressure. He's not as familiar with this track as he could be, but he is easily the hottest jockey in the country right now, and he has clear chemistry with the horse, so big things could happen.

Kent Desormeaux - Summer Bird - The connections of this horse decided they needed a jockey upgrade after the Derby. The original choice was the young Joe Talamo, but they reconsidered and opted instead for the much more experienced Desormeaux. He's a legend who has piled up five Triple Crown wins, including two last year on Big Brown. He has never won the Belmont in six tries, but he has come close, twice finishing second, including a heartbreaking loss by a nose when he was trying to ride Real Quiet to the Triple Crown.

Alan Garcia - Charitable Man - Garcia is yet another of the very good jockeys who are under 25. He's also incredibly talented - he won a Breeders' Cup race in his first try. He also has the distinction of being the defending champion here after he brought home the incredibly unlikely Da' Tara last year. This is a much better horse he is on this year, but he might end up running a similar race - sitting on the front in the absence of a blistering pace.

Garrett Gomez - Chocolate Candy - Gomez takes over this mount from Mike Smith. Gomez is unquestionably the best jockey in North America right now, and he has a long list of results to prove that. That makes his stat all the more mystifying - he has never won a Triple Crown race. He has had plenty of opportunities, but it has just never happened. Gomez was on this horse once before, winning on him in November.

Julien Leparoux - Flying Private - This is the horse that no one wants to ride. He has run in all three legs of the Triple Crown, and he has done so with three different jockeys. Robby Albarado rode him in the Derby and was terrible. Alan Garcia rode him in the Preakness, but he has jumped to Charitable Man here. In all, nine different riders have bee on this horse in his 12-race career. Leparoux rode him last year in a maiden race at Saratoga to very unspectacular results. Leparoux does not have a Triple Crown win, but he's young and extremely talented, so it is just a matter of time.

Jose Lezcano - Miner's Escape - Lezcano is another young jockey who is full of promise. He made his Triple Crown debut in the 2006 Derby, but this will be his first Belmont. He doesn't have a ton of experience at Belmont, though he has won stakes races on the surface before. Lezcano has ridden this horse before, and he won easily. This is the first time in eight career races that the horse hasn't had a first-time rider.

Rajiv Maragh - Brave Victory - This will be a big day for the young Maragh - his first Triple Crown mount. Though that will certainly play on his nerves, he does have an advantage - he is based in New York, so he knows the track well. He also has the reputation for being extremely studious, so he will be well prepared for this tough challenge. He rode this horse for the first time last time out, and he was a strong third to Charitable Man in the Peter Pan at Belmont. That was especially impressive since he lost his whip so he had to find other ways to encourage the horse.

Miguel Mena - Luv Gov - Jamie Theriot took over from Mena in the Derby, but Mena has got the mount back here. Mena has only ridden the horse once, but it obviously worked - it was the only time the horse won, and he was impressive doing it. Mena will have to rely on that chemistry here - he doesn't know the track particularly well, and he is making his Belmont Stakes debut.

Edgar Prado - Mr. Hot Stuff - If there is one guy you want on a longshot that appears to have little hope in the Belmont it is Prado. He won on Sarava in 2002 and on Birdstone, the sire of Mine That Bird and Summer Bird, in 2004. Neither horse was given much hope before the race - just like Mr. Hot Stuff. Prado isn't riding very well this year, but he is more than capable here and he certainly knows this surface. I really doubt that he will add to his win total, but he certainly will get more out of his horse than a lot of guys would.

John Velazquez - Dunkirk - Velazquez is one of the more maddening riders in the country. He's incredibly talented, and when he is in form he is almost unbeatable, but he is wildly inconsistent, and sometimes he just seems to turn his brain off in the post parade. He got this mount despite the fact that two previous riders of the horse - Gomez and Prado - didn't have Derby mounts at the time. Velazquez won the Belmont in 2007 aboard Rags To Riches, and he is by far the most experienced rider in the field over the Belmont surface.