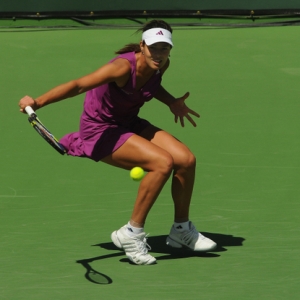 Four-time French Open Champion Rafael Nadal will need to overcome a nagging knee injury sustained in Madrid last week to surpass Bjorn Borg for the most consecutive French Open single's titles as tennis' second grand slam of the year kicks up the red dust at Roland Garros from May 24 to June 7.

Gamblers looking to increase their tennis viewing pleasure should be aware that sports investment powerhouse Bodog has provided futures propositions on the results of the Men's and Women's 2009 French Open Championships. This year, however, Bodog has a proviso in their futures betting on the Men's Championships: for your future's wager to have action Nadal must at least play a first round match to have action.

Who will win the Men's 2009 French Open Championship?

Last year in the French Open Final Federer Express suffered his worst defeat of his magnificent career; a 6-1, 6-3, 6-1 drubbing that seemed to eclipse all that he had accomplished in 10 years dominating the ATP circuit. A career at that point included a record 237-consecutive weeks at No.1 in the world, 10-straight Grand Slam finals, and 12 Grand Slam titles. And after losing for the third straight year to Nadal in the Finals at Roland Garros at least Federer would have Wimbledon to look forward to. But in the epic 2008 final Nadal ended Federer's 65-consecutive-game win streak on grass. And, fittingly, Federer just ended Nadal's 33-game winning streak on clay last Sunday at Madrid.

At the Magic Box in Madrid last week Nadal barely escaped Novak Djokovic, setting a Master's Series record for the longest three-set match at four hours and three minutes. Nadal lost the first set, but then stormed back to win the next two sets despite having his leg wrapped by the second set. This set up the final between Nadal and Federer, the first time the two had met in a final since the Australian Open and the first time since January that Federer has made a tournament final. Federer got a much-needed straight-sets win against Nadal on clay at Madrid. The win brings his record to only 2-10 on clay against the Majorcan. Certainly, Nadal still remains the player to beat at the French Open, but I'm not sure he'll have the health to play two weeks of Grand Slam level tennis on one of the most grueling surfaces on the tour.

Here are some of Nadal's impressive numbers: going into the French Open Nadal is 41-4 this season; he has won three out of five Master's Series tournaments, and already has one Grand Slam. Nadal has won 150 of 155 clay court matches. It's poor advice to recommend betting on anyone other than Nadal. However, with the knee injury and lengthy match the day before, the Spaniard looked almost human in his loss to Federer. But I am not entirely convinced that Federer has beaten back the Nadal demon. Nor am I convinced that either of these players will win the French Open this year. For those looking for a wise-guy short-odds to win play grab the world's second best player on clay, the Djoker at 10/1 to prevent Nadal from winning his fifth French Open in a row.

Who will win the Women's 2009 French Open Championship?

The latest player to earn the Rodney Dangerfield Award (playing the no respect card) is none other than 2008 French Open runner-up Dinara Safina, the newly-minted WTA No.1. In case you haven't heard, she has yet to win a Grand Slam, but has won two straight titles leading up to the French Open.

Safina, however, isn't the only WTA player to reach No. 1 without winning a Slam. Jelena Jankovic, who is listed below at 12/1 but has pulled out of the French Open, and Amelie Mauresmo, listed at 28/1, were also made No. 1 without having won a Slam. Then again, Safina has only been No. 1 for five weeks -- ever since she won her first Master's Series title of the year at Rome.

Defending Champion Ana Ivanovic is set at 12/1 to win. Keep in mind that Ivanovic has made the French Open finals the last two years; losing to Henin in 2007 in straight sets and winning in 2008 by dominating Safina. Following her win Ivanovic rose to No.1 in the WTA and then the photogenic phenom promptly went into an 11-month tailspin. Ivanovic still hasn't returned to her form of last year and will have a hard time at Roland Garros.

The Williams' sisters are all about the Slams, but Serena has only won the French Open once and that was back in 2002 when she beat Venus. Her last tournament final was at SONY Ericsson Open where she lost to Victoria Azarenka. Since, Serena has not made it out of the second round and most recently retired in the first round at Madrid. Venus won at Dubai and Mexico but, like her sister, also lost in the first round at Madrid; not a great sign going into this clay court Slam where a premium is put on fitness.

Elena Dementieva, No. 5, is set at 12/1 and might prove to be the toughest competition for the No. 1 seed. Dementieva has made the finals at the French Open in 2004 but she has not made a lot of noise on the circuit since January and those matches were on hard courts.

Safina is arguably the woman to beat this year considering she has the incentive after losing in the finals last year. She almost lost to un-seeded Lucie Safarova in the quarterfinals at Rome, but overcame a 0-2 deficit in the third set to win the title. Could this be a harbinger of things to come? Safina's gutsy win could be the turning point of her career. Safina showed her critics that she is able to win when the chips are down. Last week Safina won her second straight title on clay. Safina ran through the competition at Madrid with surprising ease beating teen sensation Caroline Wozniaki in straight sets. The question is will she be able to continue her success and dominate the French Open? I think so.