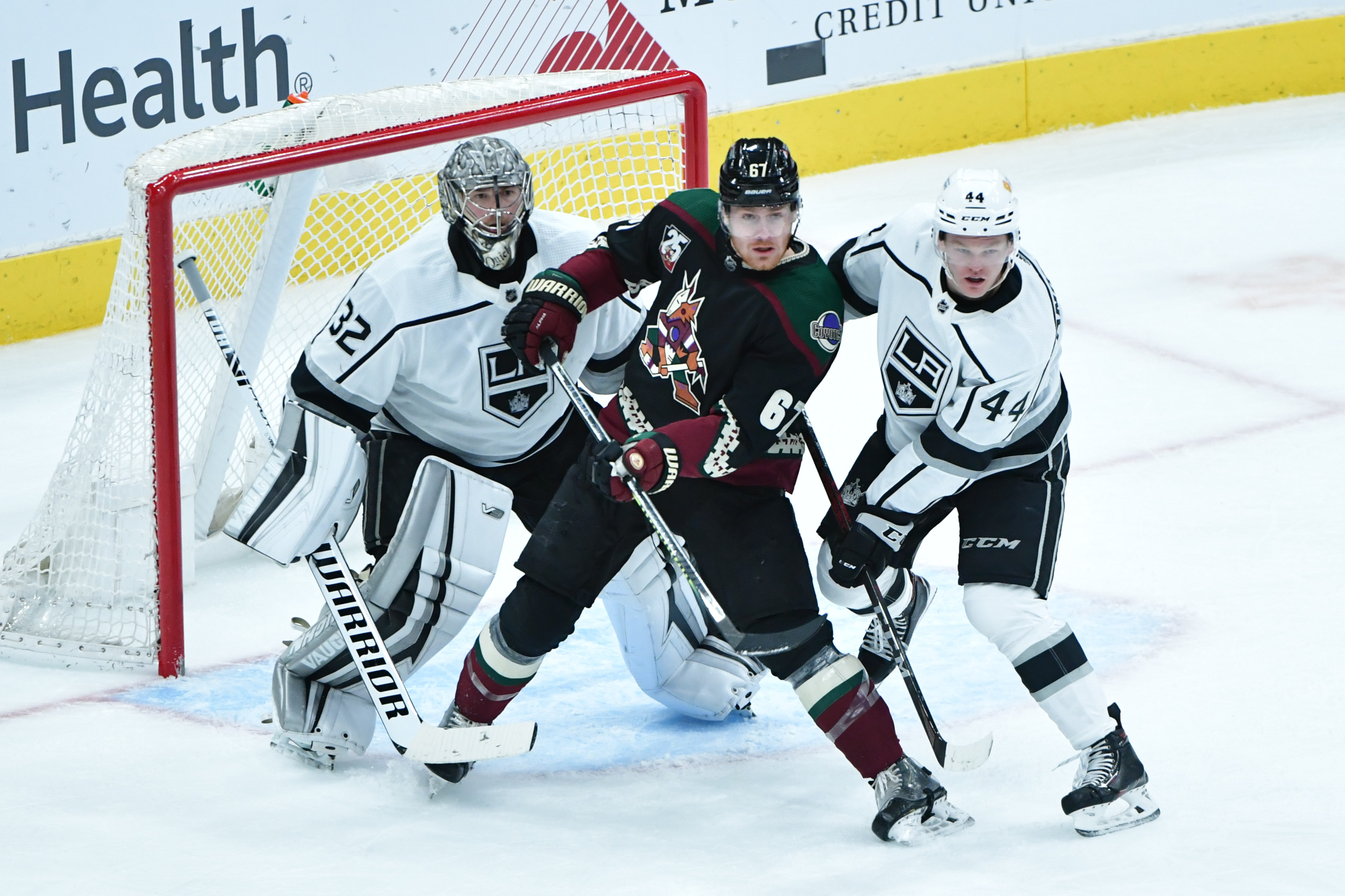 Doc's Sports Services is the most trusted and well-respected sports information company in the United States. Below you will find nine tips from the most advanced team of NHL handicappers. We do some of the most in-depth NHL handicapping in the country, and our service is second-to-none in terms of both results and customer relations. In our fifth decade of existence, Doc's Sports is the gold standard in the sports information industry.

We offer our clients top NHL predictions at one fair price. Our NHL handicappers release a full slate of NHL picks at 1 p.m. EST seven days a week. Every one of our NHL handicappers has a different style, but all have enjoyed vast success in professional hockey.

We offer many packages to accommodate anyone's needs - from one-day big play picks to one-week packages to our comprehensive full-season package.

Here are your 9 NHL handicapping tips:

DOC'S SPORTS - "What have you done for me lately?" That's the mantra you should adopt when handicapping hockey. The NHL is a fluid league as teams ebb and flow based on the grueling schedule, chemistry amongst line mates, injuries, etc. Look for teams that are playing well and maybe flying under the radar because of their overall record or a tough stretch in their schedule. Maybe a team is 1-4 in their last five games, but all five of those were against the top-echelon teams, and three of those went into overtime. That's a good sign as the scores of the games certainly matter as well as the shot attempts. There are plenty of deceiving scores based on a goaltender that stops everything coming his way despite the opposition dominating the puck that day. Break down those box scores and find out what is really going on.

ROBERT FERRINGO - I'm sure you've heard the saying that, "styles make fights" in regards to boxing. Well, it shouldn't be a surprise that this is the perfect sentiment to use when discussing the one sport in which players are allowed to throw punches on ice! To be a good hockey handicapper you have to understand the particular style of play that each team possesses. From there you can determine how they relate to one another. And, this is key, keep in mind that the majority of the time the home team in a game is able to dictate its tempo. So if a fast-and-loose Western Conference team rolls into an Eastern Conference rink to play a trap-and-grab team you should expect that the home club is going to set the pace. Home ice doesn't mean more in hockey than in other sports in terms of betting value. But knowing how each team likes to play and where they are playing will give you a framework of how the game will be played. From there you can determine where the value lies.

RAPHAEL ESPARZA - If you know the NHL game well or follow hockey religiously you can find some really good value in hockey betting. It's no secret that NHL is bet the least of all major sports, and I know for a fact that hockey wagers are only one percent of all bets being placed in Vegas sportsbooks. What does that mean? The oddsmakers don't pay much attention to the NHL season. So you can catch some soft moneylines because the oddsmaker is looking at the other major sports. Make sure you look at who is the starting goalie as well because that can determine the moneyline movement and the 'over/under'. Some back-up goalies are just as good as the starter, so you get a good adjusted number that has great betting value.

STRIKE POINT SPORTS - Don't waste your time with hockey totals! Hockey totals are by far the toughest area in which to make money betting on sports. There isn't much variance in hockey totals; they are all pretty much 5.0 or 5.5. And that right there should be a big red flag to prospective bettors. We've found that over the last several years that there are very rarely true "over" or "under" teams during an NHL season, and most teams are within a few games of .500 in regards to totals each season. Add in the fact that you have to deal with a lot of 'push' games on 5.0 and 6.0 totals, and the whole thing isn't worth your time. Just stick to sides in the NHL.

INDIAN COWBOY - We want to focus and share one main theory that we use in handicapping the NHL. It is called the "active underdog over theory". The active underdog theory is essentially taking an underdog that you believe will be an active underdog (either due to revenge against a team from an earlier season loss, coming off a double-digit loss, losing outright to a team they were heavily favored against, etc.) and taking the 'over' with this team. So you expect a team that is looking to exceed expectations over the line currently constructed for them. So anytime that you think a team that is an underdog is going to exceed expectations against a team then take the 'over'. This is because if the underdog is highly motivated as we discussed for revenge, coming off a double-digit loss, or losing outright to a team they were favored straight up against, then certainly they will be motivated to exceed the amount of points they are expected to score in their next game.

JASON SHARPE - I only focus on looking closely at the games in the -120 to +120 price range. I believe my brain (and most sports bettors) has been trained from many years of handicapping point-spread sports to try and look for bets that win at a 55% or higher. The problem people have with money line sports is trying to figure out if a team will win enough for it to make a profit. It's not easy to know the difference with a team being a good bet at -150 in a game but not offering enough value at -160. By playing only games between -120 to +120 means that I will show a profit if I hit these plays at about the same rate that I need to show in a point spread sport (53% or better or so). I take a look only at the games lined in this price range and then try and learn all I can about the teams involved in the head-to-head matchup. This means I don't spread myself too thin trying to handicap a full card of games. Instead I work very hard researching everything with games instead of taking a 10-game NHL card and trying to figure it all out by spending just 10 minutes or so on each game. I focus on trying to find the one play that stands out over the rest, and that's where I put my money.

DOUG UPSTONE - After being a three-time hockey handicapping champion for seasons 2014 through 2016, changes in the NHL have caused me to make adjustments to get back to that level. The game today is all about speed and skating, but there are still teams that have not caught on with how things have changed and think their more plodding style could give them a chance by being different. That is simply not true, so preseason research is key. The other aspect that has really emerged is lengthy winning and losing streaks. It is not uncommon today to see teams runoff six or more wins or losses in a row. After a team has won or lost three straight, hone in on that next game and see if the numbers point to them winning or losing again. If you are correct, unless there is a strong reason to not bet them again - Go With The Flow. If the streak grows to seven or more, you will have to pay more on the money line. However, like playing craps and having all the numbers on the table and you finally crap out, the amount won far outweighs the loss.

ALAN HARRIS - Look for spots to play the backup goalie. In many cases in the NHL, a teams' backup goalie will have stats similar to that of the starter. However, when they are inserted into the line-up, the money line will sometimes drop by 20 or 30 cents. Another play on this theory is when a starting goalie goes down with an injury that will make him miss significant time. Look to play on the back up until the oddsmakers adjust for the fact that really there isn't that much difference between the starter and backup in some cases. Also, the players know that the backup busts his hump in practice for them, and when he earns a start the players sometimes play with some extra effort to try and get the backup a win.

VERNON CROY - The NHL is one of the best sports in the entire world to bet on because the entire world does not bet on the NHL, so there is great value on a daily basis. The best tip I can give you when betting on the NHL is what you see is what you get, so do your homework and read the teams' news. Normally when a team has dominated another team in the past they will more often than not dominate them again, regardless if they are in a slump or not.

Get free NHL picks on every single game, or if you want our very best bet premium picks by the experts, sign up for your free $60 account with a guarantee.