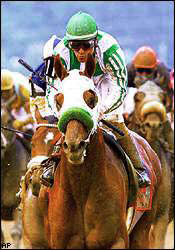 "Pimlico is more than a dirt track bounded by four streets," Maryland Jockey Club President, Alfred G. Vanderbilt said more than 50 years ago. "It is an accepted American institution, devoted to the best interests of a great sport, graced by time, respected for its honorable past."

"Old Hilltop" as Pimlico was once known, is the home of the $1 million Preakness Stakes, the second leg of thoroughbred horse racing's Triple Crown, run two weeks after the Kentucky Derby.

What sets the Preakness apart from the other races in the Triple Crown is distance; it is the shortest race of the three. At a mile and three sixteenths, it is one furlong shorter than the Kentucky Derby and a whopping three furlongs shorter than the Belmont.

But how important is distance on the road to the Triple Crown?

Distance is everything. And in modern times it has been the distance at Belmont that has dashed the hopes of recent Triple Crown contenders Smarty Jones in 2004, Funny Cide in 2003 and War Emblem in 2002.

In fact in the last three years the horse that won the Kentucky Derby has also won the Preakness, but all three horses were beaten at Belmont. Smarty Jones was beaten by the long shot Birdstone in 2004. Funny Cide lost to Empire Maker in 2003 and War Emblem lost to Savara in 2002. A shorter track at Pimlico is one reason we have seen the same horse win in Maryland after winning in Kentucky six of the last eight years.

The Kentucky Derby is known as the fastest two minutes in sports, however that is not entirely accurate; by virtue of distance the Preakness is. Churchill Down's Kentucky Derby is set at a mile and a quarter. The third leg of the Triple Crown, and perhaps the most difficult of the three races to win, comes in June at Belmont Park. The Belmont Stakes is a grueling mile and a half race or 12 furlongs - but you'd never call Belmont a 12-furlong race. It just isn't done.

If you are unfamiliar with how distance is measured in thoroughbred racing, in modern terms, a furlong is the equivalent of an eighth of a mile. In the United States, thoroughbred horse races less than one mile are calculated in furlongs while races of more than a mile use the United States customary units of a mile, mile and a quarter and a mile and a half. However, you won't see the length of a race described as a mile and two furlongs.

A combination of the grueling Triple Crown schedule and brutal Belmont distance are major factors why there has not been a Triple Crown winner in 27 years. Affirmed was the last Triple Crown winner in 1978 - but then the chestnut colt had rival Alydar whom he managed to beat by a length and a half at the Kentucky Derby, a neck at the Preakness and just a head at Belmont.

Whether it is the distance of the race or the fact it is the second leg, the Preakness offers respite from the excessive media coverage that is the Kentucky Derby. While the Pimlico is older than Churchill Downs and has as much a tradition if not more than Churchill Downs, the Preakness is sometimes treated as thoroughbred racings' redheaded stepchild of the Triple Crown.

Sandwiched in the middle of the two, the Preakness garners wait-and-see attitudes in the press and with those casually interested in blood sport. Excitement is forthcoming when a horse wins the Preakness after having also won the Kentucky Derby-for obvious reasons.

With the 129th running of the Preakness Stakes less than two weeks away, NY Yankees owner George Steinbrenner's horse, Bellamy Road -- the Kentucky Derby morning line favorite -- will not race due to a popped splint in his front leg, but winner Giacomo will race along with Closing Argument and Afleet Alex.

The Preakness is as exciting as the Kentucky Derby and Belmont. However, trainers, jockeys and horses have to adjust their approach to this race. The Preakness does not favor closers like the Belmont, or even Churchill Downs, but it does traditionally favor stalkers.

While it might seem contradictory, the Preakness is known as a speed race, but rarely does a horse win here wire-to-wire. The race's turns are actually much like the Kentucky Derby, which makes the Preakness a faux stalker's race despite the comparatively short distance. In fact only 18 percent of the Preakness' winners have done so wire-to--wire.

On the first Saturday in May, virtually unknown Giacomo came from 18th place over the first half mile to win the Kentucky Derby. This is a similar approach to a race he'll try to repeat at Pimlico. Only this time he'll likely need to start out a bit better with a reduced field, Pimlico has a max capacity of 14 horses so Giacomo will need to stalk around third to fifth position if he hopes to win the second leg of the Triple Crown. So keep in mind when handicapping this race that at the Preakness Stakes on May 21, length matters.