Wimbledon, the world's oldest professional tennis tournament, culminates with presentations of Championship Trophies to five sets of Championships, the most visible being the Men's and Woman singles champs. The Men (Gentlemen) win a "cup", the Woman (Ladies) a "dish", in the British tradition of inequality for the genders. The Wimbledon trophy for each winner is displayed for several months of the year in the Museum at the All England Club. 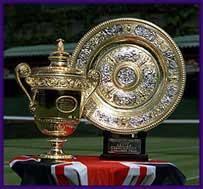 The tournament began as amateur only event for Gentlemen's singles in 1877. Spencer Gore, not likely related to Al, beat out 22 competitors for the Cup. It was not until 1884 that Ladies singles and men's doubles events began. The first non-European was May Sutton of the United States in 1905 when she captured the lady's singles title. American Althea Gibson was the first black player to win a Wimbledon singles championship in 1957, and she defended the title in 1958. The youngest male gentleman's champ was Boris Becker in 1985, at 17 years, 227 days old. He was also the first unseeded winner.

There are currently 20 grass courts used for play at the All English Club. Centre Court now uses huge fans at both ends to dry out the court when it inevitably rains. In 2005 the men's singles winner will receive about $1,165,800, while the women's winner gets about $50,000 less. In 1968, the year of the first "open"championships, the prize money was about $5000 for men and $1500 for woman.

The Gentlemen's Singles Trophy (the Men's Singles, in plain American English) is a silver gilt cup and cover, presented by the All England Club in 1887, inscribed "The All England Lawn Tennis Club Single Handed Champion of the World." The Cup stands 18 ½-inches high and has a diameter of 7 ½-inches. The Cup has a classical style with two handles and a raised foot. The lid is formed with a pineapple on top and a head covered with a winged helmet beneath each handle. There are two decorative borders with floral work and oval styled moldings on the bowl of the Cup and on the handles.

Since 1949, all champions have received a miniature replica of the trophy (height 8 ½-inches) to take with them.

The Ladies' Singles Trophy is a silver tray, sometimes referred to as the 'Rosewater Dish' or 'Venus Rosewater Dish', first won by the Champion when the challenge round was introduced in 1886. The original 50 guineas ( somewhere close to $150) trophy was made in 1864 by Messrs. Elkington and Co. Ltd of Birmingham and is a copy of an electrotype by Caspar Enderlein from the pewter original in the Louvre.

The tray, made of sterling silver, partly gilded, is 18 ¾-inches in diameter. There is a central design surrounded by four reserves, spread out to the rim. The remainder of the tray's surface is decorated with gilt renaissance designs and foliate motifs in relief against a rigid silver ground. It is a woman's dream silver tray.

The theme of the decoration is mythological. The central figure of Temperance, seated on a chest with a lamp in her right hand and a jug in her left, with various attributes such as a sickle, fork and caduceus around her. The four reserves on the sides of the dish each contain a classical god, together with elements. The reserves around the rim show Minerva presiding over the seven Liberal Arts: Astrology, Geometry, Arithmetic, Music, Rhetoric, Dialectic and Grammar, each with relevant attribute. The rim of the tray has an oval molding, much like The Cup. And again, beginning in 1949 all champions has received a miniature replica of the trophy (diameter 8 inches) for their personal collection.

The Ladies' Doubles Trophy is an elegant silver cup and cover, known as The Duchess of Kent Challenge Cup, presented to the Club in 1949 by HRH the Princess Marina, President of the All England Club. The Duchess of Kent is married to Prince Edward (also the Duke of Kent), and is presently Duchess Katherine (formerly Katherine Worsley).

This trophy is a silver challenge cup and cover presented to the All England Club by the family of the late S.H. Smith. S.H. Smith won the doubles title in 1902 and 1906, in partnership with the late F.L. Riseley.

We are in a new stage of tennis, where these traditions of Wimbledon seem so out of synch, but give perspective. Yet, Wimbledon remains the golden stage of tennis professionals. There have been so many world-class athletes that have endeared the sport to the hearts and minds of fans that makes us feel worthy of being fans among the kings, queens, dukes and duchesses. Today, we see as much variety in the personalities, dress and styles of tennis players as there are different surfaces of tennis. Some tournaments are played on clay; some played on cement, and finally the lawns of Wimbledon.

I guess there is entertainment value in this; the ceremonies concluding the event hold a certain power and grace of their own. The event is held outside London and with the traditions like "strawberry and cream" you can say this is truly a British event -- but the whole world has come to embrace it.

This year, the favorites are Roger Federer at 2/3. While on the ladies side Maria Sharapova is the favorite at 2/1. The tournament is played on June 20-July 3, ending before the United States can celebrate another year of independence.

My Dad will always refer to Tim Gallway's "The Inner Game of Tennis" which focuses on the psychological side of tennis and how it's applied on and off the court. He would claim that the experience, not the trophy, and pomp and circumstance, were the reward. Perhaps this championship, played on a natural surface, can be won by finding the mind's true nature. So amongst royalty is it the fame, fortune or experience that one gains while tears flow, and bows are taken at center court?

Do tennis players drink champagne out of the cup like hockey players? Does the game still appreciate its tried and true traditions? The competitors were all once white but now we have the Williams sisters. And now tennis has taken off on another plane. Anna Kournikova (retired but not forgotten) and Andy Roddick have become sex symbols and icons for wearing short shorts and pretty formal wear. Tradition is born a new!