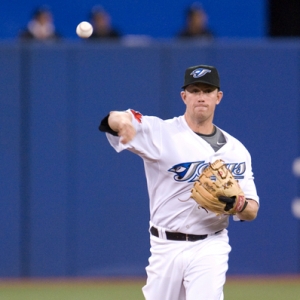 Over the last seven years very few teams in the major leagues have consistently outperformed their preseason expectations like the Toronto Blue Jays. Each year they are tagged as being subpar and each year they manage to compete with the Big Boys in the A.L. East and find a way to win 80 games.

So I guess we should have known that the Blue Jays were going to blow past their 79-wins projection this year and surge out in front of the A.L. East standings, right?

Over the last four seasons the Toronto Blue Jays have the most win in the Majors (336) without a single playoff appearance. And would you believe me if I told you that over the last 11 years the Jays have won at least 80 games a season nine times? Going even further, dating back 26 years to 1983 the Toronto organization has only failed to top 80 wins six times.

So they clearly have a history of producing winning teams north of the border. So why was there so much doubt hurdled towards the Azure Warriors heading into this season? I, for one, took one look at the starting rotation that the Jays were going to throw out this year and that was the crux of my personal futures play against them. Essentially it was going to be Roy Halladay and a bunch of ass clowns. I mean, Ricky Romero? David Purcey? Brian Burress? Brian Tallet? Who the hell are these guys? And in that uber-competitive division a team without pitching is like a Canadian without a denim-on-denim outfit in their closet.

But, surprisingly enough, the pitching staff has more than held its own. Their starter's ERA has been very mediocre at 4.50, good for 16th in the league, but their bullpen ERA is seventh in the league at 3.56 despite having to throw the third-most innings out of the 'pen so far this year.

Again, the pitching hasn't been great but it has been good enough. And good enough isn't too hard to accomplish when you have the best offense in baseball.

The Blue Jays are hitting an absolutely ridiculous .297 as a team so far this year. That is a full 14 points higher than the No. 2 hitting team in the Majors, the Dodgers. Toronto leads the league in runs, RBI, hits, doubles and OPS and they are second in home runs, on-base percentage and slugging percentage. Basically, the Blue Jays are rolling through opposing hurlers like a bunch of drunken lumberjacks through the Yukon.

I fully admit that I didn't see this coming out of the Jays this year. I saw a collection of washed-up or injury prone batters that wouldn't be able to generate enough runs to make up for a lousy pitching staff. But instead, they have about four Comeback Player of the Year nominees, including Aaron Hill (.357-6-24), Scott Rolen (.309-3-10) and Vernon Wells (.281-4-18). Also, manager Cito Gaston is managing to get the most out of veterans like Lyle Overbay, Kevin Millar, and Rod Barajas while helping to nurture up-and-comers like Alex Rios and Adam Lind.

The Blue Jays entered Thursday's action at 20-10 and in first place in the A.L. East. They have the best record in the American League and the second-best record in the Majors overall. And, most importantly, they have been the second most profitable wager against the money line this year, trailing only the Dodgers.

Also, on the strength of their weak rotation and amazing lineup, the Jays have gone 'over' the total more times than any team in the league (19) and are No. 4 in the Majors in terms of O/U percentage (63.3 percent).

The general perception around the league is that this team is going to fade. People expect the Red Sox, Yankees and Rays to all start to put their serious faces on and to eventually overtake the Jays once they run out of steam. But then again, everyone said the same thing about Tampa Bay last year and it didn't happen.

I will say that Toronto has benefited from a pretty favorable schedule to this point. They have faced just one playoff team from a year ago and have only played seven of 30 games against teams that have made the postseason in the past two years. Their current trip to the West Coast is only their third trip outside of The Motherland. And, most notably, the Jays also have not played a single game against the Red Sox, Yankees or the Rays this year.

I believe that the Blue Jays can continue to be a very profitable wager throughout this summer. As long as guys like Wells and Rolen manage to stay healthy their pitching can only improve as they get some arms back off the disabled list. Also, this team should continue to be "disrespected" by the oddsmakers, particularly against the more noteworthy teams in their division. I think that the Jays are a perfect chase candidate in those series because of their hitting and bullpen and I don't think that Toronto will be much of a sweep candidate at all this year.

This team is not going to go to the playoffs and I see them fitting into a similar mold as what the Florida Marlins did last year in the N.L. East, where they hung around until late August and until their shabby starting pitching finally caught up with them. And even that late slide by The Fish didn't stop them from becoming the fourth most profitable team to wager on in the Majors last year.

But don't be surprised if the Blue Jays ignore my nay saying and continue to win anyway. It's what they do.