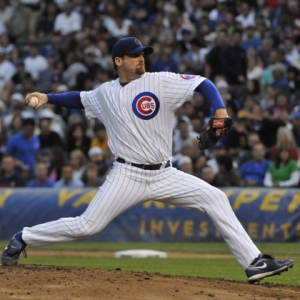 Earlier this week, I wrote that the Chicago Cubs were counting too much on the return of third baseman Aramis Ramirez to mask all the other flaws on the team.

You can't really call three games a trend, but in the three the team has played this week with Ramirez back in the lineup, the Cubs lost two and were held to just one run in each of those losses. Ramirez is 3-for-12 so far in his return, with no RBI or extra base hits.

But the Cubs' problems may have gotten much worse this week with the news of two injuries. The first was to pitcher Ryan Dempster, who rather comically fell as he tried to jump over the dugout railing to join his celebrating teammates following Sunday's win over Milwaukee. Even first baseman Derrek Lee laughed at the clumsy Dempster when it happened.

Only it turned out not to be too comical. Dempster (5-5, 4.09 ERA) was scratched from his scheduled start Tuesday because it turns out he fractured his toe in the fall. He will miss about a month, which means probably 6-7 starts, and was officially put on the DL on Tuesday.

"I caught my left foot on the rail as I was coming over. … The unfortunate part is my foot, because of the way it hit, came down straight into the ground. My toenail was ripped back and bleeding," Dempster said to reporters.

This is a problem for Chicago. Dempster is an innings-eater, something the team desperately needs when considering the inconsistent Carlos Zambrano and the injury-prone Rich Harden. Kevin Hart was called up from Triple-A and started Wednesday, taking the loss against Atlanta despite allowing just a run in five innings.

Hart will get the chance to keep the job while Dempster is out, but the career minor-leaguer (he has only 49 2/3 big-league innings in his career) isn't really the answer, even for a month. That start Wednesday was his first at the big-league level.

So the Cubs need to make a call to Pedro Martinez's agent. Pedro remains a free agent working out in the Dominican Republic, and Chicago did scout him there in June. The pitching-desperate Phillies also seem after him, as they watched Pedro throw a simulated game on Tuesday. Martinez, 37, was 5-6 with a 5.61 ERA is 20 starts last year for the Mets but was limited by a hamstring injury in the worst season of his career. He pitched in the World Baseball Classic and looked pretty good, but his salary demands scared teams off.

So does Pedro alone help the Cubs turn the season around and reach the playoffs? No, although the Cubs remain (shockingly) the BetUS favorites to win the NL Central at +130. But Martinez would be an upgrade over Hart at worst and would allow the Cubs to leave the valuable Sean Marshall in the bullpen. And it would help them tread water while Dempster is out.

The Cubs have a good staff when healthy, so they don't need to give up all their prospects for a Roy Halladay with Dempster back in a month. And unlike Halladay, Martinez wouldn't cost any prospects to acquire and then could shift to the bullpen when the rotation is back to normal. In addition, Pedro would be excellent insurance on Harden, who won't be making every regular start for the rest of the year - he's much too fragile for that, and the Cubs won't even ask him to.

Martinez might be in the catbird's seat right now with two NL contenders possibly bidding for his services. Of course, if the Cubs don't start hitting, no pitching addition is going to make a difference.

The second injury is still a bit up in the air. Catcher Geovany Soto, last year's NL Rookie of the Year, was scratched from Wednesday's game because of mild left oblique strain he felt during batting practice. This could be just a day-to-day thing or could land him on the DL. Soto is only hitting .230 with eight homers this year but did have hits in 11 of his past 17 games.

The Cubs should know Soto's status by Friday at the latest. If he is disabled, and oblique injuries tend to linger, Chicago is incredibly weak at catcher. Koyie Hill would become the starter, and he is a career .201 hitter. There's no one behind Hill at the moment.

Chicago closes the first half with four games in three days against the first-place Cardinals and seems unlikely to have Soto for that stretch.