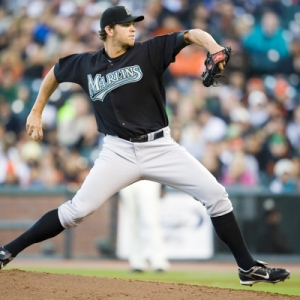 The Marlins, which actually appear to be some manner of angry marlin-piranha hybrid, simply do not give up. And the second that you doubt this team or think that they will go belly-up they Unleash The Fury and lay a Moby-Dick-on-Captain-Ahab beat down on your ass.

Only about 14 Major League Baseball teams manage to turn a full season profit for their backers. What I mean by that is if you were to bet on one team in every single one of their 162 games then you have a less than 50 percent chance of picking a team that would make you money. Well, the Marlins are on pace to turn a profit for their third time in four years, and this year's booty comes after being the No. 4 most profitable wager in the Majors last year.

At the start of business on Friday the Marlins were 45-42 and just two games back in the gritty National League East. However, despite their second-place stature and the fact that they are within weekend striking distance of first place outright there aren't too many people across the baseball or betting landscapes that think that they have a snowball's chance in Miami to actually compete this summer. But as people doubt, the Fish just keep winning.

Florida is an excellent combination of decreased team expectations from bettors, underrated individual and team talent, and a never-say-die attitude. While this club suffers at the box office from a lack of local fan support and a national malaise directed at their small market, those things combine to make them one of the best wagers in baseball.

Thursday's game at Arizona was a perfect example. The Marlins were coming into The Desert off a nondescript series loss to smoking hot San Francisco. Prior to that the Marlins had won five of six games against the Nationals and Pirates. The Diamondbacks had won five straight and were starting to get some love because they were "playing hard". As a result, the Diamondbacks were actually favored despite the fact that they have the fourth-worst winning percentage in baseball and they were facing a team that had more wins than 12 of the 16 clubs in the National League.

Needless to say, the game went about as expected. Arizona jumped out to a 7-0 lead heading into the sixth and it looked like win No. 6 was in hand. Well, the Marlins didn't stop playing. Instead, they hung 14 runs on the board in the next three innings - including a 10-spot in the top of the eighth - and the Fish stole Game 1 in the series, 14-7. That, my friends, is what the Marlins are all about.

And that, my friends, is why the Marlins should not be counted out when you're looking for your daily plays. Well, that and the fact that Florida boasts one of the best starting rotations and one of the most reliable relief corps in the National League.

Next to Atlanta, the Marlins have the best starting pitching in the East and that is why they will be able to hang around in that race all summer. Josh Johnson is a pure ace at the top of the rotation. Ricky Nolasco is an excellent sidekick at No. 2 and he has been outstanding since a brief stint in Triple-A to work out the kinks. Chris Volstad has been up-and-down but has shutdown stuff, and Andrew Miller and Sean West are the stock lefties that can exploit matchups and teams that don't hit southpaws.

It took Florida a while this season to settle in on their rotation - see: 4.97 May ERA, No. 26 in the Majors that month - but now that they have this team has been rolling. They are No. 5 in MLB in team ERA in July (3.06) and over the last 41 days they are in the Top 10 in team ERA at 3.68. Further, the Fish are No. 4 in the league in strikeouts, which definitely helps them get out of jams.

Also, this team actually blew nine of its first 19 save opportunities on the season. But since they have settled in at the back end the Marlins have converted 10 of their last 13 chances. That recent rate of 77 percent would be good enough for a tie at No. 2 in the Majors.

Strong starting pitching and reliable relief have helped this team to a 21-14 surge since June 1. And having Hanley Ramirez doesn't hurt either.

Ramirez is one of the best two or three players in baseball right now and all he is doing is hitting .405 over the last month. He has 14 home runs, 60 RBI, 103 hits and 12 stolen bases on top of his .348 batting average. And after overcoming some injury issues in May - he hit .250 for a two-week period near the end of the month; Florida went 4-8 - Ramirez is healthy and hammering away. And as he goes, so goes this team.

(And I can't write a story about the Marlins and not mention one of my favorite players in the league, Cody Ross. The guy is ridiculously clutch and is just always doing little things that help teams win. That guy will end his career with a ring, somewhere.)

Another great way to sum up Florida is the fact that if you kick out an ugly series sweep at the hands of the rival Tampa Bay Ray, the Fish are 8-5 as an underdog over the last month. Even if you kick in those three losses to Tampa that's still an 8-8 mark as a dog and that's still very profitable because of the plus-money involved. And that includes a win over Roy Halladay IN Toronto. Once again, that shows that they are a team that plays better when no one believes in them and their proverbial backs are against the wall.

So you keep doubting them and we'll keep collecting on them.