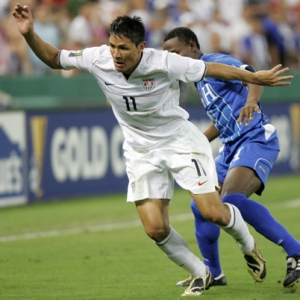 The CONCACAF Gold Cup moves on to the quarterfinals this weekend. Of the eight teams from North and Central America and the Caribbean, the United States is the heavy favorite this weekend. However, it’s not as heavy as a favorite as some may have expected.

The defending CONCACAF champions are –350 in three-way betting in their match Saturday night verses Panama (+875). Betting on a draw for the 8 p.m. tilt pays out +375.

The United States hopes it’s déjà vu all over again. Two years ago in the last Gold Cup, the United States got past Panama in the quarterfinals to win its second consecutive Gold Cup and fourth overall. Saturday’s games will be hosted in Philadelphia at Lincoln Financial Field, home of the Philadelphia Eagles.

United States coach Bob Bradley was there two years ago as were most of the players. During group play the United States had an easy time in its first two matches before having to rally back to tie Haiti 2-2 to clinch the group. The U.S. finished 2-0-1 in Group B.

However, group play success hardly tells the story when trying to handicap the United States in the further stages of the Gold Cup. The Americans are 23-0-2 in the group stage of the Gold Cup but they are far from unbeaten in the elimination stage.

And while the United States may be in a backpedaling motion of sorts on its way into the quarterfinals, Panama blazed a path to Saturday’s primetime game in Philadelphia. It earned a 4-0 victory in Glendale, Arizona, last Sunday over Nicaragua.

The United States has had success over Panama in the past with the aforementioned win over them in the quarterfinals of the 2007 Gold Cup and a win in the 2005 Gold Cup championship game. In those games, though, Panama was anything but overmatched. Two years ago it dropped a 2-1 decision to the Americans and in 2005 the championship game came down to penalty kicks.

It would take a near perfect game for Panama to pull off the upset but a price of +875 is extremely attractive here. The last major upset on the international level in soccer involved the U.S. when the Americans stunned Spain in the semifinals of the Confederations Cup. On Saturday the U.S. could be on the other end of the upset.

The other Saturday quarterfinal features Canada and Honduras, two evenly matched sides as evident by the odds. Canada was in the Gold Cup semifinals last time out but a look at the bigger picture shows just how disappointing things have been for the Canadians on the international level.

Twice in World Cup qualifying Honduras handed the Canadians major setbacks and denied them a chance to qualify for the 2010 World Cup in South Africa. One of the losses was a 2-1 defeat on Canadian soil in Montreal.

It has been a different story in the Gold Cup. Canada went 2-0-1 in Group A, defeating Jamaica and El Salvador and tying Costa Rica. Despite its troubles in international play Canada does own a Gold Cup Championship, winning it in 2000 with a 2-0 win over Columbia. That started a stretch of three semifinal appearances in the last five Gold Cups.

Even as Canada tries to turn the corner on the country’s struggling soccer program, new interim manager Stephen Hart and his team are still haunted by the two losses to Honduras in qualifying. In three-way betting +145 for Honduras is too good of a number to turn down as Honduras looks to make it three in a row over the Canadians.