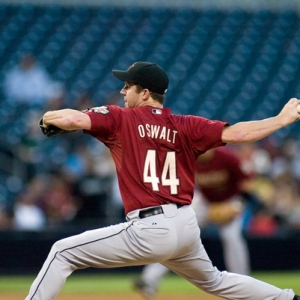 After watching the Houston Astros get hammered 22-0 in two losses this weekend at San Francisco it would be hard to convince someone that they were watching one of the hottest teams in baseball.

Over the last month Houston has been the best team that no one is paying any attention to. On May 28 the Astros were 18-27 and in last place in the National League Central, coming off a seven-game losing streak and nine games back of first place. There were threats of Cecil Cooper losing his job and according to Sports Club Stats the odds of Houston making the playoffs were less than 1.0 percent.

Since that point Houston has gone 23-14, they haven't lost more than two games in a row, and they have won eight of their past 11 series. They have also quietly worked their way back into playoff contention in their watered down division. As of the open of business on Tuesday they were 40-41. And while they are in fifth place in the Central they are just 3.5 games out of first place.

There is not much of a secret to what has helped put the juice back in Minute Maid Park: pitching.

Houston's starting rotation this year has been Roy Oswalt - whose demise has been greatly exaggerated - and four dudes straight off the scrap heap. Young Wandy Rodriguez went from being a dude who was dominating at home and a disaster on the road to a guy that could be counted on every fifth day. Mike Hampton has had a complete renaissance and has become another reliable lefty. And Brian Moehler has defied any type of logic, reason, or mathematics by turning a 5.64 ERA into an 8-2 team mark in his last 10 games.

And then there is Oswalt. It's becoming an annual spring rite that Oswalt gets off to a slow start, followed by stories about mystery injuries or him losing his touch. That serves to water down his odds, so when The Man From Mississippi kicks it into gear during the summer you can make some bank on one of the most talented arms in the game. It's actually pretty obvious just by looking at Oswalt's career splits that he's a later starter. He is 34-32 in his career in April and May, 24-12 in June, but then is an incredible 76-24 in his starts after July 1. Oswalt has given up just three runs in his last three starts (23 innings) and is 2-1 in those outings. As he becomes the ace the rest of the staff falls in line.

Overall, there is nothing exceptional about the Houston staff. They are 10th in team ERA, 12th in starter's ERA, and 14th in reliever's ERA. Mediocre all the way around. However, they lowered the league's No. 27 team ERA in May (4.96) by nearly a run-and-a-half to an exceptional 3.46 ERA in June. That drop, as well as the improvement of their middle relief, has really been the key to the turnaround.

Supporting the staff has been a defense that ranks sixth in the Majors in fielding. This is slightly watered down because the Astros don't cover much ground in the field. But the chances that they get they handle with aplomb and that is apparently enough to keep the pressure off their mediocre arms.

As for the lineup, it's pretty simple: don't throw a lefty at the Astros. The right-hand heavy lineup is currently No. 5 in the Majors at hitting left-handed pitching. With Miguel Tejada, Hunter Pence, Carlos Lee, switch-hitting Lance Berkman, Pudge Rodriguez, and Michael Bourn all coming from the right side of the plate the options for the opponents are pretty simple: sit the southpaws.

Bourn's emergence as a legitimate leadoff threat has been a big boon for a team that was No. 29 in batting at that spot in the order last year. Also, Lance Berkman has shaken off a pathetic start to the season and is entering a vintage Berkman you-can't-stop-me-from-going-2-for-4-all-weekend runs. Mix in all-star performances from awkward but effective Pence and off-the-roids-but-not-over-the-hill Tejeda, as well as the big boppings of Lee, and this team really has a solid core.

Despite the recent rally the Astros are still a bit of an enigma. Their team is loaded with proven veteran commodities throughout the lineup and the pitching staff. They finished last year on a 38-20 tear when they were already dead and buried in the division race, only to stumble and bumble their way through the start of this year. Are they for real? Can they compete? Can this group of seemingly lax veterans dig deep and find the grit to make a run this summer? I'm not 100 percent sure. But I do know that this is going to be one of the most interesting teams to watch as the trade deadline approaches.

The veterans have to be begging for the front office to make a move and bring in some pitching and maybe a left-handed bat. If upper management can come through and make a move (something akin to picking up Randy Wolf last year would be perfect) then I think it could really energize this locker room. But if Houston brass decides that fifth place - no matter how many games out they are - is just too far or that they will have to stand pat and try to win with what they have, then I believe that this club could crumble.