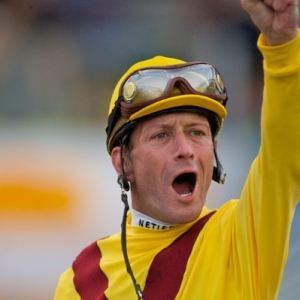 Since Sir Barton became the first Triple Crown winner in 1919, a total of 11 horses have won the Kentucky Derby, Preakness, and Belmont. Ten different jockeys have ridden those horses - Eddie Arcaro was on both Whirlaway in 1941 and Citation in 1948. Though Mine That Bird, this year's Derby winner, can't add to the total of Triple Crown winners since he was second in the Preakness, we still have a shot at a totally unique piece of history. Calvin Borel won the Derby on Mine That Bird, and the Preakness on Rachel Alexandra, so if Mine That Bird wins the Belmont then Borel will become the 11th jockey to have won a personal Triple Crown, and the first to have ever done it on two different horses.

Though this story has got a whole lot of press in recent weeks, I'm not sure that the truly bizarre, near-impossibility of it has been widely understood. To start, Borel was lucky enough to wind up on a horse that had the perfect skill set to win the Derby on that particular day. It's not like he planned it, either. In fact, he probably wasn't thrilled at the prospect. He had two horses with much more Derby potential in the months before the big race, but neither had survived the Triple Crown trail. That left him looking for scraps in the Derby, and he found them - a horse that had only run in New Mexico this year, and who had looked lousy doing it. No one gave the horse any chance, but Borel was going to be at Churchill anyway, so he probably figured that he'd rather watch the race from horseback than in the jockey's room.

Once he landed with the mount, Borel needed an incredible amount of luck. He not only needed to have space on the rail almost all the way from the back of the pack to the front, but he also needed a horse that had enough gas left to make the monster move, and who was small enough and brave enough to burst through some impossibly small gaps. No one could have known that he had that horse under his saddle, but he did.

Once he had won the Derby he made an unprecedented decision. No jockey had ever begged off the Derby winner in his next start, but Borel had the good fortune of being able to jump to the Preakness favorite. Rachel Alexandra was probably the best horse in the Preakness field, but Borel needed some luck that day, too. His mount didn't like the track at Pimlico, and she was very lucky to hold off a hard charging horse at the finish line - the very horse that Borel had chosen not to ride.

With two legs under his belt, Borel again needed some improbable good luck. It seemed unlikely from the start that Rachel Alexandra would run in the Belmont, but her connections took forever to make a decision. That could have cost him a ride. Instead, Mike Smith, who rode Mine That Bird in the Preakness, made the odd decision to skip the Belmont in favor of a much less significant race in California. That opened up the ride on Mine That Bird, but in most cases the delay in the decision over Rachel Alexandra would have tested the patience of Mine That Bird's connections and forced them to choose another jockey. They didn't do that, instead waiting and hoping that Borel would be available while other top jockeys jumped onto other horses in the field. Both Borel and the Mine That Bird team got lucky here - he wound up on the favorite for the second race in a row, and they wound up with the jockey of their choice instead of facing a potential disaster.

So now that's where we find ourselves. Borel is riding for a piece of history on top of a horse that is bred for the distance, has the heart to survive the ordeal, and who is facing a pace scenario that should set up well for his style. I'm not typically a person who believes in fate, but it's hard not to feel that Borel is destined to pull off this strange feat. Too much has worked out just right for him for it not to happen. There are, of course, problems. Chief among those is that Borel has virtually no experience on the long, quirky main track at Belmont. The stretch is ridiculously long at the track, and many unfamiliar jockeys have launched a sprint too early only to run out of gas before the finish line. Borel has also totally lost the element of surprise - everyone will know exactly how he wants to run the race, and they will be doing anything they can to stop him from doing it. Still, when I close my eyes and think about it, I have no trouble seeing Borel flashing his slightly creepy grin in the winner's circle early Saturday evening.