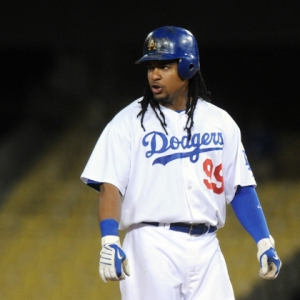 California wild fires, fueled by fierce ocean winds, are ravaging Southern California. But it was fuel of a different sort that led to Mannywood going up in flames today.

Manny Ramirez has been suspended for 50 games for violating Major League Baseball's drug policy. This news is less than a couple hours old so information is sketchy as to the nature and scope of his "usage". But early reporting from Peter Gammons - who is not prone to being used as a puppet - is that Manny actually wasn't using steroids but was suspended for using a prescription drug that was given to him by a Florida doctor.

Regardless of what Manny did and why, the bottom line is that the enigmatic slugger is going to be out of the Dodger lineup for most of the summer. And while I think that the impact on the field is going to be significant, I definitely don't think it's going to be as devastating as the knee-jerk, bobblehead reaction believes it will be.

Manny is clearly the difference-maker on this team and everything was built around him. He has been a mentor to the younger players and his looseness, his quiet confidence, and his professional approach at the plate have all been infectious in this locker room. The guy made the Dodgers almost unbeatable against left-handed pitching.

However, the Dodgers just went from being an elite team headed for a 100- or 105-win season to a very good team that will still win 85 to 90 games and will still win the West. That is the difference: with Manny the Dodgers are elite, and without him they are very good. So this loss did not submarine their season. In fact, it might even open up some strong value situations for them moving forwards as bettors and books overreact to his loss.

The Dodgers started the year as a 10-to-1 shot to win the World Series and had even worked their way up to 7-to-1 with their hot start. I believe we're going to see a backlash here, especially if they struggle at first without their leader, and we'll see this number dive back toward 15-to-1. I think that getting the Dodgers to win it all at 15-to-1 is an absolute steal. And I think that if you can get the Dodgers at anything higher than 7-to-1 to win the National League pennant you have to pound that.

Here are some reasons why the loss of Manny is bad, but not devastating, to the Dodgers:

This was a good team before he got there.
This was still a very good team on the verge of taking the next step before they got Ramirez last fall. A core of Andre Ethier, Matt Kemp, James Loney, Rafael Furcal and Russell Martin is still very good. Mix in true professionals like Casey Blake, Orlando Hudson and Juan Pierre and this club is still the best in the National League West.

This team is fortunate that it still has Juan Pierre to set up at the top of the lineup. And now knowing that all eyes will be on him I think that one of the feistiest, proudest, hardest working players in the league will step up.

The National League West still sucks
L.A.'s prime competition was going to come from the Giants this year. Arizona is terrible, even though it will improve a bit when Brandon Webb comes back. San Diego is terrible. The Rockies are the Rockies. The Dodgers still have the best team in the division. And what's great about this happening - the lines on them are going to plummet and we're actually going to find tremendous value on this club.

Joe Torre can guide the ship.
All this means is that Torre will have to take fewer naps in the dugout. But the guy is a future Hall of Fame manager and if he can handle the drama of New York City and the Yankees then there is absolutely no doubt that he can handle the apathy of the fan base in California.

Panic and pressure can sometimes bring out the best in people.
It's "all hands on deck" right now in the Dodgers clubhouse. The alarms are sounding and this team is going to go into "fight or flight" mode. Yes, there will be an adjustment period as the lineup shuffles and as the guys get used to the reality of not having Manny in the middle to clean up their messes. But at the end of the day everyone - from the makeshift pitching staff to the vets on the bench - is going to step forward with their best game. I think that the focus of this team is going to sharpen and I think that everyone is going to be ready to pick up the slack.

And in the end, I think that learning to play and win without Manny is going to make this an even better team.

He'll be back.
Apropos to end with a catchphrase from a state governed by Arnold Schwarzenegger. Manny's season isn't over. His career isn't over. The guy is going to miss a few months. That's it. The Dodgers have played 29 of 162 games. That means that when Manny comes back there will be more than half of the season remaining. That's more than enough time for him to find his groove and for this team to slide back into the groove that it's been in since the start of the year. And when this team is playing like it has been in the opening month it is clearly one of the two or three best teams in the N.L.

With Ramirez, and if this team can make a move and pick up another frontline starter, this club is right there with the Phillies, Mets, Cubs and Cardinals for the best in the National League.

In closing - DON'T BELIEVE THE HYPE. Everyone is going to act like the sky is falling in the next few days. Don't buy it. This is still a very, very talented team. And while they won't be the godless killing machines that they have been with Ramirez and through the first month of the year this is still a very talented team that we can collect with.