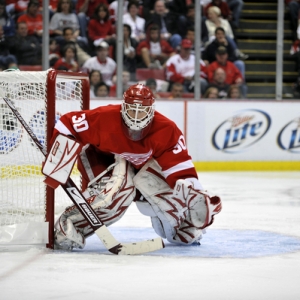 Early in the month it looked as if the top remaining seeds in each conference, the Boston Bruins in the East and the Detroit Red Wings in the West, were on the ropes and near elimination. Both top seeds have managed to bounce back, however, and force a deciding Game 7.

Three of the teams involved in Thursday night's Game 7s have accounted for the last three Stanley Cups. The Carolina Hurricanes lifted Lord Stanley in 2006 after the lockout season and the Ducks won in 2007 with the Red Wings filling the role of defending champs this season. Boston, the other team involved has not won the Cup since 1970.

No. 2 Detroit Red Wings vs. No. 8 Anaheim Ducks

Detroit ended Columbus' first trip to the playoffs in franchise history in abrupt fashion with a quick four-game sweep. It scored 18 goals in that abbreviated four-game series while only yielding seven, five of which came in a wild Game 4.

The Ducks shocked the Presidents' Trophy winner San Jose Sharks, the top overall seed in the entire league, in six games. They put the Sharks on the ropes early with back-to-back wins on the road and then iced the series with a pair of home wins in Games 4 and 6.

The Red Wings have seemingly all the experience in the world. Their players more seasoned than those of any other team in the league. They have veterans at all positions. Nearly the entire team that lifted Lord Stanley is back this year. There is one glaring omission from all that experience, however - Game 7 experience. The Red Wings have not played in a Game 7 since 2002. That was the legendary seven game series against the Colorado Avalanche in the Western Conference Finals.

It has been awhile for the Ducks too. During their cup run in 2007, Anaheim saw no Game 7s but they did in 2006 and they won on the road. The Ducks knocked off No. 3 seed Calgary in the Saddledome in 2006.

All the troubles the Red Wings were going through at Joe Lewis Arena seemed to come to a screeching halt just in time for the playoffs. Detroit had lost three of 10 at home to close out the regular season but against Columbus it defended home ice easily with 4-1 and 4-0 wins. They stretched the win streak to three with a 3-2 win over Anaheim in Game 1 but then came the triple-overtime series changing loss to the Ducks in Game 2.

The Red Wings rebounded with a 4-1 win at home in Game 5 but "The Joe" has not exactly been one of the tougher venues for visitors to win at lately. The Ducks have not had a problem entering hostile territories before. They won two games in San Jose and the previously mentioned overtime thriller at Detroit.

When it comes to value, the Anaheim Ducks have been the definition of it in these playoffs. The No. 8 Ducks have been underdogs in every single game this postseason. Even after stunning back-to-back wins at San Jose as +185 and +215 puppies, the oddsmakers still kept the Ducks as underdogs at home. Against Detroit, Anaheim has seen numbers from +130 all the way to +200.

Even after all Anaheim has accomplished in these playoffs, the oddsmakers are laying out another fat number at +220. Believe it or not, that is the highest price the Ducks have seen during the entire post-season. The oddsmakers continue to give Detroit the benefit of the doubt.

It's tough to find value for Red Wings backers here in Game 7. The -240 price is the highest for Detroit since Games 1 and 2 against Columbus where the Wings were -250 and -260.

The cup experience is there for both teams. Detroit has a veteran goalkeeper in Chris Osgood while the Ducks have their Stanley Cup winning goaltender, Jean-Sebastien Giguere, on the bench in favor of Jonas Hiller who has really emerged in this series as a difference-maker.

Anaheim center Ryan Getzlaf (four goals, 14 assists) set the tone during an all-out brawl at the end of Game 6. Getzlaf is playing as good of hockey as anyone this side of the Pittsburgh/Washington series. For all the experience Detroit has, it has not been on the brink of elimination in a long time.

If Anaheim can stay close early on, it has shown the ability to rally in the third period, especially on the road. The +220 price tag is too good to shy away from here especially with this Ducks team.

No. 1 Boston Bruins vs. No. 7 Carolina Hurricanes

It was no mistake that the Bruins reached the second round. They steamrolled the Montreal Canadians in four games, outscoring them 17-6. Carolina, on the other hand, walked a little closer to the edge in the first round. It got two goals past legendary goaltender Martin Brodeur in the last 90 seconds of regulation to sneak past the New Jersey Devils in a Game 7. During the series they also won an overtime game and a one-goal game when a puck crossed the goal line with 0.2 seconds remaining.

Carolina firmly holds the edge here. The players still around from the cup year in 2006 went through two seven-game series that season including in the Eastern Conference Finals against the Buffalo Sabres and in the Stanley Cup Finals against the Edmonton Oilers. And as previously mentioned, the Hurricanes took the Devils to seven games in the first round.

The Bruins Game 7 experience comes from last season when it was on the wrong end of a 4-3 series at the hands of the top-seeded Montreal Canadians. The Bruins also played in a seven-game series against the Montreal Canadians in 2004 before the NHL lockout. Once again they were on the losing end of that as well.

Besides a Game 2 hiccup against Carolina where the Bruins lost 3-0, Boston has been pretty dominant at home. It outscored Montreal, 9-3, at home and defeated the Hurricanes, 4-1 and 4-0 in the TD Banknorth Garden. The Hurricanes have not had trouble at all when it comes to picking up big wins on the road. In these Stanley Cup Playoffs Carolina is 3-4 on the road including the Game 7 win, 4-3, at New Jersey and the series changing 3-0 upset of Boston in Game 2.

In all of its previous home games Boston has been at least a -190 favorite. This series the price has ranged from -190 to -200. The only game in this series to go over was the 4-2 Game 6 Boston win at Carolina. Games 3 and 4 were pushes with exactly five goals scored.

The Hurricanes are used to the underdog role by now. They have only been favored in three games during the entire playoffs and none this series. For their Game 2 win at Boston the Hurricanes were a +180 underdog and the oddsmakers showed Carolina little respect posting them at +180 again for Game 5 in Boston. Of course, the Carolina made the oddsmakers look smart as they went down, 4-0.

Cam Ward and Tim Thomas are both at the top of their games right now. Thomas was an MVP candidate during most of the regular season for his exceptional play in net and Ward has two shutouts to his name already in these playoffs and a Stanley Cup win from a few years back. However the real deciding factor here is just the general matchup between the two teams and where the game will be played.

The 3-0 Carolina win in Game 2 appears to be an aberration. During the regular season Boston went 4-0 against Carolina, beating them 5-1 twice and 4-2 twice. At the Garden Boston outscored Carolina, 9-3.

A lot will be made of Carolina's Game 7 experience and its win on the road against New Jersey in a first round Game 7, but that was the Devils and these are the Bruins. The price is high at -205 but not as high as it should be. There is plenty of value in taking a fired up Bruins squad on their home ice.