Check out this weeks NHL power rankings. Get free NHL Picks by clicking each of the handicapper pages under the "Advisory Board" section of the left side bar. 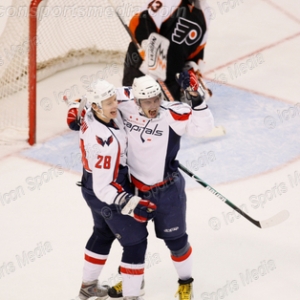 The regular season concluded and now the quest for Lord Stanley begins. Fourteen teams are done for the season while 16 remain. Players have put away their razors for what they hope is a three-round trip to the Stanley Cup Finals and a chance to raise the most famous trophy above their heads.

1) San Jose Sharks
Odds to win the Stanley Cup: +400
It came down to the last game of the season but the Sharks have won the President's Trophy for owning the best record in the league. They had a league-high 117 points and an unconscious 32-5-4 home record and this is where they will play the majority of their games thanks to home ice advantage.

2) Boston Bruins
Odds to win the Stanley Cup: +500
The Bruins and Sharks have traded back and forth for the top spot in the power rankings throughout the year so it is only fitting they end the season 1-2. The Bruins missed out on the President's Trophy by one point but they have a stat even more impressive than the Sharks' 117 points. The Bruins outscored opponents 274-196 this season, a hard-to-imagine margin of victory. Compare the Bruins plus-78 goal differential this year to other top teams in the power rankings, Sharks (53), Red Wings (51), Capitals (27) and the Devils (35).

3) Detroit Red Wings
Odds to win the Stanley Cup: +450
The defending champions remain a team no one wants to run into in the post-season. The oddsmakers have made them overwhelming favorites in the first round against Columbus. The series price for the Red Wings is -500, the highest out of any first-round favorite.

4) Washington Capitals
Odds to win the Stanley Cup: +600
The Capitals are hoping that the old adage "defense wins championships" is not true. Alexander Ovechkin and his high scoring teammates will try to blaze a path to the Stanley Cup Finals by being able to score goals like they have been in the regular season.

5) Pittsburgh Penguins
Odds to win the Stanley Cup: +1000
It was evident early on that this was not last year's Penguins team. Now it looks like they may even be better. After seemingly being destined to miss out on the postseason a year after reaching the finals, the Penguins got a new coach, added two top wingers to play alongside Sidney Crosby in Bill Guerin and Chris Kunitz and have only lost in regulation twice in the past 21 games.

6) Vancouver Canucks
Odds to win the Stanley Cup: +1200
It was said many places including here that the Flames had the Northwest Division wrapped up. The Canucks proved a lot of people wrong with an incredible last month of the season to catch Calgary and win the division.

7) Chicago Blackhawks
Odds to win the Stanley Cup: +1300
Don't look now but the Chicago Blackhawks have once again caught fire. They finished the season on a 7-2-1 run and end the regular season with the sixth best record (46-24-12) in the NHL. They will have their hands full with Calgary but home ice advantage should be a big boost considering Chicago is 24-9-8 when playing in the Windy City.

8) Carolina Hurricanes
Odds to win the Stanley Cup: +1500
They are not favored to win their first round series but seeing the series price at +115 for a Hurricane team that will face Division champs New Jersey tells you about either the lack of respect the guys in Las Vegas are giving the Devils or that they think highly of the Hurricanes. It is probably somewhere in between. This could be an easy first round upset.

9) New Jersey Devils
Odds to win the Stanley Cup: +800
The Devils hung on to win the Atlantic Division besides their best efforts not to. After putting together a nice winning streak upon the arrival of Martin Brodeur, the Devils simply wilted down the stretch. Still, any team with Brodeur in net that is still playing at this point in the season is a dangerous foe.

10) Anaheim Ducks
Odds to win the Stanley Cup: +3500
They have longshot odds and the worst record out of all the playoff teams but you have to like what the Ducks were able to do in the last two weeks of the season, winning seven of eight games before a season-ending loss. The Florida Panthers, not playoff bound, have a better record than the Ducks, but the rules are the rules and Anaheim is in albeit with a tough first round matchup against San Jose where the Ducks are +300 underdogs to win the series.

11) Philadelphia Flyers
Odds to win the Stanley Cup: +1500
A late-season meltdown including a blown lead against the Rangers cost the Flyers a chance to get home-ice against the Penguins, the same team that eliminated them last season in five games. Things will not get easier this year for the Flyers as the Penguins are as hot as they were last year and the Flyers closed the season going 4-5-1.

12) St. Louis Blues
Odds to win the Stanley Cup: +3000
How this team is even in the playoffs is beyond me. Not that they do not deserve to be there, but I cannot imagine someone outside of St. Louis actually having them penciled in to still be playing. A three-game winning streak and 8-1-1 record over the last 10 games has the Blues in the postseason and with a manageable first round series against the Canucks.

13) Calgary Flames
Odds to win the Stanley Cup: +1800
The Flames clearly have the players to get it done but those players, along with most of the roster, has been nowhere to be found the last few weeks. Losing the Division crown to the Canucks really sent this team into a nosedive that it needs to get out of before heading to Chicago.

14) New York Rangers
Odds to win the Stanley Cup: +3500
The Rangers may have learned something from the New York football Giants of two seasons ago. Rather than resting players in a meaningless season finale, the Rangers showed up and posted a come-from-behind win against the Flyers that denied Philly a chance for home ice in the first round. Will it propel them to the Stanley Cup finals like the Giants gutsy Week 17 performance against the undefeated Patriots did two years ago?

15) Montreal Canadians
Odds to win the Stanley Cup: +3500
The Canadians are tied for the second worst losing streak to close out the regular season. Montreal, along with the Avalanche and the Islanders, has lost four straight games. Not exactly select company. If there ever was a team that backed into the playoffs, it is the Canadians. It will be quite the feat if they can prolong the first round series against Boston beyond five games.

16) Columbus Blue Jackets
Odds to win the Stanley Cup: +4000
They made fans wait eight years for a trip to the playoffs. Hopefully the fans will not have to wait another year to see Columbus win a playoff game. The Blue Jackets draw the dreaded Red Wings in the first round. Steve Mason will always give the Blue Jackets a chance and Columbus is one of the few teams to own a winning record against Detroit during the regular season (3-2).