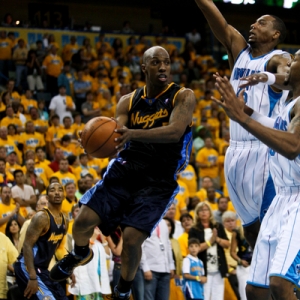 A friend of mine has told me that he is already bored with the NBA playoffs as he feels that there has been no drama. I disagree. And even though we've seen a strange amount of blowouts and then reverse blowouts (the team that got creamed the game before comes back to cream the team that just kicked their teeth in) I feel that the playoffs have started with a bang.

The Cavs and the Lakers have shown that they are the class of their respective conferences while the rest of the teams fight it out for the No. 2 distinction. LeBron and D-Wade have continued to show fans why they are two of the best players in the NBA. Oh, and Kobe hasn't been a slouch either.

The Dallas Mavericks and the Denver Nuggets are playing extremely well and they are trying to prove to the Lakers that they can compete out West. The Bulls are giving the Celtics everything they have and the 76ers are doing their best to make sure the second and the third seeds in the East don't get past Round 1. The 76ers, Nuggets, and Cavs have been impressive when it comes to ATS and fans that have backed these three squads are smiling all the way to the bank.

The Cavs are the only team that has made it to the conference semifinals without a scratch, and this is bad news for the rest of the East. Detroit was an absolute bust, as they showed no heart even in front of their home fans at the Palace. The Hawks, Hornets, and Trailblazers were the sexy picks at the start of these playoffs and they are a combined 4-8 ATS.

Look for Round 2 to have some intriguing matchups as it seems that L.A. will face off versus Ron Artest and the Rockets, D-Wade versus LeBron, and it is possible that Philly and Chicago (what?) will meet in the second series? Maybe, but then again maybe not.

With that said I give you 24 Seconds Around the NBA Playoffs:

24. Detroit completely gave up when they were fighting for their playoff lives in Game 4 after losing the first three games of the series by double figures. You would think pride would take over at some point, but I guess pride is not in Rasheed Wallace's vocabulary. Wallace wasn't even pretending to care about his team or this series. It was humiliating.

23. Ben Gordon is averaging 24.8 points for the Bulls through their first four games in their series with the Celtics. He is starting to show the NBA that he can and will become a superstar in this league. Now the bad news, as an MRI confirmed Monday that Gordon has a strained hamstring. He finished out Game 4 but if this injury becomes and issue the Bulls could be in trouble. And by "trouble" I mean that they will absolutely fold in a series that they definitely should win.

22. Denver has looked extremely tough through three games versus New Orleans thus far. This series has shown that Chauncey Billups is definitely "that good!" He has put on an absolute show, as his shooting and floor leadership have been unmatched. A 60-point win on New Orleans' home court slammed the door on the series. And it also made a statement to the Lakers that the Nuggets are a legit challenger out West.

21. The Miami Heat are lucky to have the MVP on their team. Yes, I said it and I mean it…DWade should be the MVP. He has taken a team that won 15 games last year, added a new coach that went through puberty five minutes ago, coaxed something out of decrepit Jermaine O'Neal, and brought this motley crew to the brink of the second round of the NBA playoffs. When Kobe had a weak supporting cast he didn't even make the playoffs.

19. The Philadelphia 76ers are 4-0 ATS in their first four games of their opening round series versus the Magic. Their sloppy, up-tempo, in-your-face style of play is difficult for teams to matchup with.

18. Speaking of the Orlando Magic: man do they miss Jameer Nelson. His leadership and shot-making ability is what kept this team afloat when their offense stalled in the half-court. In three of the four games of this series the Magic have seen double-digit leads evaporate due to their lack of experience, poor offensive sets, and a coach that looks like he is having a heart attack every five minutes. Someone shoot Stan Van Gundy with a tranquilizer dart.

17. Dallas is 3-1 both SU and ATS versus the Spurs in their playoff series, and it looks like it will improve to 4-1 after Game 5. Tony Parker has shown that he is one of the best point guards in the show but Tim Duncan has looked slow and groggy. Is it time for Timmy to retire? I just don't want someone that is so good to play through his down years.

16. These playoffs have felt like the underdog is a great play, but if you look closely at all the games thus far you would find that dogs are 16-13-1, while it is a better than .500 mark, it isn't as profit worthy as one might think.

That said, the underdogs went 3-0 on Monday and are on a solid 5-2-1 run. Also, if you don't count Cleveland's bludgeoning of the Pistons you would have the underdogs winning 60 percent of the games at 15-10-1.

15. The Utah Jazz are really good when they are healthy and I think a summer off will do them wonders. The only bad thing is Memhet Okur and Carlos Boozer look like they could be heading elsewhere. That would be a bummer for the Jazz faithful, because if it hadn't been for a load of injury issues this year I think Utah would have earned a much higher seed and would have been playing deep into May.

14. Houston has been a fantastic underdog play thus far in the playoffs as they are 2-0 ATS when getting points. However, they are 0-2 ATS when they are a favorite. The average gamer would think that the Rockets wouldn't cover in the Rose Garden and they would at home. But I guess that is why the average bettor doesn't win much.

13. Don't look now but we have a chance to see Philly versus the Bulls in Round 2 of the Eastern Conference playoffs. Boston and Orlando are not playing up to their best, due to injuries, and the 76ers and the Bulls are taking advantage. Both series stand at 2-2.

12. Without Kevin Garnett the Celtics are just not nearly as good and they cannot win a championship this year, plain and simple. They are, however, a solid 'over' bet. Boston is 21-8 versus the total on the year without Garnett, and they are on a 10-3 run over their last 13 games. Without him in the middle of that defense the opposing teams' guards can get to the basket pretty much whenever they want.

11. As stated before, Cleveland and Philadelphia are both undefeated ATS this postseason. An even more interesting stat is that both teams are 1-3 versus the total. The old motto that "defense wins Championships" might need to be changed to "defense covers spreads."

10. Carmelo Anthony played last night despite an elbow injury. He hasn't had a dramatic effect on this year's playoffs as C-Bill has been the main man for the Nuggets. But if this injury gets worse it might be time to fade Denver as the are just 8-7 ATS without Melo. Even more profit worthy is the fact that the Nuggets become an 'under' team as they are 5-10 versus the total without Anthony.

9. Trevor Ariza hurt his ankle in L.A.'s last game but he played Monday night. If Ariza misses any time moving forward it would be a sizeable hit on the Lakers team, as their bench would become a little thin in the backcourt. Ariza brings a ton of energy to L.A. when they become a bit stagnant.

But something tells me Kobe will have no problem making up for it. Also, look for former starter Luke Walton to get some more burn if Ariza is out.

8. Jamario Moon missed Game 4 for the Heat and if his groin injury is worse than originally expected the Heat will have trouble playing deep into the playoffs. This is already a rag-tag bunch outside of D-Wade and they just can't handle anything that hinders their limited depth.

7. How about Tony Allen trying to concentrate on basketball when he has guys in Chicago trying to kill him. I feel awful for the guy. I hope and pray that this gets handled soon.

If you didn't know, it's a widely known fact that some individuals in the Chicago area (Allen's hometown) have threatened Allen's life. There has been extra security around he and his Celtic teammates throughout this series.

6. According to sources, congrats are in order to Jason Terry for getting named NBA Sixth Man of the Year. I have always been a big fan of his. I also have an interesting tidbit of info for you: Terry would always order two orders of chicken tenders before games at the University of Arizona, eat one and thrown the other one away. Gotta love superstitions. And wasting food.

5. How good has Rajon Rondo been thus far in their first round series? Can you say the Celtics Most Valuable Player? I can! Rondo is averaging 23.2 points, 10.8 rebounds, 10 assists, and three and a half steals per game. This kid is showing Derrick Rose what a professional looks like. Don't get me wrong, I love Rose, but the sweet smell is Rajon's game.

4. John Barry is one of the worst announcers I have ever heard. He makes you think that his brother Brent is the best player in the league. Once I looked at his stats I realized why. Brent is shooting 100 percent from the floor this post season... Yup, 1-1 from the floor.

3. In keeping with that same note, you have got to love Jeff Van Gundy. The way he speaks his mind is classic television. It makes you year for Bill Walton. "OOOOHHH, right between the EYES!"

2. Out of all the playoff games thus far, 25 teams have scored over 100 points, while 25 have scored under 90. Looks like the average score of 95-94 is a thing of the past. You either shoot it great or shoot it awful, and that's part of the reason why there have been so many blowouts.

1. Check back soon for more 24 Seconds around the NBA Playoffs.