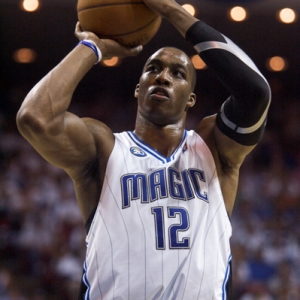 The first round of the playoffs has finally come to a conclusion with the finale of the weirdest playoff series EVER. Atlanta and Miami played a seven-game series with neither team staying within double-digits of the other. The better team definitely won and Atlanta will at least be able to give Cleveland a game, especially in Atlanta, but won't give them a series. I still see Cleveland winning this series rather easily, and sitting comfortably waiting for the winner of the other Eastern Conference semifinal.

Speaking of the other semifinal in the East, the series to watch in the second round will be Boston and Orlando. Boston struggled with the inside play of Brad Miller and Joakim Noah and now they have to go toe-to-toe with one of the best, if not the best big man in the NBA in Dwight Howard. One bright spot for Boston is the play of Ray Allen. "Mr. Shuttlesworth" is normally a no-show in the second season but after averaging 23.5 points versus the Bulls, including a 51-point performance, Allen has given the Celtics a ray of sunshine during their struggles without Kevin Garnett.

Out West the Lakers meet up with Ron Artest and the Houston Rockets in an intriguing series. Artest has matured into the leader of the Rockets and he is one of the few people in the NBA that actually has a chance of stopping Kobe Bryant, at least on one possession. I think the Rockets could actually surprise a lot of people and win a few games, including one in L.A.

Denver has been putting on a show out West as they absolutely destroyed New Orleans and followed up that series with a 14-point opening game victory over Dallas. I think that Dallas will give Denver a good series, and win one or two games in Big D, but overall I think we are looking at a Nuggets/Lakers Western Conference final.

Now sit back, relax, and enjoy 24 Seconds Around the second round of the NBA Playoffs:

24. Cleveland hasn't played since April 26, and to be honest they barely had to play versus Detroit. Many times too much rest hurts a team but in this case I don't see that happening. It isn't as if Atlanta is ripping through the league. I like Cleveland to win Game 1 by double-figures.

23. It's not as if LeBron James doesn't provide everyone with show-stopping plays and unbelievable skill, but now he has gone above and beyond by averaging 32 points, 11.3 rebounds, and seven and half assists per game in the playoffs. Wow! And it's crazy to think, but this kid hasn't even entered his prime yet.

22. The Cavs are 11-4 ATS in their last 15 games overall and this includes 10 victories by double-digits. Not only are the Cavs winning, they are blowing their opponents out.

21. Atlanta didn't look good in beating Miami and one of the main reasons was the play of Joe Johnson. Johnson only hit four three-pointers in the first six games of the series, but then erupted for six in the final game. If Atlanta is going to stand a chance versus the Cavs they are going to need Mr. Johnson to be HUGE, just like Billy Fucillo.

20. The Hawks won every game versus the Heat in which the outrebounded them, but lost each game that they didn't hit the boards. Cleveland is third in the NBA in rebounding margin, which means the Hawks have that going for them, which is nice.

19. Five of the seven games in the Heat/Hawks series went 'under' the total while three of the four games in the Cavs/Pistons went 'under' the total. The lines in this second round matchup are going to be somewhat low considering the Hawks and the Cavs are both top five in the NBA in team defense. Naturally, I like the series to generally go 'over'.

18. Boston needed every ounce of moxy to get past the Bulls in Round 1 while the Magic battled through injuries and suspensions. The loss of Jameer Nelson is going to be just as big as the loss of Kevin Garnett in this series. Mark my words. I think the reason that Orlando had such a hard time with Philly is exactly because they don't have a steady hand at the point. And that is the kiss of death in the postseason.

17. The Celtics covered three games in their seven-game series with the Bulls, which isn't very encouraging when considering that they are now playing a better team in Orlando. However, if you look at the two of the three games they did cover it was the most important two games: Game 3 in Chicago after the Bulls stole home court advantage, and Game 7. The Celtics are playoff tested and they know what it takes to win The Big One.

16. Rajon Rondo is lucky that he got to play in Game 7 versus the Bulls, after his third rough, I mean dirty, foul the league should have suspended the Celtics point guard. Rondo is having amazing playoffs thus far, averaging 19 points, 11.6 rebounds, and nine assists a game. But that gives the league no right to turn a blind eye to his Bush League defense. That type of bad karma always comes back to haunt a player or team.

15. Orlando needs Rashard Lewis and Hedo "TurkeyGlue" to take some of the pressure off Dwight Howard. When Lewis played well the Magic won, plain and simple. In Game 5 and 6, both convincing Magic wins, Lewis had 24 and 29 points, respectively. However, the Magic also have to realize that Dwight Howard is their main man. When Shaq was in his heyday teams got him the ball regardless of the fact that he couldn't hit free throws, and the Magic need to follow suit.

14. Courtney Lee is out for at least the first two games of the second round following his nasal cavity surgery. Lee is just "not feeling well" according to Coach Stan Van Gundy, aka "The Human Heart Attack". There is an outside shot that Lee could be available for Game 3 in Orlando.

13. The Magic failed to cover the spread in the first four games versus the 76ers, even though they had a double-digit lead in three of those four games. They did, however, get it together in games five and six, both double-digit wins, including one in Philadelphia. If they want to win in Boston they will need to figure out how to maintain a lead. The Japanese said it best, "I fear we have awoken a sleeping giant." I think that is what the Bulls might have just done.

12. The L.A. Lakers are in a similar situation to the Cavs. The Lakers haven't had to suit up since April 27, and now they are an eight-point favorite in the opening game in their series versus the Houston Rockets. Again, like the Cavs this shouldn't be a detriment to the Lakers as they are blessed with having one of the best basketball players on the planet on their team, which is a big plus, and a great coach. Yet, one thing that should worry Lakers backers is that they didn't finish games well versus the Jazz and time off might continue that lazy finishing trend…

11.Andrew Bynum didn't play very well, or much at all, in the series versus the Jazz. Bynum was even benched at one point and played less than 25 total minutes in games 3-5. If the Lakers want to breeze through the Rockets they will need Bynum to help neutralize Yao.

10. A key stat to keep an eye on in the playoffs is rebounding. As discussed earlier in the Hawks section we saw that if the Hawks were outrebounded they lost. The Rockets were the fourth-best rebounding team in the NBA in the regular season but their opponents in the second round, the Lakers, followed the closely in the fifth spot. Second chance points will be at a premium as both teams hit the boards with a fury.

9. The Houston Rockets are the type of team that isn't fazed by being on the worse-end of the home court advantage. Houston covered two of three games in Portland. The Rose Garden is one of the most difficult places to play and Houston went right in and won Game 1 in front of a hostile crowd. Playing at the Staples Center, however, is a different feel. When you look over to the sideline and see Jack Nicholson looking more and more like a werewolf every second, it gets a little intimidating.

8. One way a team can pull off an upset in the playoffs is to shoot the ball well from the free throw line and take advantage of free points. Houston is ranked fifth in the NBA in free throw percentage at 80.5 percent.

7. Denver has been an absolute machine these playoffs. Prior to this year the last time the Nuggets got past the first round was the same year that the Colorado Rockies finished their first season. This Nuggets team is different than Denver teams of the past for two reasons; one, Chauncey Billups, and two; they have been playing suffocating defense. If these two things can hold form they may have a date with L.A. in the Western Conference Finals.

5. Denver is 1-0 ATS in their series with Dallas, following a 5-0 ATS mark in their series versus the New Orleans. Five of the six games have been decided by at least 14 points.

4. Dallas is getting some outstanding play out of Josh Howard. Throughout this season Howard has been hobbled by different injuries. The Mavs are going to need Howard to continue his stellar play in order to compete with the Nuggets. Keep an eye on Jason Kidd as well. Kidd will have to be a difference maker for the Mavs to win in Denver.

3. Dallas has been getting some outstanding play from their reserves. Denver has one of the best benches in the NBA, but the Mavs boast the Sixth Man of the Year in Jason Terry. One of the two are going to have to step to the forefront as the starting fives for both teams should be very similar.

2. The old saying is "people save the best for last". Well, here goes: 10 of the 14 games that haven't gone into overtime over the past week have gone 'under' the total. That is a solid 71 percent winner. Gotta love that! This postseason has been about underdogs, 'unders' and blowout wins in big games.

1. Check back next week for 24 Seconds Around the NBA Playoffs.