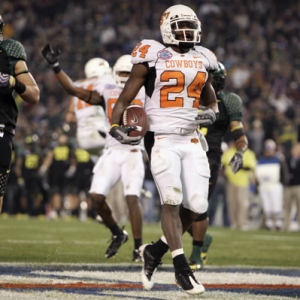 The Big 12's reputation took a bit of a hit at the end of 2008 as the conference that held almost half of the Top 10 spots at one point in the season fell flat in the postseason as they went a combined 4-3 in bowl games - including yet another BCS title game loss for Bob Stoops and Oklahoma.

This season is expected to be just as competitive as Texas, Oklahoma, and Oklahoma State all return their brightest stars, while Kansas and Nebraska look like they are ready to take another step forward in the North.

With two of the three Heisman Trophy finalists spreading the ball around the field this league is poised to be just as exciting as last years version. The following will provide some Big 12 football conference futures odds as well as predictions for betting.

The Skinny: Head Coach Art Briles made quite a splash in his first season in Waco by landing ultra athletic quarterback Robert Griffin. The Bears have never won more than three Big 12 games so this season is set up to be a success. The defense returns nine starters, so making their first bowl game since the formation of the Big 12 is certainly not out of the question.

Value: None. While Griffin is already drawing comparisons to former Longhorn quarterback Vince Young, the supporting cast is not quite what VY had in Texas. With the defense returning nine starters and the offense a year more experienced in Art Briles' system the Bears are more of a threat than ever before, but not scary enough to think they can win the Big 12 title.

The Skinny: The Buffaloes have yet to experience a winning season in the four year Dan Hawkins experiment, but much of that has been because of an influx of talent and a brutal schedule. This season, however, looks to be one where Colorado could turn the corner with Wyoming and Toledo in the OOC schedule and Big 12 North foes, Iowa State, Kansas State, Texas A&M and Missouri expected to struggle.

Value: Poor. While the Buffs may have a good chance to make a run in the Big 12 North it is unlikely they will be able to a) win the North and b) win the title game, making this a poor play. Colorado has yet to name a starting quarterback with coach's son Cody Hawkins leading the depth chart largely based on experience. However, it's not a foregone conclusion he will start the season. The Buffs do have one of the best offensive lines in the Big 12 so moving the ball on the ground could be a frequent play call.

The Skinny: New coach Paul Rhodes has made a quick run from being nearly exiled from Pitt, to Auburn defensive coordinator and now to a head coach at Iowa State. Rhodes comes back home after growing up 10 minutes from Jack Trice Stadium and he does have some talent on the roster. Quarterback Austen Arnaud averaged 250 yards through the air and 140 on the ground in his first year under center.

Value: None. Despite showing flashes of promise in 2008 the Cyclones do not have the talent to win the Big 12 this season. There are a lot of questions on defense and just how Paul Rhodes will be able to use his linebacker focused, play smart, defense to a roster without much experience or success to fall back on.

The Skinny: The Jayhawks have what it takes to win the Big 12 North this season as they return what looks to be one of the most explosive offenses in the nation. Three-year starter Todd Reesing returns at the helm and he will have his favorite two targets, Kerry Meier and vastly underrated Dezmon Briscoe back as well. The problem facing Kansas this season will be the defense, which finished ranked 114 of 119 against the pass in 2008.

Value: Some. With the Jayhawks the preseason favorite to win the Big 12 they are just one win away from claiming a Big 12 title. Overcoming whichever high power offense the South will send their way will be the problem. KU fans should be very happy however, as Mark Mangino has taken one of the worst programs in the nation and made them a legitimate contender.

The Skinny: The Wildcats have ended the Ron Prince era by bringing back Bill Snyder. While the program isn't in as bad of condition as when Snyder first took over in 1989, it's certainly not in a position to win the Big 12. Quarterback Josh Freeman left school early and it's now on the arm of Carson Coffman to lead the offense. The defense returns both defensive ends and three of four in the secondary, whether or not that is a good thing is yet to be determined as K-State finished last in the Big 12 in total defense last season.

Value: None. Kansas State will simply not be very good this season. With three winnable OOC games this year the Wildcats could sneak into a bowl game, but winning the Big 12 is out of the question.

The Skinny: Missouri will have to replace six NFL-drafted players from their 2008 roster and how they do that will ultimately determine the success or failure in 2009. 6-5 sophomore Blaine Gabbert takes over for Chase Daniel, maybe the most decorated quarterback in Tiger history. And while he does have Derrick Washington at his disposal losing Chase Coffman and Jeremy Maclin will be tough to overcome on offense.

Value: None. The Tigers could not win the Big 12 with Daniel, Maclin, and Coffman on offense they certainly won't win it without them. Linebacker Sean Witherspoon will have to lead a depleted defense the lost Ziggy Hood and William Moore to the NFL.

The Skinny: The Blackshirts are back in Lincoln. Bo Pelini, who was the defensive architect at LSU, has brought the swagger back to Nebraska as the team finished third in the Big 12 last season and return the best defensive front in the league. The Huskers lost quarterback Joe Ganz but coaches are excited to get Zac Lee under center. Lee, a 6-2, 210 pound athlete, has more arm strength and is more mobile than Ganz and could have NU poised to come back to prominence.

Value: Some. The Huskers look to be the team to beat in the North and a Nov. 14 showdown in Kansas looks like it could determine the Division. The linebacking corps is not strong but should benefit from excellent coaching and a great defensive line. The schedule should provide for a fast start before a showdown with Texas Tech.

The Skinny: Oklahoma is a program always loaded with talent and this season is no different as they feature as many as six first day NFL Draft picks. If the offensive line holds up Sam Bradford has a great opportunity to be only the second two-time Heisman winner. While the defense brings back a lot of talent on the defensive line they also allowed at least 28 points in six games, which could be cause for concern in a high scoring Big 12.

Value: Good. Oklahoma has to go on the road to Nebraska, Kansas, Texas Tech, and Miami as well as a neutral site Red River Shootout, which is as tough a road schedule as you will find in the country. The Sooners have the talent to make it back to the title game, but will have to get the offensive line in shape quickly.

The Skinny: Cowboys coach Mike Gundy not only reminds us that he is "a Man" during his now infamous postgame tirade he is slowly becoming "The Man" in Stillwater. Oklahoma State returns Big 12 leading rusher Kendall Hunter, All-American wide receiver Dez Bryant, and maybe the most underrated quarterback in the country, Zac Robinson. The team averaged 40.8 points per game in 2008 and looks to be a good bet to replicate that performance in 2009.

Value: Good. The Cowboys split their two toughest games with Texas at home and Oklahoma on the road. If they can win one of those games the conference could end in a three-way tie like last season. The defense will need to improve after allowing 103 points in their final two games (both losses) last year. To address this situation they lured defensive coordinator Bill Young from Miami (Fla.).

The Skinny: The Longhorns were two giant plays away from playing for a Big 12 title last season. A dropped interception followed by a magical play by Michael Crabtree dropped Texas into a three-way tie, which ultimately sent Oklahoma to the title game and a chance to play for a national title. Texas returns four on the offensive line, Colt McCoy at quarterback and leading receiver Jordan Shipley. The defense looks to once again be the strength of the team as coordinator Wil Muschamp brought a mental toughness to a team that was often perceived as soft.

Value: Great. Texas should have been playing for a national title last season and will certainly use that as motivation in 2009. The Sergio Kindle situation is unsettling but not something that should change the expectations for the team. Playing at Oklahoma State and the always biter Red River Shootout will decide the league standing.

The Skinny: The Aggies did not look good in 2008, including an embarrassing 41-21 loss at the hands of Baylor. And 2009 does not provide much hope for success as the home schedule sees Arkansas, Texas, Oklahoma State and even Baylor as tough to pencil in a win.

Value: None. Mike Sherman is believed to be a good fit at Texas A&M but with Tommy Tuberville still out of work he will need to show marked improvement to keep his job. The staff pulled a coup by getting talented RB Christine Michael to come join A&M and he will most likely be a featured player in 2009.

The Skinny: Tech had a magical season in 2008 but still fell short of a conference title and then lost the Cotton Bowl to Ole Miss. Gone are Graham Harrell and Michael Crabtree but Red Raider fans have no fear as the coaches are even higher on Taylor Potts at the helm.

Value: Poor. Tech has slowly become very respectable in the Big 12 and in national perception. Mike Leach has flirted with leaving each of the past three seasons but still remains in Lubbock. The defense is improved, but there will still be regular shootouts for the Red Raiders as they travel to Texas, Houston, Nebraska, Oklahoma State, and Baylor.