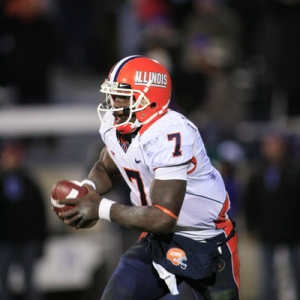 The Big Ten has become the punchline to bad postseason jokes with their recent bowl performances.

This year the conference could be poised to take back their spot as an elite conference with 10 of 11 teams returning at least half of their starters from the 2008 season.

In addition to that, the marquee names return as well -- 10 players from the All-Conference First Team and 16 from the second team are back in 2009.

Illinois (+650 to win the conference, BetUS)

The Skinny: The Illini could have one of the more potent offensive attacks in what is usually a plodder's conference. QB Juice Williams and WR Regus Benn make a formidable duo and the addition of Florida transfer WR Jarred Fayson makes for a dynamic receiving corps. The question on offense is who will step up at tailback. Defense should also be fairly sound with a handful of athletic players to go around.

Value: Poor. Not being able to dodge Ohio State nor Penn State will probably be the undoing of Illinois in the conference race. They certainly have enough talent to get back to a bowl game this season baring an injury to the already thin offensive line.

The Skinny: Read Indiana, think Duke. The Hoosiers are back to earth following their "Play Thirteen" memorial season of 2008. Indiana has a lot of "ifs" coming into this season that will determine its success. If the Hoosiers stay perfectly healthy and they get off to a fast start to the season to build confidence, Ben Chappell can make people forget they kicked Kellen Lewis off the team… then things could be okay in Bloomington.

Value: None. This team has a one-percent chance of winning the Big Ten - and it's only at one-percent because we do live in a world where theoretically anything is possible. This team was hit with the injury bug last season and did not have the depth to make another bowl. The 2009 version looks too weak on defense to keep up with some of the fast-paced offenses they will now see in the Big Ten.

The Skinny: There may be some mojo in Iowa City this season as the Hawkeyes look to build on the excitement generated from the 2008 season. Richard Stanzi is back. Three starters on the offensive line return. And eight starters on a "keep the ball in front of you" defense will be on patrol. Replacing Shonn Greene may be a challenge but the coaches seem convinced they can do it with Jewel Hampton.

Value: Good. Iowa has shown they can play with Penn State - although Happy Valley is a much different place to play than Kinnick Stadium - but the confidence will be there for this team. Road games in Columbus and State College will make or break the season, but Iowa has the talent and the coaching to make the Big Ten a three-team race.

The Skinny: Michigan will be on the outside looking in for a few more years as "RichRod" gets his players in place, but there should be more excitement in Ann Arbor than there was during last season's disappointing 3-9 campaign. True freshman QB Tate Forcier has been on campus since spring drills and looks the part in the offense. Former Syracuse head coach Greg Robinson is back as a defensive coordinator, which should vastly improve the defense immediately.

Value: None. Rodriguez teams do drastically improve in his second year on the job but this season is not one to put action on Michigan to win the conference. Another year in the spread and another year with a 3-3-5 defense and the talk can begin again for the Wolverines.

The Skinny: Javon Ringer and Brian Hoyer are both gone, which means the offense will most likely struggle to move the ball. The offensive line has an entirely new right side, making it harder yet to get in gear. Like many Mark Dantonio teams the defense will need to be the strong suit and for Spartan fans that may be just fine. The back seven look like the strength on the team with the defensive line still needing to jell and get into a good rotation.

Value: None. This team cannot win the Big Ten this year. Dantonio teams are generally sound and play with good fundamentals. This style of play will allow you to win the games you are supposed to but get exposed in games you are outmatched in. That was the case last year with losses to California, Ohio State, and Penn State, and will be the song this year.

The Skinny: Minnesota had the Big Ten's best pass-catch combination last year with QB Adam Weber and WR Eric Decker and those two will need to duplicate the performance for the Golden Gophers to show more improvement in 2009. With the opening of TCF Bank Stadium on campus there is much excitement at Minnesota but their first conference title since 1967 still seems a little out of reach.

Value: None. With all the excitement over the new stadium Gopher fans did not exactly get the most exciting schedule to watch. All four key games - Northwestern, Penn State, Ohio State, and Iowa - are on the road where Minnesota has been historically poor. This could have been a great year if the home crowd could have affected those games, but, alas, this looks like another solid bowl season for Tim Brewster and crew - but that isn't the bet in question.

The Skinny: Northwestern has steadily improved the past few seasons and are actually a .500 football team in Big Ten play over the past six years (24-24). Mike Kafka has shown he can win games with his legs and if he can improve on his accuracy this could be a very good year for the Wildcats. The defense has eight starters back, including the entire secondary, and should improve on last year where the finished in the top half of total defense.

Value: Some. Northwestern can get off to a hot start with a pretty soft first three games before conference play starts. The Cats could actually enter a home game against Penn State undefeated and ranked in the Top 25. Halloween night in Evanston and an undefeated matchup with Penn State would be one of the biggest games ever and if they win that game a conference title is worth discussing.

The Skinny: Ohio State has won at least a share of the conference title for four straight years and a group of four super sophomores do not look for that to change in 2009. The former No. 1 ranked recruit Terrelle Pryor will now be at the helm full time. Out wide will be excellent route-runner and speed-burner DeVier Posey. Anchoring the offensive line are blue-chip recruits Mike Adams and Michael Brewster. While the defense did lose some stars there are only juniors and seniors on the projected starting lineup, so youth will not be an issue on that side of the ball.

Value: Good. Ohio State will once again be the target of media scrutiny if they get beaten down against USC in Week 2. However, baring something remarkable, the conference will be decided on Nov. 7 when the Buckeyes travel to Penn State. Getting money back on a team that has a history of winning, an uber-talented QB, and a stout defensive line sounds like it could be a good return on investment.

The Skinny: Penn State may get roasted over the easy schedule they have this year but the fact of the matter is that you still have to win the games on it. The Nittany Lions have really only two "tough games" on their schedule (Iowa and Ohio State), and both are at home. The potential exists for a Northwestern trap game on Halloween in Evanston. Penn State does have two exciting playmakers in Evan Royster and Daryll Clark but they do need to re-tool an offensive line that lost three starters as well as the receiving corps that lost their three top pass catchers.

Value: Great. Penn State has enough early season cupcakes to get the O-line to jell before a revenge game with Iowa in Week 4. The receiving corps does not have much experience but the players are not young as two seniors and a junior look to fill in the starting lineup. The defense is generally solid and Navarro Bowman and Sean Lee at linebacker pace the team.

The Skinny: Joe Tiller knew when to walk away as this Boilermaker team could be pretty bad. Joey Elliot has patiently waited his turn to take over a quarterback for Curtis Painter but his shoulder surgery has given pause to new offensive coordinator Gary Nord. Another major change in West Lafayette will be on the defensive side of the ball as 12-year defensive coach Brock Spack has left for Illinois State and Donn Landholm has taken the reins and brought his 4-3 style with him.

Value: None. While Purdue is able to avoid both Penn State and Iowa on the schedule they should not have enough firepower on offense to make a run in the Big Ten or get past Ohio State.

The Skinny: Wisconsin has been on a slippery slope since Bret Bielema was selected to take over for Barry Alvarez three seasons ago and if the 2009 campaign doesn't take a step forward Bielema's seat could get awfully hot. Wisconsin has not named a starting quarterback for the season and will look to sophomore RB John Clay to take over for early departure P.J. Hill.

Value: Poor. The Badgers had six games decided by three points or fewer in 2008. The worry is that one of those was a season-ending game with Cal Poly. They then followed up that win by getting blown out in the Champs Sports Bowl by Florida State. The defensive line should be deep this season and could rotate eight players into the fold. They probably do not have the chance to win the Big Ten but could be good enough to keep the head coach around.