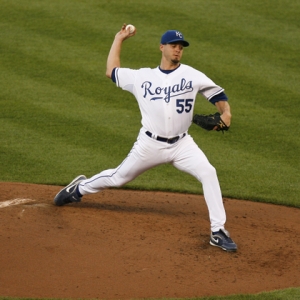 If there is one recurring theme so far in this baseball season it has been disappointing pitchers. Whether it is because of injury or poor performance, there have been many cases this year of guys who have had inexplicably bad performances. Some guys, like Cole Hamels, have worked their way out of it. Some have had good seasons marked by inexplicably terrible outings - Johan Santana comes to mind there. Others, take Chien-Ming Wang and Daisuke Matsuzaka for example, are in a deep hole that they can't seem to find their way out of. Of all the pitchers that haven't lived up to expectations this year, here's a look at the four that are, in my eyes, the most disappointing:

Gil Meche, Kansas City - The Royals came into this season with high hopes in a weak AL Central. We should know better by now than to trust Kansas City. They are, as always, underperforming and wasting their not insignificant amount of talent. Chief among the culprits is Meche. People were surprised when the Royals paid Meche ace money a couple of years ago, but he had shown real progress, and made it possible to believe that he might actually earn the big payday. Last year he was 14-11 on a team that wasn't great, and the team was 19-15 when he started. That made him a highly profitable bet on the season. He should have been even better this year - the team behind him is deeper and more experienced, the rotation is solid, and the bullpen is upgraded. He's only 30, too, so he's in his prime for a pitcher. Instead of meeting expectations, though, he has burned bettors' money. His 4-6 record isn't terrible, but it's also flattering - the Royals have won just five of his 15 starts. His control isn't as crisp as it can be, and that has led to more walks, fewer strikeouts, and a higher ERA.

CC Sabathia, New York Yankees - It was going to be tough for Sabathia to be profitable this year given the expectations that he faced because of his new team and his massive contract. Still, it didn't seem unrealistic to expect him to build on the dominance he showed last year. Not so much. There are only three starters in the league who have been less profitable than Sabathia this year, and one, Daniel Cabrera, was so bad that he is now out of baseball. The Yankees are 7-8 when their supposed ace hits the mound - hardly good enough considering the firepower backing him up. He's not striking out as many as he usually does, and he is giving up too many walks. That highlights what is the most concerning - he doesn't seem to have done the work and preparation that you would think a contract like this would inspire a guy to do. He looked flat and uninspired right out of the gate, and he has yet to show a real killer instinct. It didn't make sense to expect him to be wildly profitable, but expecting him to be focused and sharp shouldn't have been too much to ask.

Roy Oswalt, Houston - The Astros are pretty lousy, so Oswalt gets a bit of a pass on that front. Still, Oswalt is one of those guys - like Roy Halladay - that you always expect to be consistently good regardless of how frustrating his team is. That hasn't been the case this year. Oswalt's ERA is more than a run higher than it was last year, and last season's mark was already his highest in four years. After having never had a record below .600 in his entire career, he's sitting at just 3-4 this year - a .428 mark. The team has an identical win percentage when he starts - they are 6-8. His strikeout-to-walk ratio isn't what it has been in the past, either. There are all sorts of excuses for Oswalt -- injury and inconsistent run support chief among them - and everyone is allowed to have a bad year at some point. Still, you can't help but be disappointed when a guy who seems so reliably unflappable wavers as badly as Oswalt has this year. He, like Albert Pujols and Ichiro Suzuki, was one of the consistencies in a wildly inconsistent sport.

Daisuke Matsuzaka, Boston - He gets mentioned in the same breath a lot as Chien-Ming Wang this year, but at least Wang has an excuse. The Yankee was hurt for the second half of last season, while Matsuzaka came off a brilliant 18-3 campaign. This year he has been truly awful. His control and velocity have both slipped, and it shows in the boxscore - he is 1-5 in eight games, and he has just once shown glimpses of what we saw last year.

There are two things that make his case particularly frustrating. First, there was no hint of the possibility of it. He was so good last year, and we'd heard legendary tales of his stamina and ability in Japan, so it didn't seem at all risky to assume he'd be healthy and ready for a big year at 28. Next, we don't really know what is causing the problems. He was more than fine in the World Baseball Classic this spring - he was named MVP - so he was healthy in the spring. He's on the DL now with an alleged shoulder issue, but the way the team is talking about the issue it seems like it is more mental than physical. Whatever the cause, he has totally bottomed out, and has crushed the hopes of many bettors along the way.