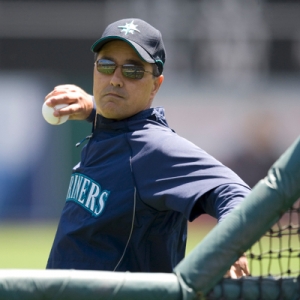 Don Wakamatsu may not be having the same level of impact that Ichiro Suzuki had in his first season in Seattle, but he's still doing pretty damn well.

"Wacky," as absolutely no one but me calls him, has been the man behind the scenes of the Seattle surge through the first half of the season. And like an Asian Mob boss he's done so with a subtle touch and some smoky, back-room moves that may not have gained national attention but that have been effective in helping his squad produce.

Wacky has taken a team that really has lacked an identity over the last decade and molded it into a typical small-ball, fundamentally sound, low-scoring grinder that you can find out West. The Mariners have gone old school: relying on great pitching, clutch hitting, and The Little Things like sacrificing and stealing bases to position themselves as one of the more profitable teams in the Majors. On top of that, Seattle is presently 39-36 and just 3.5 games out of first place in the tight American League West.

The Mariners have been hot lately as well, winning nine of their last 13 games since being swept by the red-hot Rockies in Colorado back at the start of June. Granted, five of those wins came against the weak sisters in San Diego. But Seattle actually went into Los Angeles and beat the Dodgers, which is a feat that only a couple teams have managed this season.

What is impressive about what Seattle has accomplished is the fact that they can't hit for schism. Seattle is No. 29 (of 30) teams in runs scored at a paltry 3.88 runs per game. They are also an absolutely pathetic .162 - good for last in the world - with runners in scoring position and two outs. Besides the ninja in right field, Seattle is leaning heavily on Russell Branyan and his 19 home runs for punch. You know, because that's going to last.

But Seattle wins games with clutch hitting and by manufacturing runs like Nike manufactures broken dreams in Malaysia. Seattle is very solid at No. 11 in the Majors in batting in the seventh inning or later (.259). They are also No. 1 in the American League (No. 6 in the Majors) in sacrifice hits and they are No. 5 in the league in sacrifice flies. They are also in the top half of MLB in steals so they have been doing it the little way.

The end result: Seattle's 19 wins in one-run games are by far the most in the Majors, as is their 32 total games decided by one run.

Eventually, playing in so many tight, seesaw, could-go-either-way games wears on a team and backfires against them. And considering that the Mariners have really maxed out the light talent that they have I would expect a similar fade in the second half out of Seattle. But there is something about this M's club that is very comfortable playing in tight games. And they seem to have a little of that magic about them when playing at home, where they are a solid 21-15 (best in their division).

And the bread and butter of this team has been its pitching. Led by stud No. 1 Felix Hernandez and resurgent Jarrod Washburn the Mariners are No. 3 in the Majors with a 3.65 team ERA and they are No. 5 in the league with a 1.33 WHIP. Seattle has used nine different starting pitchers already, but their top five relievers all have ERA's under 3.30 and the team's bullpen ERA is exceptional at 3.16 (No. 2 in MLB).

Pitching and small ball; that has been the recipe for the Mariners this season. However, the problem with playing small like that is that eventually the magic may wear out and the fact that this team can't hit and isn't very good in the field will really limit them in the second half of the season.

Also, for all of the good fortune that has found the Mariners this season there is already some rain falling. Adrian Beltre, the Gold Glove third baseman, cleanup hitter, and one of the veteran leaders of the bunch, is out for 6-8 weeks with a shoulder injury. Beltre is virtually irreplaceable because there are only a half-dozen or so third sackers in the league that are a better all-around player than he.

Seattle has been a great wager and a fun team to follow through the first three months of the season. I don't think it's going to last. But the Mariners are following Wacky's lead and playing a brand of baseball that is really tough to keep down for long. Seattle has been a strong 'under' play this season (30-45-2) and will likely remain one. But don't shy away from jumping on the M's has a live dog in certain situations.

They aren't ready for the Big Time. But a new leader and a fresh approach definitely have Seattle as a team to keep an eye on moving forward.