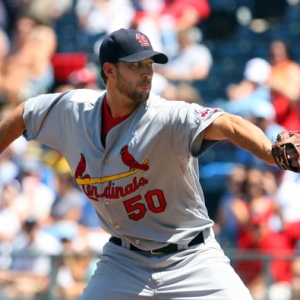 The betting public, as a general rule, is predictable - unless there is a really clear reason not to they are probably going to favor the home team. That means that among the smart bettors' biggest allies are strong road pitchers that fly under the radar. If a guy consistently does well away from home without attracting a lot of attention to that success then he's almost sure to provide real value to those who back him. The top pitchers with the gaudy records are going to be successful on the road - guys like Tim Lincecum and Felix Hernandez are successful everywhere. Here's a look at five guys who aren't exactly public favorites, but who are very strong pitching away from their home stadiums:

Adam Wainwright. St. Louis - Wainwright is less of a surprise on this list than the other four still to come. He's putting together a strong statistical year featuring a 10-5 record, and the Cards have won six of his last seven starts. He's worthy of inclusion for one very big reason, though - no pitcher has won more games on the road this year. In fact, Wainwright is almost two different pitchers - a stunning 7-1 on the road, and a lackluster 3-4 at home. He hasn't just been beating up on weaklings, either - he has two road wins each against division rivals Milwaukee and the Cubs. Being successful on the road is nothing new to Wainwright - he was 4-2 in an injury-shortened season last year, and 7-4 the year before. Despite that pleasing consistency, Wainwright is still a pleasure to bet on - the team has won eight of his nine road starts, and he has paid even money or better in five of them. It's not hard to make money with a pitcher like that.

Brian Moehler, Houston - At first look, there isn't a whole lot to love about Moehler. His 6-5 record is nothing special, and his 5.08 ERA is kind of scary. He shines away from Houston, though. He's 5-1 on the road, including five straight wins. He also sports an ERA that is almost a full run lower on the road than it is overall. He has benefited somewhat from the schedule - his recent road wins have included duds like San Diego, Arizona, and Pittsburgh. The teams he has faced at home haven't been exactly world-beaters either, though, so there is definitely a home-road discrepancy ripe for exploitation here. This road success is a relatively new thing for Moehler - he was an ugly 2-7 when he was with the Marlins in 2006.

Scott Feldman, Texas - Feldman has just been a pleasant surprise overall this year. After going just 6-8 last year in his first year as a starter, Feldman has blossomed this year - he's 8-2 at the all-star break, and has a decent 3.83 ERA. As good as he has been. he's been even better on the road where he sports a 5-1 record. Two of those five wins have come against division rivals, and the Rangers need all the wins they can get against other AL West squads if they want to stay in the playoff race. It's a bit of a concern that Feldman's ERA on the road is 0.23 runs per game higher than at home, but Texas scores enough runs that it obviously works for him. Feldman's season would be even more impressive if June 8-19 never happened. Over that three-start stretch he lost two games including one on the road, and the Rangers lost all three. It's a promising sign for a young pitcher that he has bounced back very strong from that brief dark period.

Jeff Niemann, Tampa Bay - Niemann, a 6-foot-9 giant in stature, is a useful pitcher on a hot streak - he's 6-1 in his last 10 starts. He's also been a real weapon on the road - the Rays have won eight of his last nine road starts. Overall, he sports a very solid 5-2 road record, and it's even more impressive when you consider that one of those losses came in the very first start of the season, and he allowed six runs in five and a third innings in that outing, so his decent 4.08 road ERA has been a very good 3.40 since then. The most impressive thing Niemann has accomplished on the road this year? Last time out he allowed just one run in seven and a third to outduel Roy Halladay in Toronto.

John Danks, Chicago White Sox - Danks, like Moehler, is a guy who has an overall record that disguises his road prowess well. He's just 7-6 overall, but on the road he is a very solid 5-2. More than the other four guys on this list Danks has issues with consistency - he can't be trusted to follow up a good outing with another one. The White Sox have been the underdogs in each of his last six starts, though, so you can tolerate a bit of inconsistency when you get paid well for the wins.