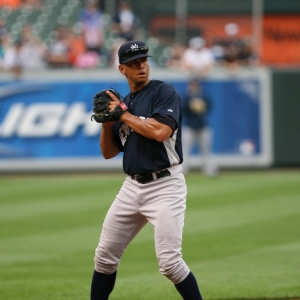 It's the final day of June, which means it's the final month without football - if you count reporting to training camp as the start of football season. Of course we'll start hitting gridiron topics hot and heavy soon (the weekly survivor pool column will be back this fall, for example), but we'll continue to dole out the advice on baseball right through November, too.

With that said, here is a look at two series prices from BetUS for series that begin tonight and provide good value:

Arizona Diamondbacks (+115) at Cincinnati Reds (-145) -- The numbers all say to bet on Cincinnati here. After all, the Snakes are one of the worst clubs in baseball and were swept by these Reds in the desert from May 11-13. Cincy has won 11 of the last 13 meetings between the two overall.

Plus, Arizona has lost a season-high five games in a row and eight of 10. The Diamondbacks' .245 batting average is second-to-last in the National League, and they also rank last in the NL in fielding percentage - having committed 27 errors in the past 18 games.

The pitching hasn't been much better, but this series shapes up well for Arizona with ace Dan Haren (6-5, 2.25) going tonight in Game 1. He is among the NL leaders in ERA, strikeouts, innings pitched and batting average against.

Meanwhile, Cincy starter Bronson Arroyo has been torched of late. He is 1-3 with a 6.51 ERA this month and didn't make it out of the fourth inning in his last start. Arroyo is 1-2 with a 5.97 ERA in seven starts against Arizona for his career.

The series finale pits Cincinnati's Aaron Harang against Arizona's Doug Davis, and that's about a wash.

Look for Arizona to win two of three in this series.

Seattle Mariners (+275) at New York Yankees (-375) - The Yanks are kind of like Southern Cal in football or Duke in basketball in that oddsmakers seem to always overvalue them just on name value alone.

Sure, the Yanks have won five games in a row, but that was against weak-hitting NL teams like Atlanta and the Mets (the Mets more so because of all their injuries). And the bullpen has been great of late, with Mariano Rivera getting his 500th career save on Sunday (he came in during the eighth inning, so does that make him unavailable tonight?) and the pen going 1-1 with a 1.60 ERA in 39 1/3 innings in the last 13 games.

But Seattle has been slowly climbing in the NL West and just took two of three from the Dodgers, who have the best record in baseball. The M's have won nine of 12 overall. Unfortunately, the Mariners won't have third baseman Adrian Beltre in this series or 4-6 weeks due to shoulder surgery. And ace Felix Hernandez doesn't pitch against the Yanks.

But the pitching matchups are not too one-sided, which means at +275 Seattle might be worth a look. Brendan Morrow starts tonight against Joba Chamberlain. Morrow is a starter-turned-closer turned-reliever again who is 0-0 with a 4.50 ERA in his three starts. But he has excellent stuff and won't be on a pitch count for the first time tonight. He actually took a no-hitter into the eighth inning when he started against the Yanks last September.

Joba Chamberlain goes tonight for New York, and we all know how inconsistent he can be with his control; Joba is 0-2 with a 1.55 WHIP and 5.18 ERA at home this year. He also has walked 21 batters in just 33 IP at Yankee Stadium. He is followed by Andy Pettitte and CC Sabathia. Seattle goes with Jarrod Washburn in Game 2, and his numbers are better than Pettitte's. Jason Vargas goes against CC Sabathia in the finale, and obviously the Yanks will be heavily favored to win that one.

That New York lineup might be a tad out of whack as it gets to use the DH for the first time in nine games. That means Hideki Matsui has to brush off the rust. Also know that a flu bug seems to have hit several Yankees, although Johnny Damon is expected to return tonight from illness.

It's not out of the question that Seattle steals the first two games of this series.