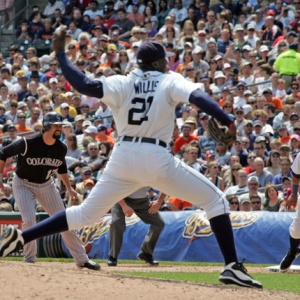 In what should be a semi-regular feature during the summer months, I'm going to take a look at upcoming baseball series and share my inclinations when it comes to betting the series prices at various books.

Today, Bodog give three series prices for three series that begin on Thursday: Detroit Tigers at Baltimore Orioles, Los Angeles Dodgers at Chicago Cubs and Atlanta Braves at Arizona Diamondbacks. Be aware that although these are all four-game series, the prices are just for the first three games.

Here's a look at each:

Tigers (-130) at Orioles (Even): Detroit is coming off a road series win at Kansas City, with the lone loss coming to Zack Greinke, which is pretty acceptable these days. Despite sitting in first in the AL Central, the Tigers are below .500 on the road. However, they are 4-4 in road series this season, and that includes counting a loss in a two-game set at the White Sox in which one game was rained out. The Tigers have won nine of their past 12 games since they were swept by the Twins in the middle of May.

Baltimore, on the other hand, is pretty good at home. In fact, the Birds are the only last-place team with a winning home record (14-11). And they enter this one off a three-game home sweep of the sinking Blue Jays. Perhaps the big news for the Orioles will come Friday, when the top prospect in baseball, catcher Matt Wieters, will be activated from the minors.

It's hard to bet against Detroit here because you almost have to assume the Tigers win Saturday's game because ace Justin Verlander is starting. He won his past five decisions and gave up one earned run or fewer in four of them. And resurgent Dontrelle Willis starts on Friday against Brad Bergesen, which appears to be a mismatch.

This is the first series of the season between these two.

Dodgers (Even) at Cubs (-130): Chicago has won two games in a row following an eight-game losing streak, but those two were against a Pittsburgh team that the Cubs have owned. L.A. has the best record in baseball and enters off a sweep of the Rockies.

Looking at the pitchers, it would seem to favor Chicago. Thursday's L.A. starter, Randy Wolf, has a career 3-7 record with a 4.71 ERA in 15 career starts against the Cubs. He's opposed by Randy Wells, who is holding opponents to a .219 average in his three big-league starts. On Friday, the Dodgers start their ace, Chad Billingsley, against up-and-down Ted Lilly. Billingsley has a 1.63 ERA in four road starts. Thus, this series, from an odds perspective, likely comes down to Eric Stults against Ryan Dempster on Saturday. And while you might assume Dempster here, he hasn't been the same at home in 2009 with just a 5.25 ERA at Wrigley. Add that to a 5.21 ERA in day games, as Saturday's is, and the Dodgers might be the good play in this series.

The Cubs won five of seven in the 2008 regular season against the Dodgers but then were routed in the NLDS.

Braves (-125) at Diamondbacks (-105): At first glance, with Atlanta coming off being swept in San Francisco, these odds seem a little, well, odd. But the Braves have an above .500 road record, and the Snakes lead the league in home losses, including just dropping two of three to San Diego.

Atlanta had just five runs in the series against the Giants while getting held to 16 hits, and then they had to travel to Phoenix. But the Braves have their pitching lined up just as they want it with Derek Lowe, Jair Jurrjens and Javier Vazquez in the first three games. Lowe has been one of MLB's best pitchers, while Jurrjens has given up more than three earned runs just once this year. Add to that the Diamondbacks' bullpen has been shelled for the past four games, and Atlanta is the smart choice.

These teams split a two-game set at Atlanta in mid-May, but the Braves have won four of the last five meetings in Phoenix.